One of my favorite CDs of 2009 was saxophonist/composer Marcus Strickland's "Idiosyncrasies", issued on his Strick Muzik label.  Recorded on December 1, 2008 with his brother E.J. (drums) and Ben Williams (bass), the trio played music that crossed multiple boundaries ("pop" covers, jazz covers) in such an inviting manner.  The combination of melodic invention, rhythmic excitement and strong solos made for great listening. 17 days later, the trio, with the addition of pianist David Bryant, recorded the equally compelling "ballads album", titled "Of Song", for the Dutch Criss Cross label.

The Brothers Strickland (identical twins, by the way) and Mr. Williams will be performing Friday May 14 at Firehouse 12, 45 Crown Street in New Haven.  Both brothers keep a busy schedule, Marcus with Dave Douglas's Keystone and E. J. with Ravi Coltrane's Quartet.  Together, they make music that hearkens back to the sounds of Sonny Rollins and, thanks to the quality of the repertoire and musicianship,  is still quite contemporary.  They'll play 2 shows, 8:30 and 10 p.m. - for ticket information, call 203-785-0468 or go to www.firehouse12.com. To learn more about Marcus Strickland, go to www.marcusstrickland.com.

Received an email from guitarist/composer Mike Baggetta to let me (and other) bloggers/reviewers know "that I am trying to raise funds to reissue my first album 'Canto' - 9 original pieces for solo prepared guitar.  I've always felt that this album was an important mark in the development of my musical identity and the time has come to make this music available again!  It was originally issued on the now defunct NJ label Optical Sounds as a CDR.  This reissue will be self-released giving me complete control over the remastering, pressing and presentation of this work." 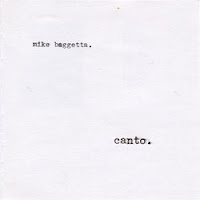 He's suitably proud of this work, recorded in 2003, and, honestly, there's very few recordings like it. Influenced by the work of British guitarists such as the late Derek Bailey and Fred Frith, Baggetta created these pieces by "preparing" his guitar to alter the sound.  Many of the pieces are quite stark and some have the sonic quality the of Mississippi Delta blues, circa 1930.


If you wish to get involved, click on the following -
http://www.kickstarter.com/projects/mabnotes/reissuing-canto-reviving-original-music-0  and follow the instructions.
Posted by Richard B. Kamins at 6:22 PM