Let's Swing In This New Year!

Posi-Tone Records co-owner and A&R man Marc Free loves music that swings, songs based on good melodies with rhythm sections that can play any style, and front-line musicians with strong voices.  Over the past several, Free has been organizing ensembles made up of musicians who record for the label plus newer artists. The material is often a blend of new and old tunes, many of which appear on other Posi-Tone albums as well as the occasional jazz "standard." Three years ago this month, the label released the first album by New Faces, a sextet featuring Roxy Coss, Josh Lawrence, Behn Gillece, Theo Hill, Peter Brendler, and Vinny Sperrazza, all of whom have issued albums on Posi-Tone.   Now Free has chosen six more musicians –– Caili O'Doherty (pictured above, piano), Brandon Lee (trumpet, flugelhorn), Markus Howell (alto saxophone, flute), Nicole Glover (tenor sax), Adi Myerson (bass), and Cory Cox (drums) –– as the new faces of the group. 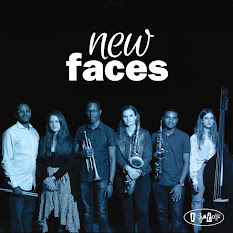 "New Sounds" is this group's debut and, like its predecessor, it's a soulful romp through the world of "straight-ahead jazz."  Also like its predecessor, the band is composed of top-notch soloists. Ms. O'Doherty, whose 2015 album "Padme" was quite impressive, is a stalwart throughout.  The Israeli-native Ms. Myerson is a powerful, foundational, bassist whose solos are melodic gems.  Ms. Glover has worked with Esperanza Spalding plus recorded with pianist George Colligan, has developed into a powerful soloist while Howell, a graduate of Michigan State University (where he studied with trombonist Michael Dease), has a sweet tone on alto sax.  Brandon Lee and Cory Cox were both raised in Houston, TX; the former has taught at his alma mater (the Juilliard School) and the University of North Carolina/ Greensboro while the drummer has toured with the Dave Brubeck Quartet where he teaches private lessons and leads workshops.
Trumpeter Lee's (pictured left) "Shades of Brown" kicks off the 10-song program.  It's a medium-tempo blues, the composer leads the saxophones in and plays the melody as the reeds harmonize.  Cox's dancing cymbals are a highlight, especially during the trumpet solo. Note how the bass and piano lock in under the alto solo; the drums and bass lock in as Ms. O'Doherty steps out. Ms. Meyerson contributes two sweet ballads. "Afloat" possesses a gentle flow and a fine melody which the trumpet and alto sax states while the tenor sax plays counterpoint.  Ms. Glover steps right into her solo followed by a generous piano turn.  The bassist (pictured below) also composed "Hold My Heart", a song that may remind some of the writing of Robbie Robertson (listen to the chords changes and the descending bass line in the verse).
Other than two tunes from vibraphonist Gillece and one from bassist Brendler, the rest of the tracks are originals from the newer Faces.  Howell's rollicking "Second Wind" features a thunderous drum solo while Ms. Glover's "Blues for Tangiers" is a lowdown blues ballad; the composer creates quite a strong statement while Howell and Lee have quite a call-and-response with the tenor in the following chorus.  Ms. O'Doherty's "Runaway" is also a blues ballad, this one with overtones of Charles Mingus. The piano solo is powerful as is the trumpet spot that follows.
"New Sounds" stands out for the quality of both the compositions and the musicianship.  The first edition of New Faces did a number of live dates (ahhh...the good old nights) and one hopes to see this group in action. In the meantime, start this year on a good foot and get lost in these "New Sounds."
To hear more and to purchase the album, go to https://newfacesjazz.bandcamp.com/.
Here's the lovely ballad "Afloat": 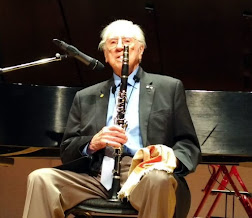 A strong case can be made for clarinetist and composer Phil Nimmons as "the father of Canadian Jazz." The native of British Columbia, Nimmons was born in 1923 in British Colombia and started college as a pre-Med major.  He decided to follow his passion for music to the Juilliard School in New York City and then to the Royal Conservatory of Music in Toronto, Ontario, Canada.  He formed Nimmons 'N' Nine in 1953, a group that would eventually tour throughout his native country and beyond for the next 27 years. Perhaps his most famous work, "The Atlantic Suite" (credited to Nimmons 'N' Nine Plus Six), was issued by Sackville Records in 1974, winning numerous awards. Before that, the group had recorded for RCA-Victor and Verve.  After Nimmons ended the group, he toured and recorded with small ensembles plus dedicated himself to teaching at the University of Toronto. He retired from teaching at the age of 96 and remains in good health. 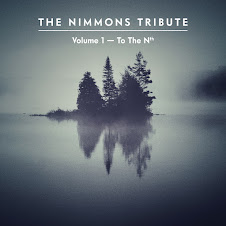 His grandson Sean Nimmons (piano, Fender Rhodes) has put together an eight-member ensemble comprised of former students, colleagues, and friends of his grandfather, dubbing the octet The Nimmons Tribute.  The group's self-released debut album, "Volume I –– To The Nth", recreates songs from throughout the elder Nimmons career plus adds one piece by Sean.  What a fine band –– Kevin Turcotte (trumpet, flugelhorn), Tara Davidson (alto + soprano saxophones, clarinet), William Carn (trombone), Mike Murley (tenor saxophone), Perry White (baritone saxophone, bass clarinet), Jon Maharaj (bass), and Ethan Ardelli (drums) –– each one active on the Canadian scene.  The album was recorded during the pandemic yet the music reflects the composer and musicians belief that music is the best way to fight through the pain, boredom, and fear of the current times. 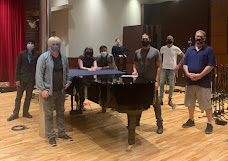 The program kicks off with "Nufsicisum" which, read back to front, is composer Nimmons philosophy on his choice of his path through life.  The easy swing of the rhythm section points to the influences of West Coast (US) Jazz with a generous hint of Duke Ellington/ Billy Strayhorn in the melodies and arrangements. "The Atlantic Suite" is represented by "Harbours", another easy swinging tune graced by the fine alto work of Ms. Davidson and grandson Sean's gentle Rhodes work. When everybody jumps in for a stroll through the verse, the ensemble sounds twice its size. Ardelli gets a fairly "hot" solo before the Rhodes solo calms down the proceedings in time for Turcotte's trumpet to begin ramping up the temperature. 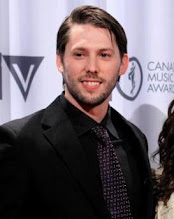 Sean (pictured left) dedicates "Rista's Vista" to his grandfather; Rista is the elder Nimmons middle name. The piece jumps along thanks to the solid work of Maharaj and the fine drumming and cymbal work of Ardelli.  The lovely ballad "Holly" (composed for Nimmons daughter) opens with the melody played by White on bass clarinet. The second verse goes to Ms. Davidson's soprano sax and she yields to all the brass and reeds expanding the melody as well as the harmonies.  Ardelli's smart stick work enlivens "Sands of Time", an episodic piece that features fine solos from the pianist and Mike Murley.
"Volume I..." closes with "Liëse", another lovely ballad that adds Drew Jurecka (violin, viola) and Lydia Munchinsly (cello) while subtracting the reeds and brass.  The music has a cinematic quality plus features solos from the pianist and bassist, a handsome way to end an album that pays tribute to a master of melody. 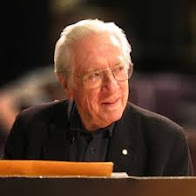 This "Tribute to Nimmons" is a good introduction to the music of Phil Nimmons and should lead one to explore the music he recorded over his long career. What one gets on the album project spearheaded by his grandson Sean Nimmons-Paterson is more than a testimonial; it's a reminder that this American music crosses borders with ease, capturing musicians and composers, allowing them the freedom to use myriad influences and make something new.
For more information, go to https://www.nimmonstribute.ca/.
To hear the album plus purchase it, go to
https://nimmonstribute.bandcamp.com/.
Posted by Richard B. Kamins at 11:59 AM