The Season of the Large Ensemble

One would not be out of place writing that Jacob Garchik is a unique presence on the contemporary music scene. He plays trombone, tenor horn, tuba, and accordion, has played with the likes of Anthony Braxton, Henry Threadgill, John Hollenbeck, Darcy James Argue, Laurie Anderson, and Mary Halvorson plus many others.  He has arranged for numerous vocalists including kd lang, Rhiannon Giddens, Sophie Von Otter, Natalie Merchant, and Angelique Kidjo.  Over the past 14 years, Garchik has contributed a dozens of arrangements and transcriptions for Kronos Quartet. He's also a member of The Four Bags, the delightful ensemble that eschews genres for a mix of fascinating sounds. 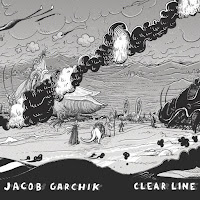 In 2005, Garchik started his own label––Yestereve Records––and has issued five fascinating albums, including two trio dates, one for a trombone choir (2012's "The Heavens: The Atheist Gospel Trombone Album"), and 2015's "Ye Olde" for trombone, drums, and three electric guitarists. His latest recording, "Clear Line", features a large ensemble consisting four trumpets, four trombones, five saxophones (two alto, two tenor, and one baritone), and no rhythm section.  Nary a chordal instrument in sight.  The music, all Garchik originals, is fascinating from the opening note right through to the end. The title refers to the "Ligne Claire" style of drawing. Pioneered by French author and illustrator Hergé (1907-1983, the creator of "Tintin"), the drawings combine cartoon characters with "natural" backgrounds.  Garchik, who does not play on the album but who is the conductor, has also developed an interest in architecture, not surprising as an arranger, among other things, needs to understand the framework of the music and what each composition will support.

What will the curious listener hear on "Clear Line"?  Nine pieces that feature crisp playing, intelligent and witty arrangements, and a distinctively fluid blend of styles. The album opens with the rippling phrases of "Visualizations of Interior Spaces" which the gives the music the feel of a fanfare. There are also moments that the listener can sense the growth of a new structure.  "Ligne Claire" has a modern classical sound yet one could hear a touch of Bob Brookmeyer in the blend of the sections' phrasings.  Long tones with just a touch of dissonance stand out on the ballad "Hergé: Vision and Blindness" while an infectious rhythm can be felt throughout the opening section of the delightful "Moebius and Mucha"––the latter track breaks down at several times for short solo statements. The composer celebrates the "Line Drawings of Paul Rudolph", the American architect (1918-1997) who was considered one of the leaders of the Modernist Era. It's a slow ballad that moves into a darker tone as the piece develops.

The album closes with the title track. A lively piece, the melody is shared by the different instruments in a playful vein. The ensemble plays around with the rhythmic flow, bouncing beneath the solos, stopping to play an elegiac section, which is interrupted by the playful bouncy opening section then returns to the slower tempo. The two distinct "feels"––bouncy then slow––go back and forth changing somewhat each time.

"Clear Line" is such an enjoyable journey. The project should open your mind to the creative genius of Hergé and Paul Rudolph plus gives another glimpse into the creative world of Jacob Garchik.  Take your time with this music as it's well worth the adventure.

For more information, go to jacobgarchik.com. To purchase the album, go to https://jacobgarchik.bandcamp.com.

Alto saxophonist/ bass clarinetist Andrew D'Angelo is a musician who can light up a room with his incendiary musicianship, His solos can rise from a whisper to a shriek, raining down phrases, riffs, wails, on the listener.  His fiery approach to creative music has been evident since emerging on the scene in the late 1980s and early 90s.  With fellow saxophonist Chris Speed, drummer Jim Black, and guitarist Kurt Rosenwinkel, he toured clubs and concert halls as Human Feel. They recorded three albums in the 90s before going their own ways, regrouping to record in 2007 and, again to tour Europe in 2017 resulting in the album "Gold", released on Intakt Records in 2019. D'Angelo has also worked and recorded with Jamie Saft, Cuong Vu, Erik Friedlander, and was a long-time member of the Matt Wilson Quartet. 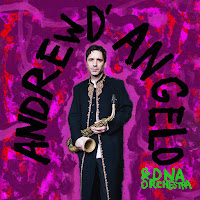 In 2008, D'Angelo suffered a seizure and collapsed, was rushed to the hospital where it was discovered he had a brain tumor. That resulted in two surgeries and removal of his right temporal lobe. The saxophonist went the route of alternative healing.  He returned to music as soon as possible, began writing pieces for a large ensemble, and the results can be heard on "DNA Orchestra" (Human Use Records). The 12-member ensemble (plus two guests) features the cream of the crop of fiery younger players, many based in New York City, all of whom are either leaders or co-leaders.  The nine tracks are all D'Angelo compositions, filled with emotional passages, powerful solos, the occasional loud noises and screeching as well as poignant vocals, and a deep desire to communicate.


The 64-minute program, recorded live, can best be described as "raucously joyful and joyously raucous."  Yes, there are quiet moments there and there, especially on "I Love You". The piece has a sweet melody sung by the leader – the arrangement for the orchestra does a great job of framing the vocal as well as filling out the sound. The leader's alto sax lines at the opening of "FELICIA" are heart-felt as they lead in to the lovely viola tones supplied by Nicole Federici.  The sections then enter playing the melody in a style that resembles Abdullah Ibrahim's South African sounds. The band joins in on the lyrics ("Love Felicia") before D'Angelo's strong solo. Strange sounds, courtesy of the human "beat box" Eric Biondo, are heard at the onset of "Big Butt". Drummer Dan Weiss joins the fun leading the band in with a modified James Brown rhythm attack which is echoed in the sections reading the melody.  The forward motion of the rhythm section dares you to put on your dancing shoes. Weiss again kicks up a storm on "Marching Fvckers", its chaotic horn lines hearkening back to the arrangements of the late Fred Ho as well as Pierre Dorge's New Jungle Orchestra. Josh Sinton's baritone sax solo roars atop the thundering ensemble.


The ensemble romps through "Meg Nam Sa", one of the pieces that came out of D'Angelo's healing process. Again the band roars, goosed forward by the rhythm section with a number of hard-edged solos, building in intensity like a Category 5 hurricane. Weiss's thunderous solo serves as a preamble to a blustery, stunning, finish. It's the final track and that's good as the listener will probably be as spent as the band members.

"DNA Orchestra" is quite an experience. Andrew D'Angelo, along with his very talented friends, create music that is joyous, noisy, exciting, filled with delicious section arrangements, all underpinned by Dan Weiss's drums and Trevor Dunn's great electric bass playing.  Not for the faint of heart but definitely for the adventurous listener––play it loud!!


For more information, go to www.andrewdangelo.com. To purchase the album (and other D'Angelo recordings), go to https://andrew-dangelo.bandcamp.com/album/dna-orchestra.