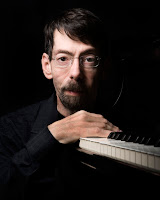 Fred Hersch, pianist and composer, has had a most successful career.  His generation of musicians was among the last to grow up in a time when you work with an older musician serving as a mentor, travel the United States, get a recording contract, play constantly, testing your powers of improvisation and accompaniement. By the mid-2000s, Mr. Hersch had a large following, was traveling the world –– he had publicly acknowledged that he was gay and had been suffering from the long-term effects of HIV-AIDS. His condition was kept in check by a mixture of medications which allowed him to continue to perform, to teach, and to record. But, something went wrong in the Winter of 2007-08 and the pianist soon became quite sick –– originally, his doctors were able to fight the condition but it worsened to the point that Mr. Hersch stopped eating, became painfully ill and, to save him while they helped his system right itself, he was put into a medically-induced coma for two months. 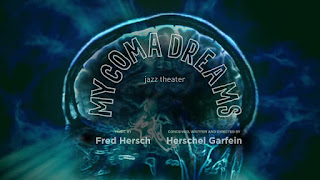 The pianist recovered but it took may months of physical therapy, rest, and relearning the basics (eating, walking, etc) as well as finding his way back to the piano –– he was left so weak by the debacle that there was the fear he would never return to music, let alone t other daily activities.  Happily for Mr. Hersch (and for his many fans), his abilities returned to the point where, within 18 months, he had returned to performance, composing, and teaching. Unlike many coma survivors, the pianist actually remembered a number of vivid dreams during the time he was, technically, "dead" to the outside world.  Soon, he had sketched out melodies, harmonies, and his memories. With the help of librettist Herschel Garfein (who also directed the performances), Mr. Hersch began to make his dreams come to life. Soon, the pair had created an eight-song program for an 11-piece ensemble plus narrator (see personnel below).

"My Coma Dreams" never became a vehicle for touring but was performed several times with one presentation at the Miller Theatre on the campus of Columbia University in New York City recorded as a DVD in March 2013.  If you do not own the video, released in 2014 by Palmetto Records, you can watch the entire performance free on YouTube beginning this Friday, July 17 2020 and will be free indefinitely (the link is listed below as well) –– in fact, you should it and not just because it's being presented free of charge but because it's an amazing piece of musical theater (kudos to actor Michael Winther on his powerful performance).


Go to www.youtube.com/watch?v=f1e-AynJvhk&feature=youtu.be, put in your ear buds or put on your head phones, and get lost in these "...Dreams."