Saxophonist, clarinetist, and composer Byron Asher moved to New Orleans a decade ago to attend college and earn his MMA (Masters of Musical Arts).  The Maryland native became so engrossed in the sounds of the city that he has stayed.  He currently co-leads several groups and is a member of several others.  Like many transplants to the Crescent City, Asher has become absorbed in how the music, the city, and the citizens are all intertwined. Thanks to an Artist's Residency that the composer received from Tulane University, Asher not only had the time to write music but also create an Oral History project with the elders of New Orleans clarinet players.  He created a 10-member ensemble including four reed players, three brass (including cornet, trombone, and sousaphone), piano, bass, and drums – see list below. 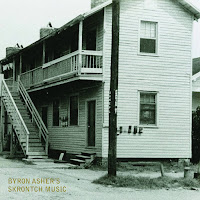 Asher and the ensemble went into the studio in winter of 2018 and the results can be heard on the album "Brian Asher's Skrontch Music" (Sinking City Records).  The name "Skrontch" is not native to New Orleans but is the title of a 1938 piece by Duke Ellington that he used on his experiences working in Harlem's Cotton Club (check out Duke's version here).  Asher's recording is composed of five original pieces, with most of them including pre-recorded voices, old recordings, excerpts from musician interviews, etc.  The first track, "Blues Obligato", opens with the ensemble quietly in the background as recordings by Bessie Smith, King Oliver, Mamie Smith, and others weave together in a sound collage. Slowly the ensemble takes over with various instruments rising to the top of the mix. When that section is concluded, the three clarinet players play an unaccompanied somber melody for a moment before James Singleton's funky bass and Steve Glenn's sousaphone mesh with drummer James Thibodeaux to create a funky rhythm.  The main melody, really one long line repeated over and over by different instruments with a touch of counterpoint, slowly opens up for a solo section that features a call-and-response featuring the clarinet of Aurora Nealand and the trombone of Emily Frederikson.  The other front lines return and we hear a collective improvisation.

"Aural History" opens with a handsome ensemble melody before the music fades and is replaced by several different voices that belong to Crescent City clarinet stars of the early 20th Century.  Listening to their stories, one gets a fascinating and compelling picture of life in the early 20th Century. Meanwhile, the music is respectful, bluesy, playing underneath as a celebration of these musicians.  As the voices fade, the ensemble steps forward with the melody played by various sections.  Near the end, there's lovely soprano saxophone playing from Reagan Mitchell.

"Comité des Cityoens" is named for the New Orleans citizens activist group whose member Homer Plessy was arrested in 1892 for entering the "white-only" passenger car and refusing to move. His case was appealed to the US Supreme Court (Plessy v. Ferguson) which decided against Plessy therefore upholding the Jim Crow laws that kept African Americans "second-class citizens" until the 1960s. Plessy's actions set the stage for the protest tactics of the Civil Rights Movement. One might expect that the music Asher created for this section would be just as somber as previous cuts; instead, the music skips forward on short blasts of reeds over a raucous drum beat.  The instrumental section of the track features a powerful statement from tenor saxophonist Ricardo Pascal followed a dazzling spin over the piano from Oscar Rossignoli.  The song closes with more quotes from the Supreme Court's decision reminding  modern listeners that there is still more work to do.

The album closes with "Elegy" and "After This, That", musical meditations on the present day with melodies and rhythms that have organically grown from the roots of the musical forefathers and mothers.  The leader creates a long and passionate clarinet solo on the final track while the rhythm section kicks up a storm. Mitchell (soprano sax) and Ms. Nealand (alto sax) also make powerful statements while Singleton plays counterpoint (he also takes a wonderful arco bass solo) and Thibodeaux dances around his drum kit.

"Byron Asher's Skrontch Music" was issued in late October 2019;  it's musical and emotional impact will last for years.  Byron Asher did his homework and created this suite of music that encompasses the width and breadth of both the history and music of New Orleans (from the Jazz Age forward).  Listen closely – there's much to be learned from all the voices that will move into your ears and your consciousness.

For more information, go to byronasher.com.

Here's a taste of this fine music:

Nutria, the trio named for a Louisiana swamp rat that Asher formed with bassist Tim Boudreaux and drummer Shawn Myers in 2014, issues its third recording on Valentine's Day 2020.  Titled "Meeting In Progress" (ears&eyes Records), the recording, made in the waning days of December 2018, presents a portrait of a group that is comfortable pushing each other forward, making music with an impressive dynamic range, a clean sound, and inviting the listener to enter into a sonic adventure that eschews labels and styles. 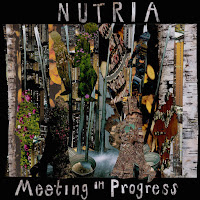 Each musician contributes, at least, two original compositions – still there is a unity in sound throughout the program. Asher contributed four pieces to the eight-song program including the title song that serves as the opening track. One can really hear the Air influence here especially in how the composer changes the melody and the rhythms throughout the piece. Asher's buzzing bass clarinet introduces "Once Annual Elegy" – his quiet solo is underscored by strong bass counterpoint and fine cymbal colors. The leader's other two contributions both bear names familiar to residents of Northern New England.  The sublime ballad "Tremont ME" finds Asher on clarinet and Myers's brushes setting the pace while "Monadnock" (a mountain in New Hampshire bears that name) is a ballad for tenor saxophone yet notice how all three share the melody line.  This is contemplative music that makes one listen closer.

Myers's drum work reminds this listener of New Orleans native Ed Blackwell as well as Chicago, IL, native Steve McCall (perhaps best known for his work with Trio Air). He also composed  the exciting "Forth" which rumbles forward on impressive drum beats, throbbing bass, and the composer's .  Myers is also responsible for the final track. "Lake Solitude" has a slow walking bass line, a melody line that contains echoes of Australian alto saxophonist Bernie McGann. Pay attention to the conversational drums and how Asher's tenor sax solo has such a "cool" feeling.  Boudreaux's "The Mission" also alludes to Air, displaying a Henry Theadgill influence, especially in the quirky yet emotional melody. The bassist's solo is also fascinating, especially for its melodic lines and how Myers chooses to move beneath them.

"Meeting In Progress" is the work of three friends, musicians who listen and respond to each other without making a big deal about being technically impressive.  No one voice is more important than any other – the trio's objective is to weave their life experiences into this music and see how it resonates with the listener. Nutria, the animal, lives on riverbanks, often congregates in large colonies, is mostly a herbivore, and can be dangerous to local landscapes. Nutria, the New Orleans-based trio, creates a musical environment hospitable to those willing to take the time to test the waters and then dive in!

For more information, go to www.nutriamusic.com.