Ross Hammond, guitarist, composer, entrepreneur, and family man, is based in Sacramento, CA. Much of what you really need to know about as a musician can be found by looking at his discography. He's recorded a slew of solo acoustic tracks, a good number of duo experiments, and earlier in the 2010s, several quartet and quintet albums.  Hammond has recorded in coffeehouses, concert venues, studios, and on his front porch. Over the past few years, he's been switching between acoustic and steel-bodied guitars, creating music that obliterates borders in the manner of the late John Fahey and the very-present Duck Baker. 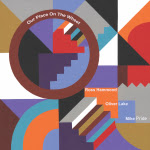 His latest sonic adventure, "Our Place On The Wheel" (self-released), finds him in the studio with Oliver Lake (alto saxophone) and Mike Pride (drums, percussion) – the program uses the acoustic blues of people like John Lee Hooker, Charlie Patton, Fred McDowell, and others as the stepping-off point for a series of improvisations. They hit the "record" button and 90 minutes later, an album was created.  One might ask "how does this music sound so good when it was just a spontaneous concert"?  Hammond had worked with both but never recorded together.  Yet, his decision to place his love of the blues forms in this setting with these "big-eared" listeners, interpreters, and creators, is deeply impressive.

Press "play", sit back, and listen. Absorb the sounds. Don't worry about song titles or length of the performances, just pay attention. Find your favorites, listen again, listen to how the musicians interact, to how the ageless (77) Mr. Lake plus with verve, fire, and imagination, to how Pride not only pushes his friends but creates a powerful flow beneath them; he swings, pounds, whispers, and creates cushions of sound.  Notice how Hammond not only creates a drone but weaves his way in and around the saxophone, responding to the power of the drums plus the language Mr. Lake creates.  His slide work evokes artists such as Skip James, Ry Cooder, Muddy Waters, and more, without imitating any of them.

In these days of deceit, disease, and unease, lose yourself in the musical landscape of "Our Place On The Wheel" – this music reminds one how friendship and trust, listening and responding, as well as the deep emotions conjured up by the artists who serve as signposts for this adventure, can create magic.  Listen to the title track below and see if you agree.

For more information, go to www.rosshammond.com. Also, you can listen and purchase his music by going to rosshammond.bandcamp.com.

Here is the title cut: 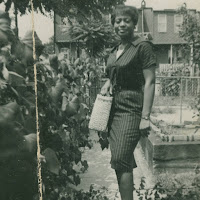 "Suite for Max Brown" is the first release through the partnership of International Anthem and Nonesuch Records. It's a delightful collection of solo pieces, collaborations, vocals, and instrumentals. There are through-composed pieces, studio "jams", and the  smashing take on John Coltrane's "After The Rain".  That last piece, featuring Paul Bryan (electric bass), Josh Johnson (electric piano), and Jamire Williams (drums), captures the dream-like atmosphere of the original, retaining the emotional power as well. The album opens with "Build a Nest", a funky duo with vocalist Ruby Parker (who is the guitarist's daughter) – the senior Parker builds a background with piano, drums, guitar, backing vocals, and a drum machine yet the simplicity of piece is striking.

This program changes directions on every track.  There's the fiery, Tortoise-like funk of "Fusion Swirl" (another tune with Parker on all instruments), the 70s funk of "Gnarciss" featuring the trumpet of Rob Mazurek and the drumming of Makaya McCraven, and the fiery Brazilian-style fusion of "Go Away" with bassist Bryan, drummer McCraven, and the leader on guitars, sampler, and the occasional shouted song title.  There are several other duos, two with Bryan, the afore-mentioned opening cut, and the slow drag of "3 For L" featuring drummer Jay Bellerose.  That piece features a long and melodic guitar solo, a quiet yet effective synth bass line, a complimentary percussion from the studio vet Bellerose (who has worked closely with singer-songwriter-producer Joe Henry).

The album closes with the title track which, at 10:38, is the longest piece.  The song opens with the guitars and synths; soon, alto saxophonist Josh Johnson and trumpeter Nate Walcott take over the melody. Williams's drums enter during Johnson's fine solo. There's a trumpet solo followed by a short guitar interlude and then Johnson takes turns with Walcott in the solo space. Over 2/3rds of the way through, the piece moves into another section with the beat now modified under the guitar and synth. This section acts as a coda; the music takes on a trance-like feel and no one instrumental voice standing out, confining until the fade. Check out the video below and see how the music underscores the images.

"Suite for Max Brown" finds Jeff Parker continuing his creative search, changing the way he puts an album together, paying closer attention to detail and groove.  His solos, as well as those by the various participants, move organically out of the mix, none overstaying their welcome or concerned with technical fanciness.  This "Suite..." feels like a series of short (with a few notable exceptions) "sound poems" – open your ears let the music in.

For more information, go to intlanthem.bandcamp.com/album/suite-for-max-brown where you can listen and purchase the album.

Here's Jeff Parker in the studio: