Hope In These Often-Crazy Times! 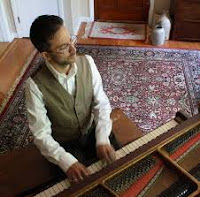 There are artists who use their music as a platform for their politics, for their emotions, for their hedonistic tendencies, and more.  Then there are artists who use their music to heal, to soothe, to fire imaginations with all the possibilities of what good can come out of interaction and working together.  Noah Baerman, pianist, composer, educator, author, ad the founder of Resonant Motion, is one person whose actions speak louder than words, whose music goes to the core of his humanity, and who never fails to impress old cynics (such as the author) with his ability to move forward, even in times of personal, physical, and political times of crisis. The music he creates challenges his listeners to be better people, to understand that life, like creative endeavors, is always moving forwards on the shoulders of those who came before us. 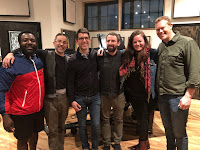 His latest recorded project for Resonant Motion Records is the six-person Envisage Collective. In existence since 2012, the sextet now features Baerman (piano), Kris Allen (alto saxophone), Chris Dingman (vibraphone), Nadje Noordhuis (trumpet), Ike Sturm (bass), and Allan Mednard (drums).  The ensemble's debut album features eight original pieces (two each from Baerman, Dingman, and Allen plus one each from Sturm and Ms. Noordhuis) – while the drummer does not have a composer credit, his playing is often the spark plug for this music, most of which jumps out of the speakers with joy and robust forward motion. Listen to his support of the vibraphone solo on Baerman's "The Omnivore's Dilemma" to get a better understanding of Mednard's importance to this band's sound. Click on the track below, the album opener, to hear how his "snap and pop" makes the music dance. 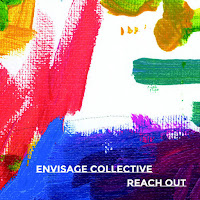 It's a delight throughout the program to hear how the lead voices mix and mingle, how they step back for solos, how the melodies expand into solos and return.  Allen's "Habitat" moves from the opening melody into a lively three-way dialogue with his alto plus bass and drums.  Dingman rides in on on the last note of the alto solo to create his own dance – here, Sturm and Mednard use Baerman's full chordal support to step out before the lively piano solo joins in.  All that in the first four minutes of the song before the sax and trumpet reenter to restate the song's theme.  One of the prettiest pieces on the album is Dingman's "Wish". a medium tempo ballad, that has quiet but powerful contributions from the "front line" while the rhythm section keeps a steady, martial, rhythm.  The weaving lines of vibes, piano, sax, and trumpet build with intention to a unison melody before everyone drops out for the bass and drums; then, the swirling melody of the vibes leads the unison line back in. It's easy lose one's self in the hypnotic lines and, as time drops away, be transported into a musical "new" world.  The "soulful" closing minute of the piece leaves one satisfied but wanting more.  That "more" comes in the form of Baerman's bluesy piano intro to his piece "Step On A Crack" - the "Memphis" tinge gives way to a bopping rhythm with a melody sung by trumpet and alto sax while Baerman responds at the end of each phrase with a riff of his own.

"Reach Out" does exactly what the title says it will – this music, created by six friends who have created a collective voice,  "reaches out" to every listener and asks you to open your mind and your heart to the possibilities of good all around us. Can music change the world?  Noah Baerman, Resonant Motion, and the Envisage Collective believe so; this album just might convince you as well!

For more information, go to resonantmotion.org/artists/envisage/.

The music that Brian Charette can caress out of his keyboards is always a joy to dig into.  Whether he is playing organ with his Sextette or piano in a trio or delving into electronics (as he does with his Kürrent trio), he does so with a sense of exploration, respect, and a playfulness that keeps the listeners on their toes or sitting back with a satisfied smile.  He can be heard on numerous Posi-tone Records disks (as both a leader and sideman) plus on numerous albums for the Danish SteepleChase label. 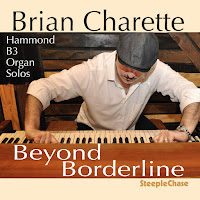 His latest sonic adventure is a solo Hammond organ album "Beyond Borderline" (SteepleChase), a follow-up to 2013's "Borderline" for the same label.  Like the previous recording, the program is a mix of standards and originals but no "pop" songs like on the earlier endeavor.  That's fine – Charette's explorations of "classics" such as "Chelsea Bridge" and "Prelude to a Kiss" not only show his respect for the masters (in this instance Billy Strayhorn and Duke Ellington) are delightful.  On the latter tune, one can imagine him playing the song in between innings at a Yankees game as much as in the wee hours of the morning in a basement club.  Charette's bass lines (a combination of feet and left hand) really keep the music on an even keel.

Not surprising that the 12 tracks are all "first takes" – Charette's creativity comes to the fore every time. There is a tinge of Larry Young's exciting style on the album opener "Yolk."  The rhythm line he creates is persistent and insistent while the melody on top of that jumps forward.  Listen as he dances through "Public Transportation" like a subway train careering through the underground.  Another original "Hungarian Bolero" creates a sensual sound world with melodic phrases that curl around the rhythm. At seven minutes, it's the longest track on the program but you'll like how it continues to move forward.  "Aligned Arpeggio" is a soulful delight, the whispery bass lines supporting a sweet melody line and the powerful solo that follows. The piece picks up in intensity as the bass lines become more forceful allowing Charette to move out and in with an ear towards both timbre and emotional strength.

Put on "Beyond Borderline" first thing in the morning and the music will ease you into the day. Listen to this music during a leisurely dinner and it will add spice to the conversation.  End the day with the sweet burbling tones of the Hammond B-3 echoing in your ears and mind; the sounds just might make your dreams a bit sweeter.  Brian Charette continues to impress with his musicianship, his boundless energy, his creativity, and his sheer joy for music.  Make the effort to find this album and you'll be rewarded each time you listen!

For more information, go to www.briancharette.com.  The album is available at Charette's website plus iTunes and Amazon.com as well – the latter two are good places to go for sound clips.