Moving Into a New Year While Playing Catch-Up (Pt 1)

Life has a way of throwing big curveballs into one's best-made plans.  Started out 2019 in the local hospital and am ending the year trying to catch up with all the fine music that came my way in the past 11 months.  What's got me far behind my projected writing was the end of a busy semester and then the joyous onslaught of grandchildren into our quiet domicile. Calendar aside, here are two 2019 recordings that deserve your attention.

Earlier this year, I had the opportunity to interview bass clarinetist Todd Marcus (pictured left) and then hear him in concert at our local library (playing alongside his long-time associate Eric Kennedy (drums), pianist Noah Baerman, and bassist Henry Lugo. Marcus lives in Baltimore and works hard to make his adopted hometown a better place for all.  He does not do this all through music (although that's a good part of it) but also through the various non-profits he works with.  Marcus is straight-forward, pulls no punches, is filled with empathy at how his city has been maligned by politicians and people around the country but also sees how hard his neighbors work to keep their part of Baltimore (the Sandtown-Winchester/Upton communities) clean and livable. 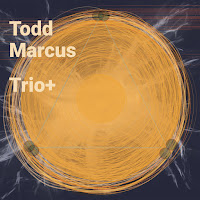 While Marcus's 2018 album "On These Streets (a Baltimore Story)"  dealt with the issues of his city, late this past Summer the clarinetist issued "Trio+" (Stricker Street Records). Nine of the 12 tracks feature the rhythm section of Ralph Peterson (drums) and Ameen Saleem (bass on seven of those cuts replaced by Jeff Reed for one who also appears on five others). The album opens with the 14-minute, four-movement, "Something Suite"; inspired by Sonny Rollins classic "Freedom Suite", the music rises and falls on the powerful work of Peterson and Saleem while the leader creates a strong thematic message.  With the exception of one track, Marcus plays bass clarinet throughout the program. He's found his "voice"on the instrument as he moves, often glides, through the octaves.  Note the "sweetness" of his melody and tone on the "3rd Movement" – the lower tones resonate while the higher ones have a singing quality.

The "+" on four of the tracks is trumpeter Sean Jones.  He and Marcus danced and dive their way through "Amy Pookie" with Peterson pushing them hard during the solos sections.  The front line caresses the melody on Victor Young's "My Foolish Heart", a ballad that features fine counterpoint from Reed, excellent brushes work from Peterson, and lovely solos.

Reed and Marcus blend their voices (the bassist playing arco most of the way) on "How Deep Is The Ocean (intro)" before drummer Eric Kennedy enters to push the song forward.  Again, the bass counterpoint stands out throughout the track.  The clarinetist, Peterson, and the two bassists dance their way through a short but powerful take on Bennie Maupin's "Neophilia."  The piece really builds off the "bounce" that Reed and Saleem supply as well as Peterson's majestic drum work.

"Trio+" closes with "Plummeting", an original piece that Marcus first recorded on his 2005 debut for Hipnotic Records "In Pursuit of the Ninth Man" –  that album featured Marcus's Jazz Orchestra while here it's played as a quartet with Jones as the other voice.  The power of the playing hearkens right back to the opening track with Ralph Peterson leading the way with his energetic and joyous playing.

The more one listens to "Trio+", the more one wants to see this band in person.  They possess the power to pick the listener right out of his/her seat as well as make them lean in to really "hear" the softer pieces.  Todd Marcus continues to tell important stories in his music, this time making musical testaments on the importance of working together as a unit while still maintaining one's unique voice.   Dig in and play it loud!!

Pianist and composer Greg Reitan, a native of Seattle, WA, who has been in living in Los Angles, CA, for nearly three decades, has recorded exclusively for Sunnyside Records since his late 2008 debut "Some Other Time."  Each of his albums features the rhythm section of bassist Jack Daro and drummer Dean Koba who have been his steady musical partners for 25 years.  There is nothing stale or dull about this relationship – in fact, the music breathes with creativity and honesty.  Reitan is also busy with composing for film and television as well as for advertising plus has  composed several classical works. 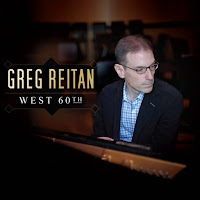 "West 60th" is his fifth album and does not stray from the pattern set by the previous four other than there are more originals among the 11 tracks than usual (eight plus one each from Bobby Hutcherson, Herbie Hancock, and Aaron Copland).  But, it's five years since Reitan issued his previous album "Post No Bills" and, perhaps it's that fact that accounts for the urgency in many of the pieces.  The program opens with "Hindemith", a piece that jumps out of the speakers. Reitan dances over the rapid-fire "walking" bass lines and insistent cymbal work.  The breakneck pace does not let up even as Koba jumps into his solo.  The title track is next, a handsome waltz inspired by the Trio's 2017 "playdate" at Dizzy's Club Coca-Cola in NYC's Lincoln Center.  The bluesy swing from the leader builds upon the energy produced by his partners.

The pace slows down with a lovely take on "When You Are Near", a Bobby Hutcherson piece from his 1967 Blue Note Lp "Happenings."  The melody, as played by Reitan, has a classical feel – Daro's "singing" bass work is also a highlight both when he's playoff counterpoint plus during his solo.  The Aaron Copland composition is "Movement No. Three" from "Four Piano Blues."  Performed solo, one cannot help to hear the influence the older composer had on the work of Randy Newman.  To his credit, Reitan does not take liberties with the music allowing the plaintive melody to stand out.  If one goes back two tracks on the disc, the pianist's ballad "Luminosity" has a touch of the Copland influence in the chordal structure.

The best way to listen to "West 60th" is to start at the beginning and go right through to the melodious "Epilogue".  The music, at times exciting, always melodic, contemplative, and filled with intelligent musicianship, demands and deserves your attention.  Others have compared Greg Reitan and his music to that of Bill Evans and Keith Jarrett; there are hints on several tracks but what one always hears on this album is creative songs, excellent arrangements, intelligent interactions, and a trio that loves to play together.  Works for this listener.

For more information, go to www.gregreitan.com.