In the 1970s, Wadada Leo Smith wrote music and books while devising a theory of composition and performance that is, to this day, the backbone of the music he creates and champions. Over the past 50 years, he has played alongside members of the AACM, he has traveled the world, celebrated the lives and works of Miles Davis, Rosa Parks, the National/Natural Parks of the United States, reminding listeners of the racism that he first saw in his native Mississippi that still permeates our country, and doing so with his music and the clarion-call of his trumpet.

This coming weekend, Wadada Leo Smith returns to Firehouse 12, 45 Crown Street in New Haven, CT, to present the Third Annual CREATE Festival , a gathering that will delve deeply into his multi-faceted and unclassifiable music featuring brilliant works for a diverse roster of musicians and ensembles. Taking place Saturday, April 6 and Sunday, April 7, 2019, the festival will include performances by four of Wadada’s own wide-ranging groups as well as unique collaborations and solo performances, alongside an exhibit of Smith’s Ankhrasmation Symbolic Language Art-Scores.  Performances take place at 7 p.m. Saturday and Sunday; a lunch dialogue with Wadada and Professor Nina Sun Eidsheim will take place on Sunday at 1 p.m.

The third incarnation opens with a quartet led by guitarist Lamar Smith (the trumpeter's grandson) featuring electronic artist Hardedge, bassist Melvin Gibbs and drummer Pheeroan akLaff.  Saturday’s program continues with "The First Light Gold / The Second Light Blue", a piece from "Rosa Parks: Pure Love" performed by solo violinist Mona Tian. From Smith’s latest work to one of his earliest, the composer will take the stage with his quartet NDA to reprise the music from 1979’s "Divine Love", in honor of the 50th anniversary of the ECM record label, which released the album. The quartet will feature vibraphonist Bobby Naughton and multi-reedist Dwight Andrews, both of whom played on the original recording, with longtime collaborator John Lindberg standing in for the late bassist Charlie Haden.The opening evening will conclude with a summit meeting between two explosive trios: Smith’s Najwa, which teams Wadada with Lamar Smith as well as bass icon Bill Laswell, and Harriet Tubman, (pictured above) the audacious avant-funk-jazz-rock trio of bassist Melvin Gibbs, guitarist Brandon Ross, and drummer JT Lewis. The double trio will premiere two pieces from a new suite exploring the concepts of quantum physics and parallel universes, with music transitioning between multiple ensembles as if shifting between alternate dimensions. 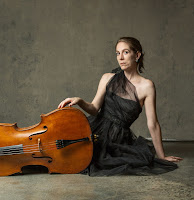 Sunday’s line-up begins with "Sweet Bay Magnolia with Berry Clusters", a striking piece Smith composed for the virtuosic cellist Ashley Walters (pictured left), which she’ll perform in a duo with the Japanese Butoh dancer Oguri. The dancer will then be joined by Wadada and pipa master/vocalist Min Xiao-Fen to essay Smith’s "Lake Biwa; A Full Moon Pure Water Gold", a reimagined version of the title track from Smith’s 2004 release for John Zorn’s Tzadik label.

The weekend will culminate with a performance by Smith’s long-running Golden Quintet (pictured below), in which the trumpeter is joined by pianist Erika Dohi, cellist Walters, bassist Lindberg, and drummer  akLaff. They'll perform two compositions inspired by iconic figures related to the Civil Rights movement, both composed but not recorded for an upcoming ECM recording that reflects on the idea of tolerance through iconic figures and moments in political, social and musical history. With "JFK in Dallas: Parkland: 11.22.1963", Smith reflects on the assassination of President Kennedy, while "Miriam Makeba: A Magnificent Voice: The Empress of Peace: 1932-2008" celebrates the life of the revered South African singer and activist known as “Mama Africa.”

Take a look at the full schedule - this is yet another impressive two days of music.

"Spirituals: The Language of Love"

Lunch, Coffee and Tea with Wadada Leo Smith and Artists

"JFK in Dallas: Parkland: 11.22.1963"
"Mariam Makeba: A Magnificent Voice: The Empress of Peace: 1932-2008"
CREATE Festival is made possible with generous support from the Doris Duke Foundation in partnership with Creative Capital. Smith received a Doris Duke Artist Award in 2016.
Here are several examples of Wadada Leo Smith's music:
This is from Smith's 2017 release "Najwa" (TUM Records)