Many say that all music is political but some is both political and personal.  The Art Ensemble of Chicago started as the Roscoe Mitchell Art Ensemble in Chicago, an offshoot of the work the saxophonist and composer was doing with the AACM (the Association for the Advancement of Creative Musicians).  Mitchell first recorded with future AEC members trumpeter Lester Bowie,  and bassist Malachi Favors Maghostut for Delmark Records in 1966 - the album, "Sound", also featured saxophonist Maurice McIntyre, trombonist and cellist Lester Lashley, and percussionist Alvin Fielder.  Saxophonist Joseph Jarman, who had first met Mitchell in 1961, played with him in Muhal Richard Abrams Experimental Band and recorded with Bowie, Favors Maghostut, and Mitchell on the trumpeter's 1967 Nessa release "Numbers 1 & 2" and at the same time, with Mitchell's Art Ensemble on the group's "Congliptious" (Nessa) Lp.

In 1969, Jarman was invited to join the quartet and the group became the Art Ensemble of Chicago - they then moved to Paris, France, where the AEC played numerous and began working for several different labels. They built a cult following but soon felt the urge to come back home in 1971. Over the next eight years, the quintet toured throughout the United States, recording albums for Atlantic Records, Delmark, and started their own label, AECO Records, in 1975.

In 1978, the AEC signed with ECM Records which helped to bring the ensemble a worldwide audience. "Nice Guys" (the cover photo is on the left) showed them at their "experimental" best, going "free shouting matches to swing to blues to whatever they felt would get their message across.  That message - "Great Black Music - From the Ancient to the Future" - is the best way to describe the sounds the five musicians created.

The best way to understand this music was to see and hear the AEC in person. The experience was always more than just five guys playing music. Instead, the stage was often packed with instruments, from small wooden flutes to bass saxophones, from bells to tympani drums to a full drum set.  Several members of the band would paint there faces and wear bright African clothing while Bowie often appeared in the white jacket of a doctor. And, as is often the case with improvised music, the quality varied from show to show, set to set.  I saw them at the Public Theater in New York City headlining a double-bill with pianist Don Pullen. Both acts were astounding. The Art Ensemble played for 75 minutes without a break: it felt like 15 minutes.  Not surprisingly, at least 1/3rds of the group's albums were recorded in person. 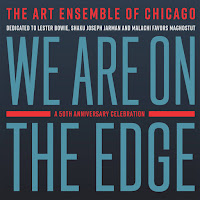 Time marches on. Lester Bowie died in 1999, Malachi Favors Maghostut passed in 2004, and Joseph Jarman earlier this year. Famadou Don Moye now lives in Marseilles, France, and Roscoe Mitchell recently retired after serving 12 years on the Music Faculty of Mills College in Oakland, California.  When the Art Ensemble recorded its new Pi Recordings "We Are On The Edge: A 50th Anniversary Celebration" in October of 2018, Mr. Jarman did not join original members Messrs. Mitchell and Moye: instead, the 2-CD set, one recorded in the studio, the other at Edgefest in Ann Arbor, Michigan, features the talents of 18 musicians.  Among those musicians are Tomeka Reid (cello), Nicole Mitchell (no relation - plays flutes), and trumpeters Hugh Ragin and Fred Berry.  Besides Mr. Moye, there are three other percussionists, a poet (Camae Ayewa aka Moor Mother), opera singer Rodolfo Cordova-Lebron, three bassists (Silvia Bolognesi, Jaribu Shahid, and Junius Paul), and more. 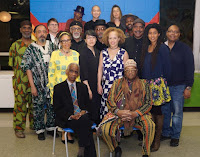 The studio sessions include music from Mr. Mitchell's opera "Bamboo Terrace", several percussion-based works, pieces with "slam" poetry, the use of various electronic instruments, plus a number of older works including a short version of Mr. Bowie's "Villa Tiamo" (from the ensemble's 1998 "Coming Home Jamaica" album).  Several pieces can be heard on the live disk, recorded the same evening (10/20/18) as the final studio session.  One hears classical music, long "jams", passages of incredible musicianship, swing, hard-bop, funk, Afro-funk solos, duos, trios, but no vocals.  Disk two contains a 19+ minute rendition of Favors Maghostut's "Tutankhamun" which the original members (minus Moye) of the AEC first recorded in France in 1969.  The percussion section includes Enoch Williamson who recorded with Famadou Don Moye in 1996 and, along with fellow percussionist Titos Sompa, create a five minute celebration titled "Saturday Morning" the pounding percussion sets quite a table for Mitchell's wailing sopranino sax.

50 years!! What an accomplishment for The Art Ensemble of Chicago, a group that never, ever, rested on its laurels but keeps on searching.  With the injection of younger members (Roscoe Mitchell is 78, Famadou Don Moye is 72) like Nicole Mitchell and Tomeka Reid, Junius Paul and Silvia Bolognesi, the experimentation and exploration is sure to continue for many more decades.  For today, "We Are On The Edge" is quite a fascinating program and well worth your time!

For more information, go to www.akamu.net/aeoc.htm.