Alto saxophonist and composer Román Filiú, born in Santiago de Cuba and now a resident of New York City, has created quite a busy career.  He performs and records with Henry Threadgill's Ensemble Double Up and with drummer Dafnis Prieto. He has also worked with fellow saxophonist David Murray, pianists Gonzalo Rubalcaba, Marta Sánchez, and Chucho Valdés plus drummer-composer Doug Hammond.  His first album as a leader , "Blowin' Reflections", was issued in 2006 on the Spanish Bost Espacio Creativo label while his second, "Musae", was issued in 2012 on Prieto's Dafnison Music imprint.  Both featured fiery playing as well as intelligent compositions that mined the composer's heritage while illustrating how he continually looks forward. 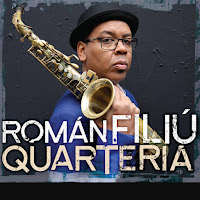 "Quarteria" (Sunnyside Records) literally translates to "house of residence" and "small housing units" - the title also refers to the place where Filiú grew up.  Joining him on this musical adventure is Ralph Alessi (trumpet), Dayna Stephens (tenor sax), David Virelles (piano), Matt Brewer (bass), Craig Weinrib (drums), and Yusnier Sanchez (percussion) plus Maria Grand (tenor sax on two tracks).  The musicianship is superb throughout as Filiú creates an extended suite that show the diversity of his influences (Cuban dance music, classical studies, Afro-Caribean music).  Note the clean tones of the front line, the articulate piano lines, the powerful bass, drums, and percussion but also pay attention to the extended melody lines, the harmonies, and the solos that grow organically from the composer's settings.

From the opening throbbing rhythms of "Fulcanelli", the listener enters into a musical world at once familiar yet challenging.  Listen to how the melody for the reeds and trumpet is constructed and how the opening solo (Filiú) dips and swerves around the Monkian piano chords and hopscotch rhythms. Virelles, who also hails from Santiago de Cuba, takes a most delightful turn before Stephens engages him in a fascinating musical conversation.  Weinrib, who plays alongside the leader in Ensemble Double Up (as does the pianist), leads the group into "Grass", at first playing a melodic line: then he continues to play around and through the phrases and interactions of the others.  "Choral" is a beautiful ballad with a haunting melody line filled with harmonic turns, Both saxophonists take handsome solos before Virelles's contemplative turn (listen to Brewer's excellent counterpoint during the piano spot).

Filiú composed three "Danzas" for the album.  "#5" comes first and is a short (1 minute) yet thoughtful piano solo that leads into "#1" , a piece that jumps out of the speakers led by the excellent percussion and drums.  The dancing rhythms rumble beneath the soloists, reacting to the dynamics of the players while spurring them forward.  Alessi builds his potent solo not only on the melody line but on the rhythms below him.  Separating "#1" from "#3" is the short but succinct "Glass", an uncomplicated melody line but a powerful piano spotlight. The final "Danza" begins with a fine bass solo before the tolling piano chords lead the rest of the group in.  Here, the trumpet solo darts forward ahead of the beat before Stephens comes in, echoing the percussion.  Virelles takes a fiery solo, weaving atonal chords with rushing single-note runs in a stunning fashion.

Saxophonist Maria Grand adds her tenor sound to "For Horns and Bells", a short yet lovely piece with a melody reminiscent of John Coltrane's "Central Park West"; in particular, the arrangement reflects the version Jack DeJohnette recorded with his Special Edition in 1980. She also can be heard on the following track, "Tursten", adding her attractive sound to the collective melody line before taking her solo, The rhythm section simmers below her as they do beneath Filiú - the pace picks up, a momentary montuno, right before the close.

"Quarteria" attracts the listener with its intelligent melodies, intricate harmonies, and captivating rhythms.  The sound of this music is so clear, never cluttered, with inventive solos and interactions.  Román Filiú, along with his excellent ensemble, has created an exciting program, music that resonates with one's feet, heart, and soul.

For more information, go to www.romanfiliumusic.com.

Take a listen to the opening track: 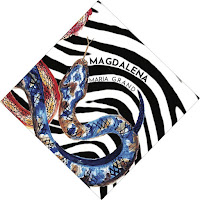 Maria Grand creates a unique program on her full-length debut recording. "Magdalena" (Biophilia Records) contains story-songs, instrumental excursions that feature the excellent rhythm section of Rashaan Carter (acoustic and electric bass) and Jeremy Dutton (drums), a pair of duets with guitarist Mary Halvorson, a duet with pianist (and label head) Fabian Almazan, and powerful contributions from pianist David Bryant. The tenor saxophonist wrote all the pieces (including the lyrics) on the album and contributes most of the vocals,

Ms. Grand, a native of Switzerland. moved to New York City in 2011 (at the age of 19) to study and work with Billy Harper, Doug Hammond, the late Von Freeman, and Steve Coleman.  She has recorded with Coleman on his most recent Pi recordings, "Synovial Joints" and "Morphogenesis."

The album opens with "La Immortal", a rubato work that features spoken-word artist Jasmine Wilson (a vocalist and poet) - the words celebrate the feminine aspect of creation while the saxophone, piano (Bryant), and rhythm section skitter beneath the voice. Almazan's piano rumbles, flows, and thunders below Ms. Grand's voice on "Imani/Walk On By", a tribute to vocalist Imani Uzuri. The two tracks with Ms. Halvorson, "Last Year" and "Sing Unborn", both deal with personal relations, although the latter tune is written to Ms. Grand's unborn children.  The blend of guitar and voice has a mysterious quality heightened by the tension in the melody line as well as the sustain and studio echo.

For this listener, it's the three-part, 19-minute "T" suite that stands out.  On "T 1: Isis", Ms. Grand winds her way through the melody while Carter's electric bass provides a thick counterpoint and Dutton pounds, rattles, and dances underneath.  "T II: Maria", according to the liner notes represents the "Virgin Birth" of Jesus to Mary and Joseph. After a powerful solo saxophone intro, the rhythm section enters, Carter on acoustic bass and Dutton setting a medium pace Ms, Grand to move seamlessly over.  There are moments on this recording, this being one of them, when you can hear the influence of Steve Coleman and Greg Osby, especially n the way the bass and drums frame the saxophone as well as the adventurous melody lines in the solo. "T III: Magdalena" floats in on acoustic bass and splashing cymbals supporting a formal, Indian-influenced, melody.  The piece opens to a wide-ranging bass solo and when the drugs and saxophone return, the mood returns to the contemplative state of the first part of the track.  However, Dutton is more active, more intense, as a counterpoint to the rolling saxophone lines.  That tension is quite effective and is broken right at the end by a short, bouncy, melody that closes the piece.

Bryant's roiling piano work stands out five tracks on which he joins the band but especially on the trio of pieces that are back-to-back-to-back. "Pyramid Sphere" opens in a funky mood and the pianist immediately launches into a solo. Built off the melodic phrases that open the track, Bryant engages in a a lively give-and-take with the bass and drums. Ms. Grand picks up on that energy, entering into her solo in a playful mood.  A strident piano chord introduces the next track, "Where Is E", and one expects by the saxophone-piano duo, the piece will be a ballad. The pace is slow, with a blues feel, yet moves in unexpected directions (note the excellent bass work).  The final song of the three, "Demonium", has a funky feel, a cross of The Meters with Steve Coleman. Dutton is the focal point here, creating a tension-filled skittish rhythm that influences how Ms. Grand and Bryant respond.

The album closes with the other spoken-word piece, "Ejes y Deseos", which features rapper Amani Fela. With an airy background, a powerful bass line, and several melodic interchanges between the saxophone and piano, the song is a positive close to a program. Among the lines are the opening couplet "May all the creation the children of love/feel the burn of happiness" and the closing couplet "Infinite connection through the hearts/Real life energy shared in the minds of thousands."  There are moments when Ms. Grand's lyrics sound precious but the music beneath the voice has power and a strength that gives the words more depth.

"Magdalena" is a fascinating recording, very different from one might expect of someone so young. Her teachers and mentors obviously heard elements in the music created by Maria Grand to allow her to take flight.  Her voices, singing and saxophone, are already beginning to move away from her mentors: it should be fascinating to hear and see how this artist changes as she grows.

For more information, go to www.mariakimgrand.com.

Here is one of the Trio tracks: