As I write this, the temperature in central CT is plummeting towards 0 degrees and the wind is rattling the windows. But the music contained on the 2 CDs below is filled with warmth, creativity, joyous interactions, and humanity.

Camilla Meza came to the United States in 2009 from her native Chile in 2009 and, since then, has slowly but steadily become a force to reckon with.  Originally a guitarist, she discovered the joy of Wes Montgomery and Pat Metheny, studying throughout her teens and pushed by a mentor to begin using her voice as well. Over the past few years, she has worked and recorded with vocalist Sachal Vasandani, pianist Fabian Almazan (she's part of his impressive "Rhizome" project, and trombonist Ryan Keberle's Catharsis quintet (see below). She's also collaborating with Israeli bassist and composer Noam Weisenberg in The Nectar Orchestra.

With 2 albums released in Chile (only 2009's "Retrato" has been issued in the US), Ms. Meza recorded her previous CD in 2013 with pianist Aaron Goldberg, drummer Clarence Penn, reed player John Ellis, and bassist Pablo Menares.  The 6-song "Prisma" (self-released) illustrated her growth not only as a guitarist and vocalist but also as an arranger. Her assured vocals and vocal lines stand out, placing alongside contemporaries Kate McGarry, Kavita Shah, Gretchen Parlato and Becca Stevens as brilliant interpreters.

Her new album, "Traces" (Sunnyside Records), features Ms. Meza with a stellar band - Shai Maestro (keyboards), Matt Penman (bass), Kendrick Scott (drums) and Bashiri Johnson (percussion) - playing a brilliant program of originals and smartly chosen interpretations. In charge all the way (Ms. Meza co-produced the recording with Matt Pierson), this music wraps its arms around the listener, pulling him/her closer - it's not that all the music is bright and sunny but many different aspects of adult life are open for inspection.  Mr. Vasandani and cellist Jody Redhage join the group on the original "Away", a song about relationship in trouble.  You hear the emotional darkness in the cello lines but the voices are calm (beautiful harmonies).  Once you've absorbed the lyrics, vocals, handsome acoustic guitar and brooding cello, listen to the brilliance of the rhythm section, to Penman's solid bass lines and Scott's gentle but sturdy brush work. The percussive push of the guitar on "Amazon Farewell" (from the pen of Djavan) sets the tone for propulsive snare drum.  The message is just as important bow as when the original appeared in 1990, the destruction of the natural environment for the advantage of outsiders.  Ms. Meza also pays tribute to a slain Chilean activist, singer-songwriter Victor Jara, who was brutally slain during the coup of General Pinochet, with a lovely voice and acoustic guitar reading of "Luchín", a story of poor boy playing in the rain. And her interpretation of Stephen Sondheim's "Greenfinch and Linnet Bird" (from "Sweeney Todd: The Demon Barber of Fleet Street") flows atop the impressionistic piano of Maestro and propulsive work of the rhythm section.  One can hear the essence of freedom in how the vocal and guitar lines flow freely through the song. Ms. Meza has such a pliable voice; she never rushes a vocal and also has learned how to integrate her guitar so that the two are extensions of each other. Listen as she dances through "Emerald", her rapid-fire guitar riffs complement the sustained notes and emotion in the vocal.

Chances are good you will not hear a better CD this year.  "Traces" is, blessedly, adult music with being middle-of-the-road, music that lingers in the mind's ear long after the final notes fade.  Camila Meza, songs, voice, and guitar, the entire package, all will bring a smile.  Highly recommended! 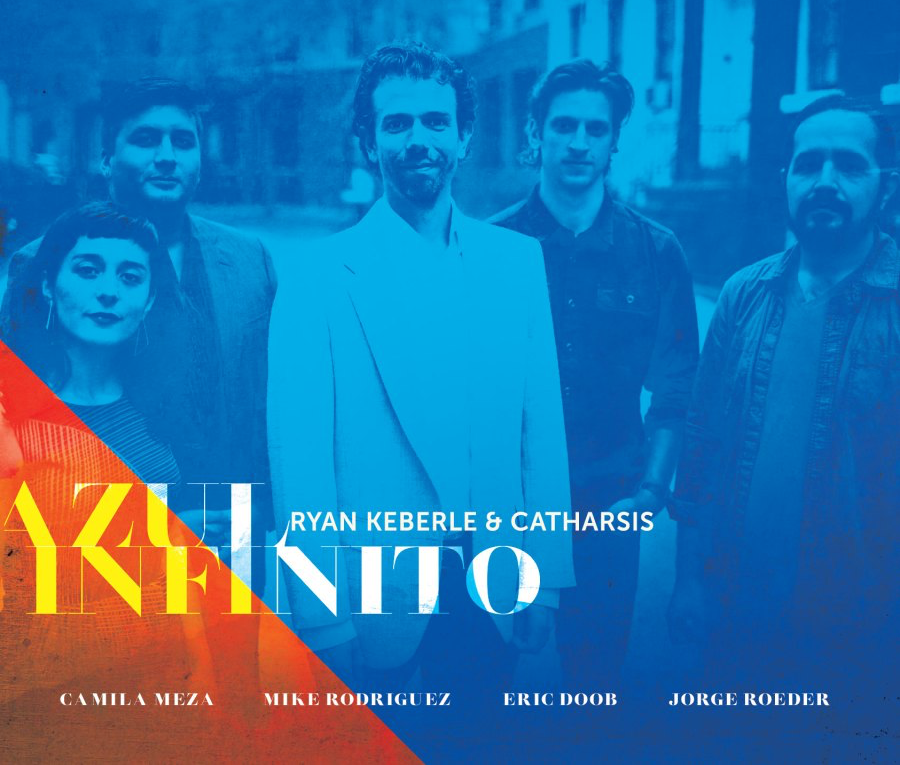 One of the other projects Camila Meza is involved with is Ryan Keberle & Catharsis.  She joined the trombonist/composer's band for their previous album, 2014's "Into The Zone" (Greenleaf Music). Her voice is front and center on the band's new Greenleaf CD "Azul Infinito", an equal alongside Keberle, Mike Rodriguez (trumpet, pandeiro), Jorge Roeder (electric and acoustic basses), and Eric Doob (drums) - the program is a tribute to the South American music community in New York City that welcomed Keberle into its bands when he first moved from the Pacific Northwest.


People such as vocalist/songwriter Sebastian Cruz, bassist Pedro Giraudo, percussionist Samuel Torres, pianist Emilio Solla, and vocalist Ivan Lins have tracks dedicated to them on the album.  The program opens with voice, then one-by-one, the other musicians enter and the melody is played by Roeder on electric bass. By the middle of "I Thought I Knew" (for Pedro Giraudo), one does even notice that there are no chordal instruments. But listen to how the rhythm section fills the sound spectrum, how the interwoven lines of trombone and trumpet really drive the music, and how Ms. Meza not only sings the lyrics but serves as another instrument. The lovely ballad "She Sleeps Alone" (for Sebastian Cruz) sounds like a ballad from a 1940s romance or mystery film, the brass melodies having a film noir feel while Doob and Roeder move impressionistically underneath. The piece closes with Keberle on melodica (hand-held keyboard that one blows into to create an accordion-like sound) right after Ms. Meza's lovely vocal. Cruz's "Cancion Mandala" has an infectious rhythm, a lovely acoustic bass counterpoint, a heartfelt turn from the vocalist, and a rousing trumpet solo. 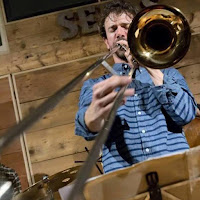 There are so many special moments throughout the album.  The influence of Kenny Wheeler can be heard in the free-wheeling (some pun intended) "Quintessence" (for Ivan Lins), especially in the fiery rhythmic drive and hardy brass solos.  "La Ley Primera" is a lovely ballad from the pen of bassist Giraudo that Keberle had songwriter Roxana Amed write the lyrics to.  Again, it's Roeder's electric bass leading the melodic way beneath the vocal as Rodriguez and Keberle weave lovely harmonies in the background. Both solo. limpid sounds that reflect the blues in the lyrics.  The bounce in the rhythm section and the splendid vocal on "Madalena" brings the album to a close on a playful note. Listen for the section with trombone, wordless vocal and the pandiero and one will hear the essence of dance in South American music.  When Doob and Roeder return, the music dances even more, an urgent reminder to shed our worries and, if only for the length of the song, live in the moment.

"Azul Infinito", the 3rd album by Ryan Keberle & Catharsis (among the trombonist's 5 CDs as a leader), may be its finest.  The musicians are comfortable with each other to push the boundaries and the addition of Camila Meza takes the music to great heights.  Everyone plays so well, the recording ring out the nuances and power in the rhythm section and Keberle's voicings for his trombone and Michael Rodriguez's trumpet are inventive, filling the sound spectrum with impressive harmonies and counter-melodies.  Ryan Keberle continues to mature as a composer, arranger and musician; the avid listener is the beneficiary.