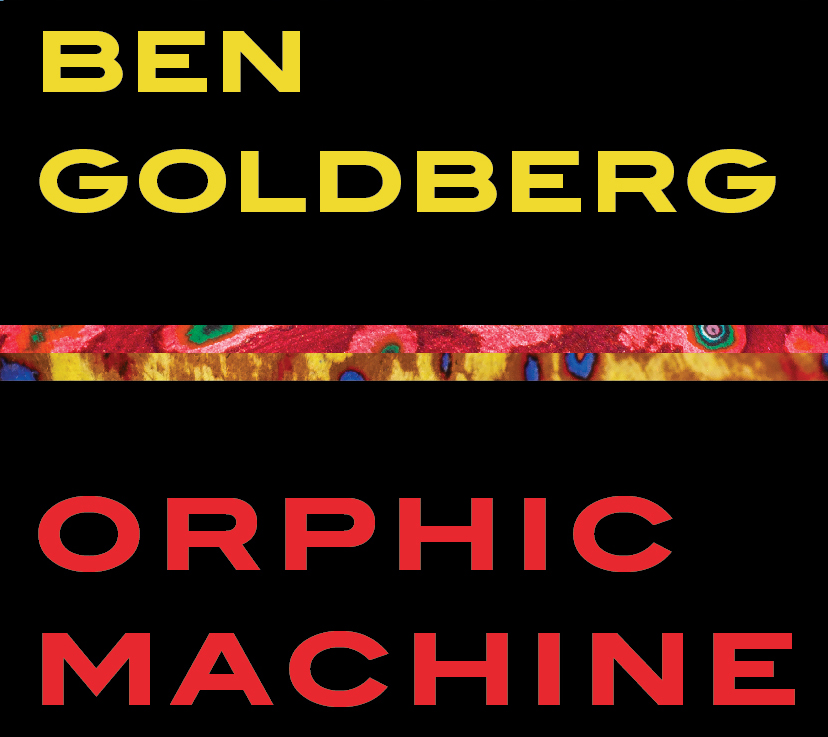 Over his career, now well into its 3rd decade, Ben Goldberg (clarinets) has created music has taken listeners many places, from the experimental side of klezmer to evocations of Steve Lacy. His work with Tin Hat has explored and expanded upon modern chamber music as well as the poetry of e.e. cummings. He has worked with guitarist Nels Cline exploring the music of Andrew Hill and is a member of Myra Melford's Be Bread.

All of his associations and influences are in evidence on "Orphic Machine" (BAG), a multi-layered program of original music built upon the words of the late poet Allen Grossman (1932-2014). The poet's "lyrics" do not come from a poem but from a treatise/reflection on poetry, "Summa Lyrica" from the 1991 book "The Sighted Singer." The project, commissioned by Chamber Music America/New Jazz Works, features a nonet composed of Goldberg's associates past and present  including Ms. Melford (piano), Mr. Cline, Carla Kihlstedt (violin, voice), Ron Miles (trumpet), Rob Sudduth (tenor saxophone), Kenny Wollesen (vibraphone, chimes, drums on "Bongoloid Lens"), Ches Smith (drums, vibraphone on "Bongoloid Lens"), and Greg Cohen (acoustic bass). The music has influences, ranging from The Beatles to Kurt Weill to the blues to swing to several sections that remind this listener of the music that Dick Connette created for his Last Forever projects.

What stands out from this program is how Goldberg utilizes the different voices at his disposal.  This music rarely sounds cluttered (although the final track, the title cut, does "roar" for the final few minutes), each voice stands out.  Ms. Kihlstedt has a soft voice and, rarely, if ever, is she lost in the mix.  Most of the time, the words set the tone of the music for the piece. "Care", for instance, and the repetition of the line "I find myself in the act of care" (an ear worm of the highest order) helps to open the music, leading the nonet to a great guitar solo that really kicks hard.

There are several strictly instrumental pieces including the "cool jazz"-inspired "What Was That", the short and sweet "How To Do Things With Tears" (great muted trumpet interaction with piano, clarinet and bass) and the Kansas City blues of "Bongoloid Lens" (sounds like a Frank Zappa title). These pieces do not act as after-thoughts or interludes but serve to illustrate the poet and the composer's approach to how they create.  Poetry and music can certainly be impressionistic but can also cut to the quick, exposing emotions in a visceral manner (think Allen Ginsberg's "Howl" or John Coltrane's "Birmingham"). Yes, there is a "cool" feel at times in the music found on "Orphic Machine" (check out the vibes solo on "Immortality" and the funky work beneath it by Cline, Cohen and Smith but then listen to how the band kicks into high gear as the clarinet wails and the guitar bellows) but the solos often are the fire that illuminate the heart of the artist's intent.

"Orphic Machine" is a lot to take in one sitting (nearly 76 minutes) yet if you approach it slowly (perhaps 2 or 3 cuts at a time), chances are good you'll fall under its spell. Time will allow for the words to take hold, helping you understand the intent of the poet as well as how the composer illustrates the vocal lines. Ben Goldberg has created a project that ranks among his best work, music that will resonate for years to come.

For more information, go to www.bengoldberg.net. To learn more about this project, click on the following link: youtu.be/WFbFioqojxs. The intelligence of Myra Melford's music is found in the details, such as the way she combines disparate voices into coherent yet far-ranging musical statements.  "Snowy Egret" is both the title of her new ENJA album and the quintet that plays its brilliant program.  Blending the laconic yet piercing tones of Ron Miles (trumpet), the often gentle phrases of Liberty Ellman (guitar), the thick active lines of Stomu Takeishi (bass guitar) and the multi-faceted attack of Tyshawn Sorey  (drums), this music looks forward yet has its antecedents in her earlier work. In the mid-to late 1990s, Ms. Melford recorded 2 albums ("The Same River Twice" and "Almost Twice")  with the quintet of Dave Douglas, Erik Friedlander, Chris Speed and Michael Sarin, music as contemporary now as it was then. The lineup also refers back to Be Bread, an ensemble also with guitar, trumpet, piano, bass and drums with the addition of the clarinet of Ben Goldberg.

In the liner notes, Ms. Melford writes that "the music on this recording composed for the "new" quintet is inspired by Eduardo Galeano's "Memory of Fire" trilogy, his history of the Americas."  Throughout the program, the composer stitches musical phrases from South America with blues and jazz strains of the United States. There are moments that explode with furious abandon and others that are so quiet one has to lean into the speakers. "The Kitchen" open on a fiery drum solo, moving into a short riff, then quick duo or trio interactions until a slinky melody line ignites the band, now powered by Takeishi's percussive bass lines and Sorey's propulsive approach into Ms. Melford's expansive solo. The interplay between the piano, bass and drums reaches a thunderous conclusion. The rhythmic drive of "Promised Land" is built upon a short piano figure that is turned every which way by the quintet then listen to the interplay of bass and guitar as well as the drums and piano beneath Miles's fascinating  solo (there is a very short quote from "The Girl From Ipanema" right near the end).  The blend of Ms.Melford's melodica and Miles's muted trumpet at the onset of "Ching Ching/For Love of Fruit" reminds me of the Gil Evans's arranged interactions between Miles Davis and the orchestra on "Sketches of Spain" but soon moves into a funky rhythm that both Sorey and Takeishi continue to stoke through Ellman's exciting solo. When you go back to listen to this track (and others), notice how much music is packed into under 6 minutes. The longest song (8:34), "The Virgin of Guadalupe", opens with solo trumpet, a deliberate and emotional melody is repeated with the addition of the piano and repeated again when the rest of the musicians enter. Slowly, the piece begins to move out, like a flower opening in summer sunlight, the trumpet darting atop the martial drumming, giving way but not totally disappearing as the guitar solo unfolds.  The rhythm section begin to interact with the guitar, taking their cues from the rippling phrases. When the piano re-enters, the gentle circular melody brings the piece to a soft landing.

Ms. Melford's blues-drenched two-handed solo piano opening to "The Strawberry", the final track, seems to bring the music home to Chicago. However, when the band enters, the rhythm takes on a Brazilian feel during the trumpet solo but soon becomes "second-line"; so, perhaps, this is a reminder how New Orleans was the port-of-entry for slaves from Africa and "free" people from South America, how blues and jazz is a true fusion of all the streams flowing in and out of it and how modernity is often a fresh coat of paint on a classic structure. Therein lies the brilliance of what Myra Melford has created with Snowy Egret, music that can go in so many directions and still make you feel at home.  Like the 2 recordings cited in the opening paragraph, the avid listener can find new sounds each time he or she returns to the program. And, one imagines, the journey is even sweeter heard live in concert.

For more information, go to www.myramelford.com.
Posted by Richard B. Kamins at 8:57 PM