"Dark Nights" is the 3rd recording by Avisahi Cohen's Triveni, the trumpeter's trio with bassist Omer Avital and drummer Nasheet Waits. The ensemble's first 2 CDs were recorded on the same day but released 18 months apart.  Since that time, Cohen has toured with his sister Anat and brother Yuval in the 3 Cohens plus spent several seasons with the SF Jazz Collective and is now a member of Mark Turner's Quartet.  His trumpet work has continued to develop to the point where his tone and ideas stand out among his contemporaries.

The new CD includes more of the great Trio interplay - the rhythm section's work is impeccable, supportive and creative.  The first sounds one hears on the opening track "Dark Nights, Darker Days" (one of 6 Cohen originals) is the forceful drums and thrumming bass. For this recording, Cohen uses electronic effects on several cuts, added spontaneously right after the completed take.  There are moments on this track (and others) where the effects sound guitar-like, especially the Jimi Hendrix-like "wah-wahs". The effects return on "Betray", the first of 2 appearances of sister Anat on clarinet. This bluesy track allows everyone to get "down-and-dirty", with a melody and mood similar to that of John Lennon's "Happiness is a Warm Gun." Gerald Clayton makes the group a quintet on "Old Soul", another atmospheric ballad where the clarinet and trumpet now interact with Clayton's electric piano work.  The pianist sticks around, on acoustic piano this time, to support the trumpeter and guest vocalist Keren Ann on the closing track, "I Fall In Love Too Easily" - the rippling piano lines, the muted trumpet, and the gentle, limpid, vocal make for a gentle experience.

Elsewhere, the trio gives adventurous readings to "Goodbye Pork Pie Hat" and "Lush Life", the latter having a "free" feel at times while the former rises and falls on the forceful bass work of Avital and the glorious brush work of Waits.  Cohen and company have fun with Frank Foster's "Shiny Stockings", a piece that the trumpeter first played as a young man in Israel in a big band setting. This track plus the Cohen originals "The OC" (dedicated to Ornette Coleman) and "Pablo" are the most playful tunes on the program; the lighter feel (still played with great energy) of these cuts serve as pleasing counterpoint to the blues and darker moods of the other tracks.

"Dark Nights", recorded in one room with no separation of the musicians, is yet another powerful entry in Avishai Cohen's growing discography. With his longtime partner Omer Avital (they worked together many years in Third World Love and on several of the bassist's solo projects) and new-found accomplice Nasheet Waits, the trumpeter makes music that reverberates in one's heart and soul, making the listener return many times to the deep, soulful, experience. For more information, go to www.avishaicohenmusic.com.

It's hard to believe that "The Great City" (Anzic Records) is the debut record for vocalist Hilary Gardner.  She grew up in Wasilla, Alaska, (former home of Sarah Palin) and since moving to New York City in 2003, has worked with Moby and Twyla Tharp.  For the choreographer's tribute to Frank Sinatra "Come Fly Away", Ms. Gardner appeared on stage backed by a 19-piece band and sang numerous songs in duet with the recorded Sinatra. Currently, she is 1/3rd of the vocal trio Duchess working with Amy Cervini and Melissa Stylianou.

The eclectic program includes several fascinating takes.  Ms. Gardner unearths "This Little Town is Paris", a tune by virtually-unknown Milton Schwartz, a catchy melody wrapped in a ballad.  Asherie's rich counterpoint rises above the Freddie Green-like guitar support.  The pianist shows the influence of Teddy Wilson as he is the lone support on Nellie McKay's honest appraisal of the Big Apple "Manhattan Avenue."  The bouncy "Sweetheart (Waitress in a Donut Shop)", recorded by Maria Muldaur as well as Dan Hicks & The Hot Licks, is a fun track with splendid muted trumpet from Greenblatt and tinkling piano backing.

Best part of "The Great City" is that Hilary Gardner inhabits each song with a genuine spirit plus an honest voice. She does not force her way through material or add unnecessary filigree.  I'd be quite surprised if this engaging music does not brighten your day.  For more information, go to www.hilarygardner.com. Here's a fascinating concept - take the music you loved growing up (in this instance, the hits of Elvis Presley), deconstruct it and then put it back together using techniques you have mastered over the year. "Elvis Never Left The Building" (Playscape Recordings) is the new recording from pianist Peter Madsen's CIA Trio (bassist Herwig Hammerl and drummer/percussionist Alfred Vogel) - Madsen et al remake pieces such as "Hound Dog", "Jailhouse Rock" and "Don't Be Cruel"" (plus 7 other familiar tunes of the King) in ways that you might recognize the tunes. The bluesy lament "Heartbreak Hotel" becomes an uptempo romp (inspired by both Bud Powell and hip-hop rhythms while "Devil In Disguise" leans more towards "Dr. Faustus" and The Bad Plus than to Elvis.

Yet, the CIA (Collective Improvising Artists) certainly sound like they are having a great time re-imagining these pieces.  "Can't Help Falling In Love" would not sound out of place on a recording by Keith Jarrett's Standards Trio. The ensemble rampages through "Don't Be Cruel", the rhythm section lighting a fire beneath Madsen and he enjoys burning through the piece. "Hound Dog" has both bite and bark (well, howl to be exact) and goes through numerous changes, from a feeling of deep blues to a funky bass-and-drum section (right after Hammerl's solo) before building to a frenzied climax.

If you are a dedicated fan of Elvis Presley, chances are great that you will dislike this music.  But, if you love to be challenged and are willing to let your imagination have a field day (as Peter Madsen and company do), then you'll agree that "Elvis Never Left the Building."  3 impressive musicians take this music in myriad directions and do so in a very satisfying manner. All hail Peter Madsen's CIA Trio and, o yes,  "Long Live the King!"  For more information, go to www.petermadsen.us. 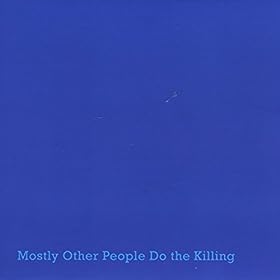 When I was a young AM-radio listener, the first Black music I heard was performed by people such as Pat Boone ("Ain't That a Shame"), Bill Haley & The Comets ("Shake, Rattle and Roll") and Georgia Gibbs ("Dance With Me Henry").  Later on when the British Invasion landed in the US, groups such as The Beatles ("Anna") and The Rolling Stones ("It's All Over Now") were quick to credit American blues, r'n'b and Motown as influences. Many of these "cover tunes" used the same arrangements and cleaned up the lyrics (the earlier hits certainly did.)

So, what does one make of "Blue" (Hot Cup Records), the new CD by Mostly Other People Do the Killing, a reiteration of Miles Davis's 1959 classic "Kind of Blue"?  The 2014 recording is not "kind of Kind of Blue".  The Quintet (with Jon Irabagon playing the parts of alto saxophonist Julian "Cannonball" Adderley and tenor saxophonist John Coltrane while pianist Ron Stabinsky has the roles of Bill Evans or Wynton Kelly) plays the 5-track Lp exactly the way Davis and company played it 55 years ago.  The original is the best selling jazz album of all times, selling over 20 million copies in its original edition and numerous reissues. Kudos to the band - the 2 mentioned above plus Peter Evans (trumpet), Moppa Elliot (bass) and Kevin Shea (drums) - for reminding those of us familiar with Davis recording just how impressive it was for its time (and ours). Evans and Irabagon must have worked incredibly hard to master the tonal qualities of the musicians whose parts they are re-creating while Shea shows just how under control Jimmy Cobb was throughout the program.

We live in a world where people discover music every day, whether it was recorded this year or way in the past.  MOPDtK will not tour "Blue" (as it is, Evans has left the group since the recording) so the CD will live as an impressive work of art, one that has already generated plenty of discussion pro and con and will do so for some time. My review is 5 stars for the music, 5 stars for the musicianship and the jury is out on the concept (yet this is some of my favorite music and I really like listening to it.)  For more information, go to www.hotcuprecords.com.
Posted by Richard B. Kamins at 9:42 PM