After a 3-gig weekend last week, The Side Door Jazz Club in Old Lyme has only 1 show this week but it's a good one.  On Friday, Jan and Ken welcome the duo of Steve Wilson (alto saxophone) and Lewis Nash (drums) - their new CD "Duologue" (Manchester Craftsmen's Guild) is a joyous blend of classic works by Duke Ellington, Thelonious Monk, Thomas "Fats" Waller and others plus several fine originals (my review is here).  They've been friend and occasional bandmates for many years and a performing duo since 2001.  Wilson has the sweetest tone on alto, unlike the broader, bluesier, tones of Johnny Hodges, David Sanborn or Arthur Blythe.  Nash has played with many groups and artists over his career, from Joe Lovano to the late Mulgrew Miller.  Together, they are just a delight!  This should be quite an evening of music.

Though Bakir is well-versed in standards, his original music is also very impressive as are his fleet-fingered improvisations.  Scatz is bringing in some impressive bands and audiences are learning just how good the food is as well. 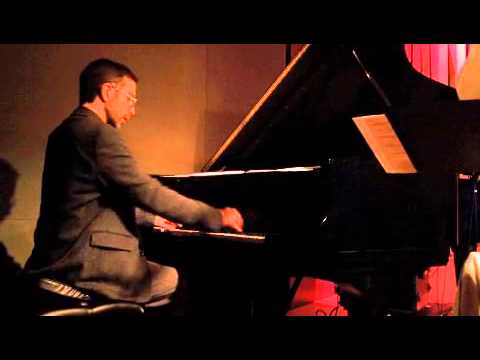 On Saturday October 18, the Jazz Samaritan Alliance perform at 8 p.m. in the Asylum Hill Congregational Church, 814 Asylum Avenue in Hartford. The show is part of the Jack and Edie Murphy Music for Humanity concert series. The JSA, an organization of musicians committed to creating and performing socially-conscious original music,  features the talents of Noah Baerman (piano), Jimmy Greene (tenor and soprano saxophones) and Kris Allen (alto saxophone) - joining them for this show will be vibraphonist Chris Dingman and the great New York City-based drummer Rudy Royston.  Tickets are $25 per person and every penny raised will be donated to Foodshare of Greater Hartford (find out more about them at www.foodshare.org.) This will be an evening of great music made by fine people for a really important cause.  For tickets and more information, go to www.ahcc.org/event/3652 or call Mary Way at 860-278-0785.
************************************** 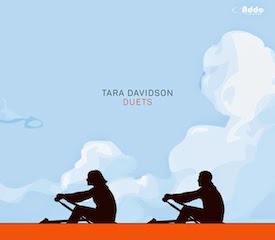 All 13 tracks are originals (either by Ms. Davidson or her collaborators) and range from the intimate to the expansive. Braid, the only musician who appears more than twice (the opening 2 cuts as well as the closer), is an impressive composer and forceful musician.  His pieces "Lele Tune, Parts 1 and 2", are built off a strong melody and the duo build up quite a head of steam on both performances.  Ms. Davidson's alto sax sound is vibrato-free with articulate notes but she can also play with fire.  With Murley (who was her first saxophone teacher and first duet partner), they create the sweet boppish "130 E. 39th St.", sharing lines and supporting each other while the tenor player's original "Sheep Walking" may remind some of the duets of Oliver Lake and Julius Hemphill (the more straight-ahead pieces).  Guitarist Occhipinti, who has recorded 2 duo CDs with Murley, creates a spacious musical landscape on "Silver Skates", allowing Ms. Davidson's intricately crafted soprano saxophone lines to rise above his chordal accompaniment. He also appears on Ms. Davidson's "Murphy's Law", a faster piece that finds the musicians supporting each other, moving in and around each other's lines and responding to the energy each gives out. Tenor saxophonist Hogg, who was a classmate of Ms. Davidson at the University of Toronto and a duet partner ever since, meshes his sound with the alto sax on the delightful medium-tempo boppish piece "Train to Tarrytown" and contributes the more forceful yet still sweet "The Neigh-Sayers". Downing, the bassist in Ms. Davidson nonet, plays cello on his "Kontrbas Semaisi", a lovely piece in which he plucks his instrument in the style of Oscar Pettiford and Abdul Wadud.  The melody is one of the prettiest on the CD, having a folky edge and allowing for the rippling alto lines to cascade down over the cello.  He plays bass on Ms. Davidson's "The Halyconian Years", also a ballad with a bass line that may remind some of the late Charlie Haden and how he interacted with Ornette Coleman and Jan Garbarek.

Pianist and vocalist (she does not sing here) Laila Baili plays on 2 of the more introspective tracks.  Her descending chords and impressionistic figures opens "For Glenda" - when the full piano chords begin in the background background (sounding not unlike Gary Brooker's work with Procol Harum), the soprano sax enters with the wistful then soulful melody. Ms. Davidson stays on soprano for their second collaboration, Ms. Biali's "The Good Earth", a composition that has the feel of both Bruce Hornsby and Art Lande (especially his duo with Jan Garbarek on "Red Lanta").  The rousing middle and closing sections are, at times, glorious and emotionally satisfying.

By the time one reaches the final track, Braid's "Colebourn M.D.", another handsome ballad with fine interplay between the alto sax and piano, you understand how good music can come from good friendships, from the trust that is built from years of playing, experimenting, having fun discovering how far each other is willing and able to go, or just relaxing playing a simple melody.  Tara Davidson is a lucky musician to have colleagues who are friends and collaborators, ready to head into the known or unknown. "Duets" is delightful, bright, audacious and emotionally honest.  For more information, go to taradavidson.ca.

Tenor saxophonist Jerome Sabbagh, a native of Paris, France, and a resident of New York City for nearly 2 decades, has worked with his quartet of Ben Monder (guitar), Joe Martin (bass) and Ted Poor (drums) for a decade.  "The Turn" (Sunnyside) is the ensemble's 3rd release and first since 2007.  The material the saxophonist writes for his partners not only emphasizes their individual strengths but also how well they work together.  The rhythm section is quite supportive while Monder is a great accompanist, knowing when to hold back and when to let loose (and he certainly can wail).

On initial listens, ballads such as "Long Gone", "The Ascent", and Paul Motian's "Once Around the Park" (the only piece not composed by the leader) stand out.  Poor's drumming is quite active yet never intrusive while Martin, who is known for his steady hands on bass, fills out the bottom.  Sabbagh lets the songs breathe, not rushing into solos, giving Monder plenty of room to say his piece.  The guitarist's quiet solo on "The Ascent" is melodic and tasteful while his active chordal work behind the saxophone is splendid.

Monder also displays his ability to rip off forceful solos as he does on the title track and "Banshee", the latter blazing atop the fiery drum and cymbal work of Poor.  His "shredding" solo enlivens the lengthy "Cult", wailing in Hendrix-like fashion over the strumming bass and thrashing drums.  And there are surprises along the way.  "The Rodeo" is a blues shuffle, replete with an insistent swing from the rhythm section while the front line digs in for some fun - Monder's tasteful comping and understated solo match the laconic style of Sabbagh.

The leader is not one to waste notes; he never overplays his hand. His sound is fairly cool, at times mellow (not unlike the alto sax sound of Lee Konitz), his approach unhurried throughout the set.  His tasty solo on "Long Gone" grows out of the handsome melody while he seems to hold back on "Cult", playing short lines that seem to melt into the rhythm section.  One gets the idea Sabbagh likes to compose for this band because the vast majority of the melodies are well constructed.  "Electric Sun" closes the program, a piece with a "rock" feel coming from the powerful yet steady drumming and a "country" feel from Monder.  Meanwhile, the saxophonist builds his solo logically from the melody, his phrases opening up and getting longer as he moves forward.

"The Turn" is not designed to blow you away; it's more like a shaft of sunlight on a cloudy day, a cheery note from a friend, a welcome respite from the craziness of the outside world.  Yes, there are frenzied moments but Jerome Sabbagh keeps his emotions in check throughout and the music shines.   For more information, go to www.jeromesabbagh.com.
Here's "The Rodeo" for your delectation: