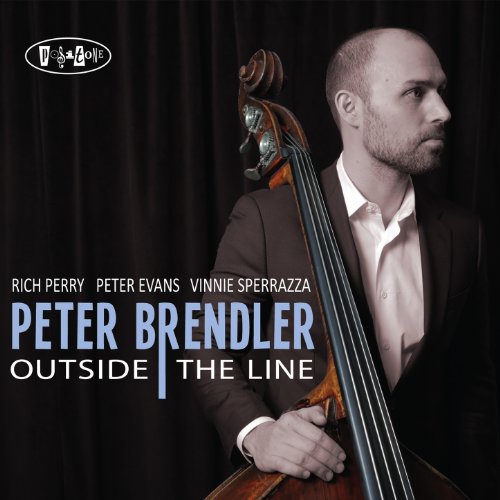 Bassist Peter Brendler, a native of Baltimore, Maryland, graduated from the Berklee School of Music and then went on to the Master's Program at the Manhattan School of Music. He's worked with pianist Frank Kimbrough, drummer Barry Altshul, and saxophonist Jon Irabagon (who recorded his "Foxy" CD with Altshul and Brendler) and his debut as a co-leader was a 2013 date with guitarist John Abercrombie.

"Outside The Line" is the first CD under his name only and is a "smoker" from the get-go.  Featuring Rich Perry (tenor saxophone), Peter Evans (trumpet, piccolo trumpet) and Vinnie Sperrazza (drums), the quartet rambles, rumbles, "splats", sputters, wails, struts and strolls through a 12-song program that features 9 originals and 3 inspired covers.

On the "covers" side, the program starts with the band speeding through Chet Baker's "Freeway", a hard-bop romp that features Sperrazza's "dazzle-dazzle" brushwork, Evans' inspired piccolo trumpet work and Perry's bluesy sax work.  There's a funky recreation of Lou Reed's "Walk On the Wild Side", complete with Perry and Evans taking the part of the "doot-da-doot-da-doot" chorus. Sperrazza's inspired brush work and the leader's full-toned bass notes give the soloists plenty of support.  The final cover is an inspired reading of Ornette Coleman's "Una Muy Bonita" which opens with a fine bass solo that slowly eases into the recognizable melody (the foursome does an excellent job of shifting the tempo throughout).

Several of Brendler's originals hew close to the Coleman Atlantic Records Quartet sound, such as the hard-driving "Lawn Darts" (it's a treat listening to how the bass and drums work together and independently to move this music forward).  In another direction, "Pharmacology" is a bopping blues track with a melody line that could have been played by the Clifford Brown-Max Roach Quintet.  Evans and Sperrazza goose each other along during the trumpet solo and then the drummer trades "4's" with the bassist. There's a noisy quality to the rapid give-and-take of Perry and Evans on "Openhanded" while "The Darkness" mines the blues in the musicians' veins.  The trumpet solo pushes against the medium-tempo stroll the bass create while the tenor saxophone joins in on the stroll.  The drone created by the bowed bass, trumpet and saxophone to one "Indelible Mark" induces shivers but also displays Brendler's splendid technique. He's the "lead" voice for the opening 1/3rd of the track.  Evans and Perry, though they come from different musical genres (the saxophonist has worked with the Maria Schneider Orchestra while the trumpeter is a mainstay in Mostly Other People Do The Killing), work extremely well together. The CD closes with "The Golden Ring", a series of ferocious interactions among the quartet. Sperrazza's drumming is inspired throughout, he and Brendler often function like lead instruments with their own thematic material.

One could call "Outside The Line" "free jazz" but the music is so much more.  The musicians provoke, challenge and complement each other, giving the listener much to chew on.  Peter Brendler has created quite the gem of a CD - I'd put his release right alongside Eric Revis's smashing new CD "In Memory of Things Yet Seen" as 2 of the best recordings by a bassist of the past several years.  To find out more, go to www.peterbrendler.com. 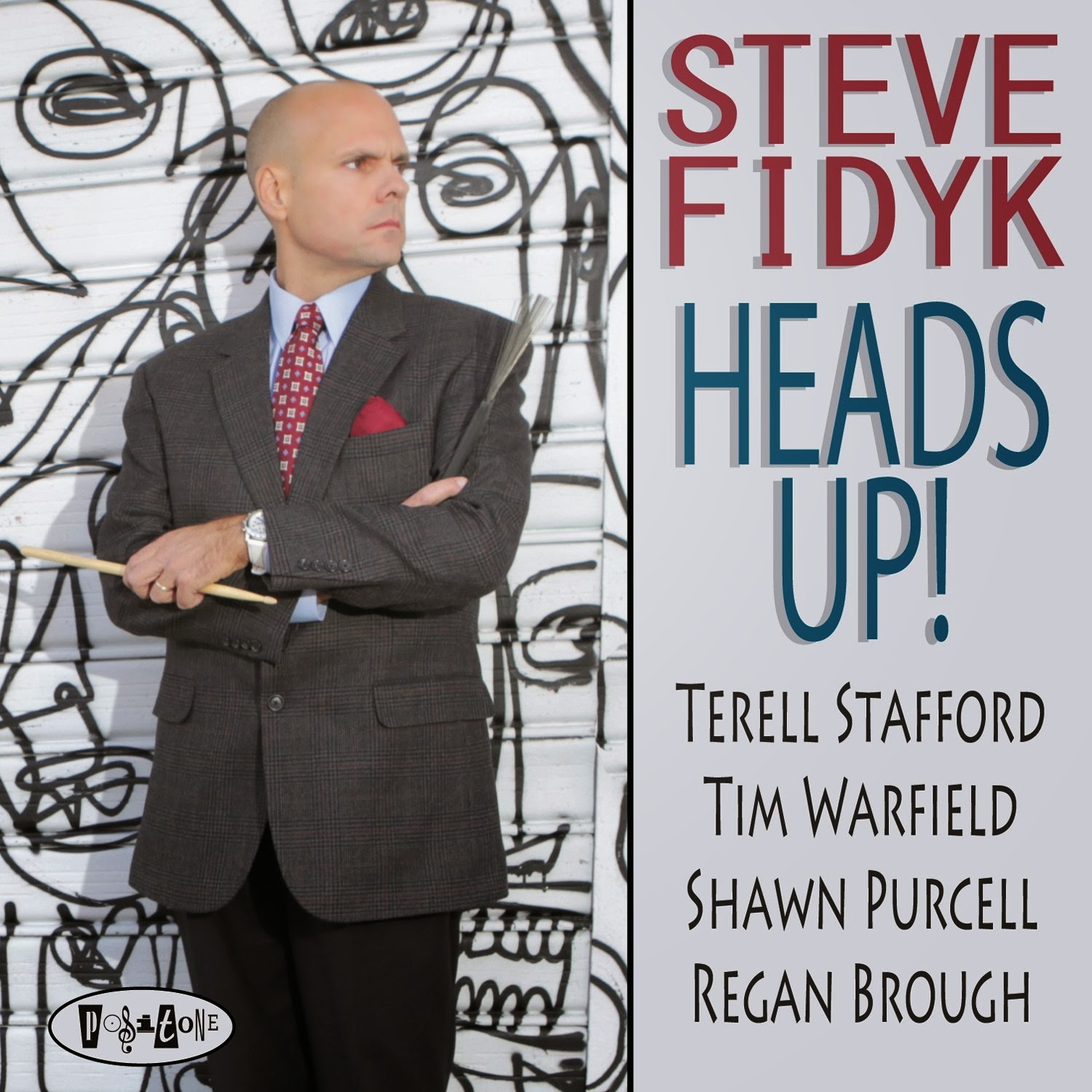 Drummer Steve Fidyk, the son of a drummer, is, perhaps, best known for his work with big bands (although he has also recorded contemporary Jewish music with Robyn Helzner and played with numerous Symphony orchestras). Meeting drummer/educator Joe Morello (Dave Brubeck Quartet) changed Fidyk's life as his mentor helped not only how to play but also how to be a better teacher.

"Heads Up!" is his debut as a leader and it's a solid effort. Engineer Michael Marciano (of Systems Two in Brooklyn, NY) does a great job of capturing Fidyk's excellent brush work.  The quintet for this date features Terell Stafford (trumpet, flugelhorn) Tim Warfield (tenor sax) and rhythm section from the Armed Services, bassist Regan Brough (from the U.S. Army Blues) and guitarist Shawn Purcell (the United States Naval Academy Band).  The 9 cuts include original songs by the leader, such as the energetic opening track "Untimely", the extremely funky "The Flip Flopper" and the sweet ballad feature for Stafford's flugelhorn "T.T.J".  Purcell is an excellent foil for the front line, never intrusive, always supportive.  His work is often subtle, playing quiet chordal patterns behind the soloists; yet, he can cut loose as well, shredding his way through "The Flip Flopper." His piece for trio, "Might This Be-Bop", features strong solos from him, bassist Brough and Fidyk.   Stafford is such a great player, whether soaring over the changes as he does on Fidyk's "The Bender" or playing muted and mellow on the rearrangement of Jules Styne's "Make Someone Happy."  He returns to flugelhorn on the slow take on Johnny Nash's reggae hit "I Can See Clearly Now", helping to create a big city, late night vibe.  Warfield's bluesy tenor is heard to great effect on several tracks, including Hank Mobley-like turns on Purcell's "Last Nerve" and the hard bop cum disco take on Cole Porter's "Love For Sale."

Steve Fidyk sounds like he's having a great time on "Heads Up!"  He keeps the tunes motoring along without intruding while pushing the soloists to greater heights on several occasions.  Posi-Tone Records, like Criss Cross Records, is a label that is often billed as a home for mainstream jazz. In actuality, both labels and their respective producers (Marc Free and Gerry Teekens), like to mix things up.  Yet, "Heads Up!" (which features Criss Cross artist Tim Warfield - he has 7 releases on the Netherlands-based label) is "straight-ahead" and gloriously so.  For more information, go to www.stevefidyk.com. 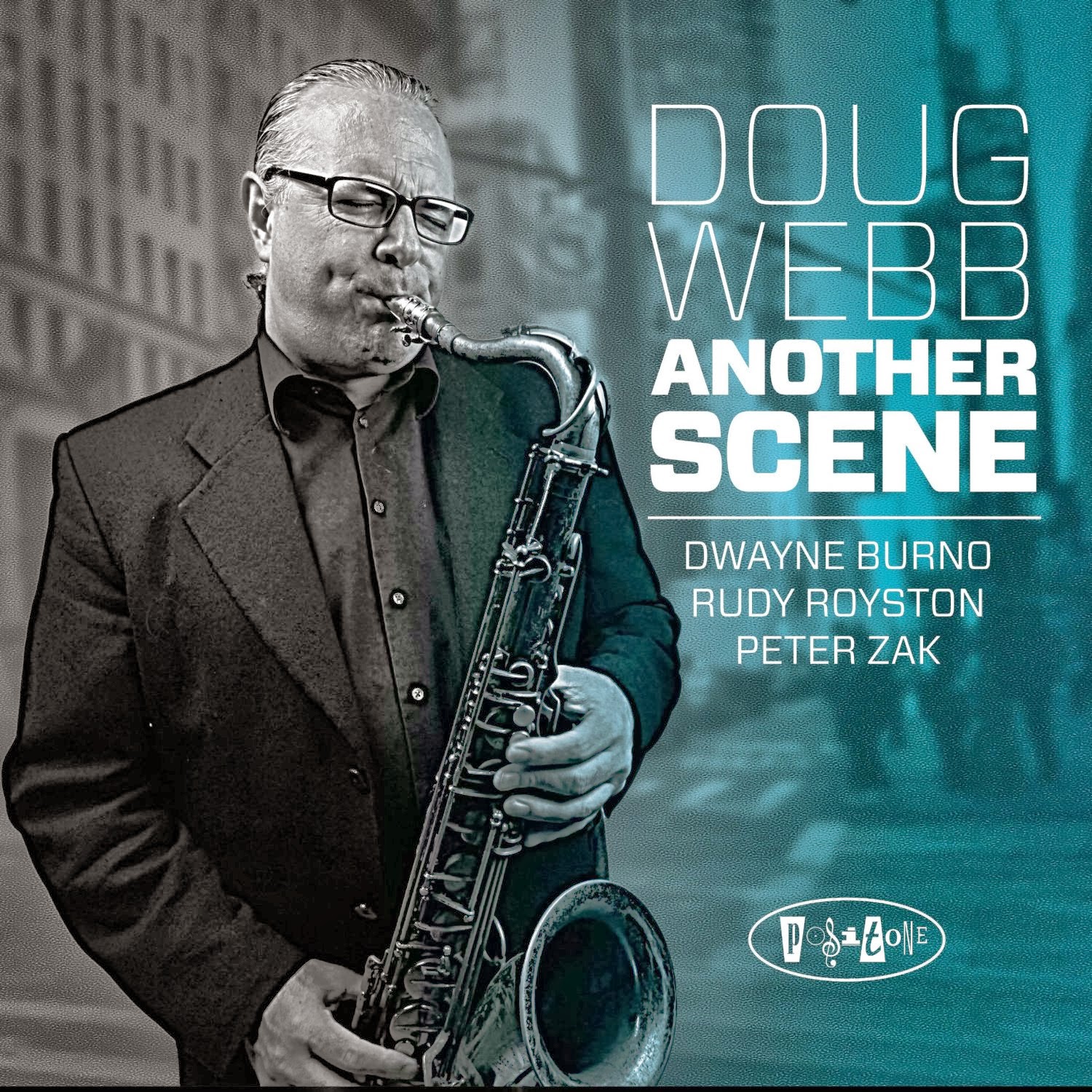 For his 5th Posi-Tone release, tenor saxophonist Doug Webb has organized a new group of East Coast musicians (3 of his previous 4 previous CDs featured the rhythm section of drummer Gerry Gibbs and bassist Stanley Clarke) - recorded in February 2013, "Another Scene" features the late bassist Dwayne Burno (who passed in late December of last year), pianist Peter Zak and the most impressive Rudy Royston (drums).  The change of scenery has energized Webb who picks up on the power of Royston's drumming and Burno's muscular bass lines and delivers a strong performance.  That's not to say this is all fire and no sweetness. There are several fine ballads including Dave Brubeck's "Southern Scene", Vernon Duke's "What Is There to Say" and Benny Carter's "Only Trust Your Heart" (a duo for saxophone and piano).

However, chances are good you'll remember the fiery saxophone and drums exchange that makes up "Rhythm With Rudy" and the hard-driving opening 2 tracks, "Mr. Milo" and "One for Art" (dedicated to Webb's former bassist, the late Dr. Art Davis).   "Another Step" is Webb's take on John Coltrane's "Giant Steps", with the saxophonist lying over the powerful piano chords and hard-charging rhythm section. Later in the program, Webb's "Verdi Variations" also has a Coltrane feel in the piano chords, the rubato work of Burno and Royston plus the feverish tenor of the leader. In a clever programming turn, the following track is Thad Jones' "Bird Song"  which features a sweet solo from the leader and a rocking bass statement from Burno.

"Another Scene" is, in my opinion, most complete recording I have heard from Doug Webb. His earlier CDs all had their moments but this one has many more.  Could be the great rhythm section, could be that Webb liked the change of scene, could just be his continuing maturity as a performer.  Whatever was in the air on the February day worked its magic on this session.  For more information, go to www.dougwebb.us.