Ms. Trapp, a native of Hartford, CT, earned her Bachelor's Degree from City University of New York and a Master's Degree from Mills College in California.  Her compositions have been performed by guitarist Fred Frith, Rhymes With Opera and the Del Sol String Quartet. She has played horn with the Andrew Weathers Ensemble and composer Robbie Lee.  She is currently writing a site-specific  chamber opera for the Mark Twain House in Hartford based on the life of Susy Clemens to be performed later this year.

PascAli consists of bassists Pascal Niggenkemper and Sean Ali who use many different items to augment their acoustic basses including aluminum cans, lampshades, balloons and other "found objects. The duo's 2012 debut CD is appropriately titled "Suspicious Activity" (Creative Source) and you can find out more by going to www.pascalniggenkemper.com/pascali.html.

For more information about the concert, go to uncertaintymusic.com where you can also access directions to the performance venue.

The big news of the week is the announcement of the Spring 2014 Concert Series at Firehouse 12, 45 Crown Street in New Haven. The 13-week program commences on March 21 with Elm City native son Ben Alison and his Trio.  Scheduled to join the bassist/composer are guitarist Steve Cardenas (whose upcoming Sunnyside release is a smash) and reed master Ted Nash.

The following Friday (3/28) is another trio and another Connecticut native (well, he was born in New York City but raised in Greenwich).  Pianist/composer Kevin Hays brings his New Day Trio (bassist Doug Weiss and drummer Bill Stewart) to town.  April 4, the quintet known as Kneebody arrives with its fun blend of jazz, rock and more. On April 11, Thumbscrew - guitarist Mary Halvorson, bassist Michael Formanek and drummer Tomas Fujiwara (pictured left) - makes its CT debut (although it's the 13th time the guitarist has played the venue and the 7th for the drummer.)  Their debut CD was issued in January of this year on Cuneiform and it's quite an aural treat.  Saxophonist Loren Stillman, who appeared at the Firehouse last November as a member of vibraphonist Chris Dingman's ensemble, returns on April 18 with his quartet Bad Touch.  His band includes CT native (Greenwich) Gary Versace (organ), Nate Radley (guitar) and Ted Poor (drums). 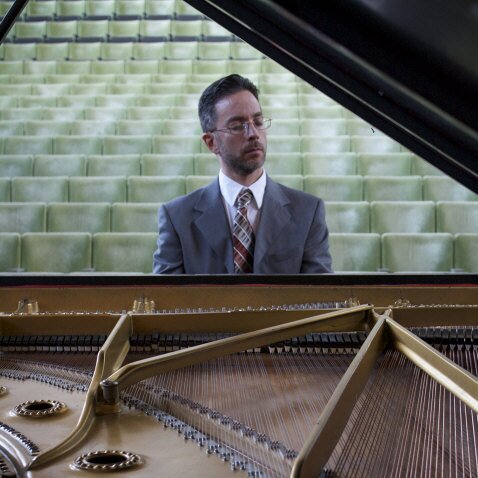 The dapper pianist/ composer/educator/author Noah Baerman leads his Jazz Samaritan Alliance into The Firehouse on May 9.  The ensemble includes saxophonists Kris Allen and Jimmy Greene, bassist Henry Lugo, vibraphonist Chris Dingman and drummer Otis Brown III. Among other things, they will be celebrating Mr. Baerman's new CD release, "Ripples", a recording that features many different musicians but whose central theme is to raise consciousness about social issues in this country and the world.

On Friday May 16, saxophonist/composer/salsa dancer Russ Nolan brings his Quartet to town to celebrate the release of his CD, "Relentless" (my review is here).  It's the same group that's on the recording including Manuel Valera (piano), Michael O'Brien (bass) and Brian Fishler (drums).

I have already circled May 23 because that's when drummer Barry Altschul comes to the Elm City with 3Dom Factor (saxophonist Jon Irabagon and bassist Joe Fonda).  The Trio's 2013 self-titled TUM Records debut release is filled with great interactions, smart soloing and exciting music.  May comes to a close with the duo of Brandon Ross (banjo, guitars, vocals) and Stomu Takeishi (bass) - their upcoming Sunnyside release, "For Living Lovers", is a passionate and challenging collections of songs unlike much of what one hears these days.

Bassist/composer Linda Oh released "Sun Pictures" on Greenleaf Records in 2013 to great critical acclaim. Kneebody's Ben Wendel is on the CD and will be part of the live performance on June 6 along with guitarist Matt Stevens and drummer Rudy Royston - this should also be quite an evening of music.

The following week (June 13) is the final week of the series and features the Satoko Fujii Trio +1.  Ms. Fujii, one of the most prolific composers of the past decade (she also leads several big bands here and in her native Japan), is a fascinating pianist, more intent on setting the mood than being a technical wizard.  Her husband Natsuki Tamura plays trumpet, Todd Nicholson is the bassist and Takashi Itani is the fine young drummer.

Every concert includes 2 sets - separate admission charge to each - and there are a limited number of season tickets available. To find out more about the season, go to firehouse12.com or call 203-785-0468.