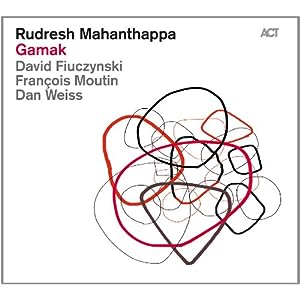 In "Gamak" (ACT Music), alto saxophonist and composer Rudresh Mahanthappa has added one more jewel to his discography.  The interactions of the saxophonist with David Fiuczynski (electric guitar), Francois Moutin (acoustic bass) and Dan Weiss (drums) is wondrous, there is an elevated energy level (yes, even higher than his previous ACT CD, "Samdhi") and the results are exciting. From the opening clarion call of the saxophone atop the funky guitar on "Waiting Is Forbidden", one knows this is no ordinary music.  Weiss's driving drums and Moutin's fluid bass lines underpin this project; another fascinating aspect of the music this ensemble creates is that it is really beyond category.  Sure, there are Indian scales in several songs, the occasional hard-rock or funk attack from the rhythm section and plenty of Fiuczynski's fiery guitar lines, but this music never "settles" into one particular style.  What it does do is kick quite hard much of the time.  "We'll Make More" has a rapid-fire melody line, stopping for a short bass solo - yet, the quartet comes out that solo with even "fire" in its approach.  Mahanthappa's alto lines flutter, soar, and slither over the rhythms.  Even on the unaccompanied introduction to the one ballad on the disk, "Ballad for Troubled Times", one is impressed by his flurry of notes. The body of the piece is quite slow and his interaction with the guitarist blends long tones with soulful melodic lines.

I enjoy the fine work of Moutin and Weiss, who play without cliches and continually take chances;  the direction must come from the leader, he seems to relish the adventure and his frequent spars with Fiuczynski are exhilarating. Is this music for the casual listener? No way, but "Gamak" should appeal to lovers of adventurous music.  For more information, go to www.rudreshm.com.

After the group returns from Europe in early February, they'll play a series of dates in the US, including  a visit to Sprague Hall on the campus of Yale University in New Haven, CT, on February 22. For ticket information, click here. 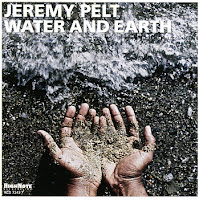 After a series of highly-regarded CDs featuring his Quintet, trumpeter Jeremy Pelt returns to a more "electric" side of his music on "Water and Earth" (HighNote Records).  This is seductive music in that it rarely wails but includes songs that feature long flowing melody lines, burbling Fender Rhodes lines and a rhythm section that often not only shimmers but can really drive.  This program has several fiery moments, such as the skittering lines that open "Boom Bishop" and the fast-paced "Prior Convictions" - the latter track displays the massive groove of Dana Hawkins (drums) and Burniss Earl Travis (electric bass). The duo makes "Pieces of a Dream" a powerful cut, with their active lines and rhythmic zeal.

Yet, one is also easily seduced by the handsome ballad work on Stanley Clarke's "Butterfly Dreams" and the all-acoustic "Meditations on a Conservation We Had".  The Clarke composition, which dates back to the bassist's debut recording, has a diaphanous feel, Pelt's phrases moving in and out of the percussion washes.  "Meditations.." has a soft melody played on trumpet and Roxy Coss on tenor saxophone and then the two wrap their solo lines around each other.  Ms. Coss, who is a member of DIVA Jazz Orchestra, plays on 6 of the 9 tracks, alternating between tenor and soprano.  Her tenor solo on "In Dreams" rises above the martial drums and the atmospheric Fender Rhodes lines of David Bryant while her lively soprano work on "Mystique" displays both grace and fire as well as the influence of Wayne Shorter  Vocalist Ra-Re Valerde delivers a sensuous message on "Stay", her voice overdubbed and electronically altered, while Pelt's trumpet effects create an other-worldly feel.  It's the one cut where the electronics feel forced.

"Water and Earth" illustrates that Jeremy Pelt is a musician who not only does not worry about labels but transcends genres with ease.  His writing continues to mature while his trumpet playing shines throughout.  Don't be put off by the Rhodes and the occasional "effects, this recording is worth paying attention to.  For more information, go to jeremypelt.net. 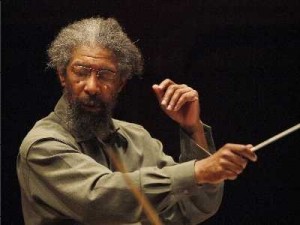 Composer-conductor-arranger-cornetist Lawrence "Butch" Morris passed away at the age of 65 (12 days before his 66th birthday.) I first heard of his work as a musician when he recorded with saxophonist David Murray's Octet on several Black Saint recordings and as the arranger of Murray's Big Band venture of DIY.  He is, perhaps, best known for "conduction", his own creation of "conducted improvisation" (In his tribute to Morris in the New York Times, Ben Ratliff does an excellent job of defining the term - read it here while Mr. Morris explains his contribution to modern music at www.hallwalls.org/music/194.html.  He did not release many recordings but New World Recordings did issue a 10-CD set of his "Conductions" in the 1990s (and it's still available.) He also did work with the Burnt Sugar ensemble.

Like the late Bill Dixon and the very-much alive Muhal Richard Abrams as well as Anthony Braxton, Lawrence "Butch" Morris created music that built upon and extended the "tradition" - he will be missed and, one hopes, his contributions will live on.
Posted by Richard B. Kamins at 6:24 PM