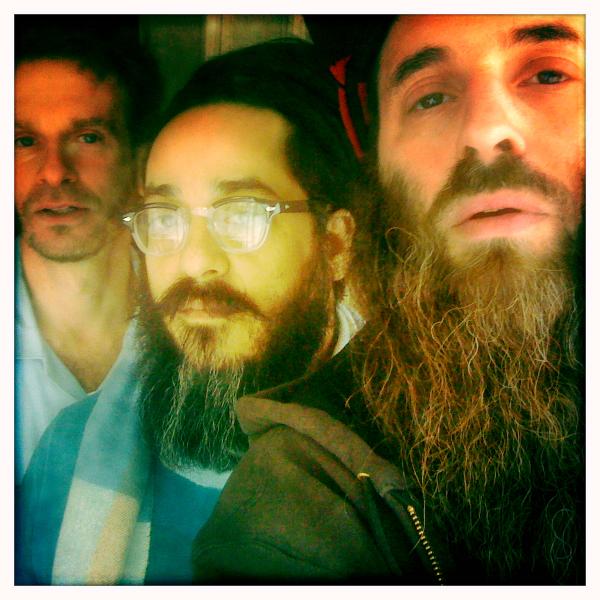 Pianist Jamie Saft, former resident of Fairfield, CT, is well-known for his eclectic musical taste ranging from metal music to jazz to "dub" music.  He's returning to Firehouse 12, 45 Crown Street in New Haven, for the 3rd time but his first as a leader (he twice performed in the performance space/recording studio with saxophonist Jeff Lederer.)  The New Zion Trio - Saft (keyboards), Jonathan Moran (electric bass) and Craig Santiago (drums) - plays a fascinating and often mesmerizing blend of "Roots Reggae", dub and trance music with a hearty dose of jazz. NZT's latest CD, "Fight Against Babylon" (Veal Records), may be Saft's finest recorded moment in that so many different styles of music are played so effortlessly.  (FYI - the recording featured bassist Larry Grenadier (Brad Mehldau Trio).)

The New Zion Trio plays 2 sets - 8:30 and 10 p.m. (separate admissions) - and one expects the space to packed with fans of the hard-working Saft (he has worked with composer John Adams, Laurie Anderson and the Beastie Boys plus is a member of John Zorn's Electric Masada and Grizzly Bear.)  For ticket information, go firehouse12.com or call 203-785-0468.

When someone close and dear to us passes, they surely live in our memories.  Before trumpeter-composer Dave Douglas's mother passed last year, she chose the music for her memorial service.  Douglas took her suggestions, arranged the pieces for a 5-piece ensemble plus, for the first time, he's working with a vocalist.  Aiofe (eee-fa) O'Donovan, who spent the past decade working with the bluegrass band Crooked Still, sings on 6 of the 9 tracks (she also adds acoustic guitar on several cuts.)

Her gentle voice is one of many reasons to find "Be Still", Douglas's latest recording for his Greenleaf Music label.  As usual, the trumpeter is surrounded by stellar musicians including Jon Irabagon (tenor saxophone), Matt Mitchell (piano), Linda Oh (bass) and a subdued yet still adventurous Rudy Royston (drums). The trumpeter's mother was quite supportive of her son and attended as many of  his  concerts as she could - knowing what kind of music he played, she made suggestions understanding he would make them work in a way that was respectful to her wishes as well as his style of playing.  The program is bracketed by 2 classical pieces; the opening cut, "Be Still My Soul", posits lyrics by the 18th Century hymn writer Katharina A. von Schlegel with music composed by Jean Sibelius while the closing track, "Whither Must I Wander" is a melody composed by Ralph Vaughan-Williams. In between, there is a bluegrass tune from Ola Belle Reed ("High On a Mountain"), the 18th Century American hymn "God Be With You", 2 traditional pieces ("Barbara Allen" and "This Is My Father's World") and 3 Douglas originals.  Don't expect dirges or mournful blues - this music draws one in with its lyricism and, as you listen closer, you'll notice the richly melodic work of Mitchell, the highly expressive work of Irabagon (who proves yet again he does not need to roar to catch the attention of the listener) and the strong counterpoint and support of Ms. Oh.  The band pushes quite hard on the original piece "Middle March" (Royston at his most explosive) and displays a gospel fire on "Going Somewhere With You" (another original).

Ms. O'Donovan's voice is, at times, hushed and reverential yet she does not hold back on the rocking "High On The Mountain". Listening to her sweet intonation on "Barbara Allen" (working atop and with the smart arrangement of the trumpet and saxophone), one can imagine sitting on a big back porch on a warm autumn day.  She's not a jazz singer yet her readings of the words move so easily with the musical worlds Douglas creates that it sounds as if she has sung with this group for years.

"Be Still" may strike some as a tribute album but it is much more than that.  Over the course of 18 years and 36 recordings, Dave Douglas has explored many different sides of creative music.  His music never sounds forced or phony; rather, his constant exploring and inquisitive mind allow the listener keen insights into his inner being.  This music brings us very close to the center of his soul, on a journey with 4 sympathetic musicians and a lovely voice, all of which resonates long after the last notes fade.

For more information, videos and audio selections, go to www.greenleafmusic.com.
Posted by Richard B. Kamins at 9:37 PM