Duo at The Firehouse + CD Pick 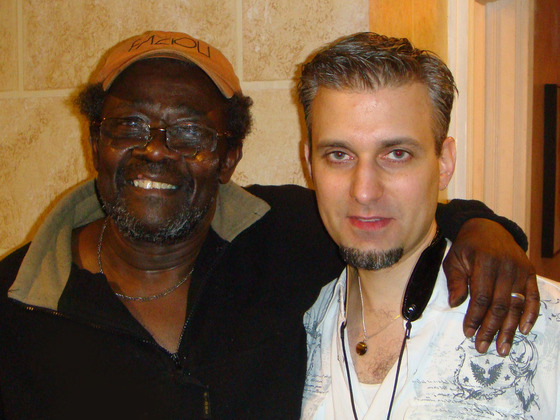 The Spring 2012 Concert Series at Firehouse 12, 45 Crown Street in New Haven, has hit its stride and is firing on all cylinders.  This Friday night (4/20), the recording studio/performance space welcomes the duo of Mike DiRubbo (alto saxophone) and Larry Willis (piano).  DiRubbo, a native of the Elm City, studied at the University of Hartford/Hartt School of Music with the great Jackie McLean (as did last week's headline, Steve Lehman). With the help of Hartt School alum/current faculty member Steve Davis (trombone), the saxophonist began to make inroads into the New York City club scene.  Over the decade+ since making the move, DiRubbo has worked with pianist Michael Weiss and tenor saxophonist Eric Alexander.  He has recorded with bassist Mario Pavone, trumpeter Jim Rotondi and is a member of organist Brian Charette's Organ Sextette (see my review here.)  DiRubbo has issued 7 Cds as a leader, including "Four Hands, One Heart" (Ksanti Records), his duo with Willis.
Larry Willis has been an active musician for the better part of 5 decades, working with numerous great musicians.  Like DiRubbo, he came under the tutelage of Jackie McLean, making his recording debut on the saxophonist's 1966 Blue Note Lp, "Right Now" (Willis even contributed 2 songs to the session.) Willis is one of those musicians who has been involved with all types of musicians, from Cannonball Adderley to Carmen McRae to Stan Getz to Art Blakey to a 7-year stint with Blood, Sweat & Tears. He's equally at home in Latin music as well as classical.
The reviews for "Four Hands, One Heart" have fairly glowing and you'll be hear why on Friday.  Messrs. DiRubbo and Willis will play 2 sets, 8:30 and 10 p.m. - for ticket information, go to firehouse12.com or call 203-785-0468.   To find out more, go to ksantirecords.com.

Pianist Kenny Werner has recorded in a duo setting (Toots Theilemann), numerous trio settings, big band, string ensemble and quintet but "Me, Myself & I" (Justin Time) is his first solo piano effort.  Recorded live over 2 nights at the Upstairs Bar & Grill in Montreal, Quebec, Werner stretches out on a program of 7 tunes.  The pianist is both wonderfully melodic and highly inventive so the listener can be enthralled as Werner allows the music to move in various directions over the course of the performance.  The one original piece, "Balloons", is a fairly new one, having been recorded in a quartet recording released in 2011 - here, the tune emerges from Erik Satie-like minimalist chords, picking up intensity as it moves along.  By the 5-minute mark (the tune runs 13:34), Werner becomes ruminative once more. One hears traces of Chick Corea's "Children's Songs" as the pianist follows his instincts.  Werner is nothing if not playful - he maneuvers through John Coltrane's "Giant Steps" with ease, playing with the tempo, building one part of his solo on ascending chords and single-note runs that go high to low. (His vocal reactions throughout the program range from grunts to surprised laughs as if he is surprising himself.)

He goes back to Joni Mitchell's "Songs to a Seagull" Lp (her 1968 debut) for the stunning "I Had a King" (there are moments I believe Werner is whistling along with the melody line)  - his solo captures Ms. Mitchell's emotionally mature vocal and then spins his own musical story.  Even as his most forceful, there is a grace to Werner's melodic excursions.  How he caresses Thad Jones' touching "A Child Is Born", imbuing the performance with a childlike innocence (befitting the melody), seemingly moving up into the stars before returning to earth (and the melody) with full chords followed by more heavenly figures (and the whistling).  Combined with the Joni Mitchell song, these 2 pieces are a stunning example of how music can stir memories and emotions that resonate long after the piano notes decay.

"Me, Myself & I" may not reveal anything about Kenny Werner listeners did not already know;  his melodic flair, adventurous solos, and intelligent arrangements can be heard on his numerous recordings.  But, this solo music also displays, at different times in the program, a generous amount of soul. Yes, generous as well as moving - isn't that why many of us listen to music? To be moved.  This music does just that, and should be heard.  For more information, go to www.kennywerner.com.
are on vie