Talking to Each Other and To the Listener 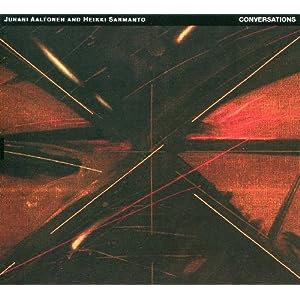 Juhani Aaltonen (tenor saxophone) and Heikki Sarmanto (piano) have been friends and musical collaborators for nearly 5 decades, first playing together in 1964.  Before that, they were both listening to American jazz on record and in person in their native Finland, influenced by the European tours of the John Coltrane band with Eric Dolphy, Elvin Jones, McCoy Tyner and Reggie Workman. Over the years, they played in ensembles large and small, classical and jazz.

One can feel their comfort level and hear their friendship on "Conversations" (TUM Records), a 2-CD set that combines Sarmanto's compositions, several on-the-spot improvisations and 2 standards from the team of Arthur Schwartz and Howard Dietz.  Perhaps the most impressive aspect of this music is one can not easily tell the difference between the "composed" works and the improvised pieces. The program is heavy with ballads but none are ponderous - this is music that pulls one in and allows to get lost in the interplay.

Pieces like "Evening Prayer" unfold slowly, with the deliberate saxophone lines framed by the raindrop-like quality of the piano notes.  Sometimes the song starts in a quite mode and then begins to move in fascinating directions.  The improvised "...It Happened Today" opens like a haiku yet, before too long, the duo catches fire and the listener is pulled into their hearty interplay.  There are several moments when one can hear the influence of McCoy Tyner on Sarmanto; yet he also has an impressionistic side that blends sustained, soft, notes with silence.

The first 3 tracks on CD 2 are like a thick novel with many plots, wondrous twists and turns.  "From Nothing" and "No Work Bound Me" are inspired by the work of American-born poet Rika Lesser, with the former piece are forceful ballad that has a rich melody line wonderful support from Sarmanto.  The pianist displays a fine range of emotions and styles on the second piece, his articulated lines weaving in and around the the more declaratory tenor.  Meanwhile, "Free Souls" is a powerful improvisation, with Tyner-esque chords and runs from the piano and often fiery lines from Aaltonen alternating with more conversational phrases.

There is lot to digest in these "Conversations", much more than a listener would want to take in in one sitting.  Spend some serious time with these songs, allow them to soak into your mind and being - chances are good you will be moved by the experience, moved in a positive way.  For more information, go to www.tumrecords.com.

Israeli-born pianist Ehud Asherie teams up with tenor saxophonist Harry Allen for an 11-pack of standards, most, if not all composed before either player  was born.  "Upper West Side", the second CD the duo has recorded for Posi-Tone Records;  they worked with a rhythm section on 2010's "Modern Life."  If you have only heard Asherie as a organ player, you should be impressed by his formidable piano work.  There are moments when his left hand has the power associated with "Jelly Roll" Morton or Art Tatum (listen to him fly on ("I Want To Be Happy")  and one can hear a healthy dollop of Teddy Wilson.  At times, a touch formal but he can be quite playful  (i.e. his "Spanish tinge" on Jobim and Silva's "O Pato.")  As for Allen, he's the perfect foil with his breathy Ben Webster tone and calm demeanor, bluesy smears and airy high notes. He dances his way through his solo on "Learning The Blues" bouncing over the rumbling piano bass and trilling high notes.   His "old world" charm works just fine on "Our Love Is Here To Stay" and does he ever caress Billy Strayhorn's "Passion Flower" (with more than a hint of Johnny Hodges in his approach.)

"Upper West Side" is a positive experience from beginning to end. By returning to the blues roots of 1930's piano jazz, Ehud Asherie shows his continuing maturity as a player - his playing throughout command's one attention.  Harry Allen makes no bones about his roots or "throwback" tenor style.  He also loves melody and his solos are often quite hummable.  Together, they sound as if they are having the best of times; the listener should laugh, sing along and tap his/her feet.  What depression?  This music will drive your "blues" right out of the house.  To find out more, go to www.posi-tone.com.