Drummer-composer Harris Eisenstadt brings his wonderfully musical quintet Canada Day to Firehouse 12 in New Haven this coming Friday December 9.  The group, featuring Wesleyan graduates Chris Dingman (vibraphone) and Matt Bauder (saxophones) as well as Nate Wooley (trumpet) and Garth Stevenson (bass), makes music that blends handsome melodies with impressive improvisations.  And, how Eisenstadt and bassist Stevenson (the 2 Canadians in the group) interact with the soloists gives the music a conversational quality - in other words, no one is out there just to show off his impressive technique.  Some of the material can have a "thornier" edge while other pieces are more ethereal but the music is never mundane.

The group has 2 CDs, the latest "Canada Day 2" released by Songlines Recordings (a label based in Canada - naturally!) and are now working on its 3rd recording, adding 3 members to create an octet.  But, it's back to 5 for the Firehouse gig.  Canada Day will play 2 sets, 8:30 and 10 p.m.  For ticket information, go to firehouse12.com or call 203-785-0468.  To find out more about Harris Eisenstadt, go to www.harriseisenstadt.com. 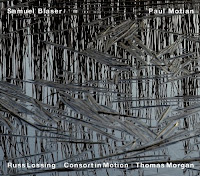 My wife is fond of reminding me to clean the desk every chance she gets and I am remiss in most instances.  But I took her suggestion on Thanksgiving Day and, lo and behold, we discovered this Samuel Blaser CD I had misplaced several months ago.  "Consort in Motion" (Kind of Blue) features the Swiss-born trombonist rearranging works by Claudio Monteverdi, Girolamo Frescobaldi, and Biagio Marini, Italian composers born in the 16th Century and who wrote well into the 17th Century (Marini died in 1663 while the other two both passed in 1643.) Blaser re-imagines 10 works for a quartet featuring Russ Lossing (piano), Thomas Morgan (bass) and Paul Motian (drums) - no mention in the notes if the title is a play on the drummer's name.

The casual listener, not confronted with the concept of this music, might find this a charming and somewhat moody collection of jazz improvisations.  But, dig deeper and hear how Blaser takes the themes and allows them to move in new directions.  The lovely "Lamento della Ninfa" that opens the program sets the tone (one of thoughtful experimentation) with the melody line given a gentle ride, though the first "voice" you hear is a simple drum pattern.   And this music can go outward - listen as Blaser and Motian engage in a lively conversation during parts of "Si Dolce e l'Tormento."  The drummer rarely if ever pulled punches and he really pushes his cohorts here. The trombonist reads the theme using multi-phonics while Lossing responds with an impressionistic solo sojourn.  Morgan is the glue on this CD, holding down the bottom and adding his full tone to melodic counterpoint.  Pay attention to the way he moves through "Balletto Secondo - Retirata", his probing bass lines pushing against Lossing; then Blaser rises over the rhythm section, initially with the melody then with his solo.  "Ritornello" is offered twice. The first, and longer, version has an abstract feel in how Blaser and Lossing play the theme section but, underneath them, Motian is a subtle "swinger" and Morgan a slow "walker."  Version #2 is a lovely ballad, much closer to the original, played by just the trombonist and bassist.

So much goes on in this music that one should take his or her time to allow to sink into the mind.  While the pieces have many quiet moments, there is an intensity of creativity that imbues each track.  Messrs. Blaser, Motian, Morgan and Lossing all make cogent statements throughout and always serve the arrangements with a heady mixture of respect and joy.  To find out more, go to www.samuelblaser.com.

Speaking of Paul Motian, the crew at Destination Out has added its voices to the many tributes to the late drummer.  They also post several hard-to-get musical pieces.  Take a look and listen at destination-out.com.
Posted by Richard B. Kamins at 12:28 AM