Catching Fire in the Firehouse + CD Picks by CT Musicians That's saxophonist Jeff Lederer and drummer Matt Wilson on the left - both gentlemen will be in New Haven on Friday night (11/18) as Lederer's Sunwatcher quartet performs 2 sets at Firehouse 12, 45 Crown Street. Joining them will be bassist Avery Sharpe and pianist Jamie Saft, playing a program described as a "love letter to Albert Ayler.  Lederer, a native of Los Angeles, California, is a long-time member of Wilson's Quartet.  He's a fiery player (not unlike Ayler) who doubles on clarinet and writes songs that stretch time and melodies that burn with intensity as do the solos that follow.  He's recorded 4 CDs with his wife, the vocalist Mary LaRose, that combine folk, jazz and world music influences plus he leads Shakers 'n' Bakers, a group whose repertoire comes from the ecstatic music of the Shaker religious sect.  Lederer is an educator and has also created an arrangement of Vivaldi's "Four Seasons" for chamber orchestra and Salsa band(!)

I expect that performance space/recording studio is going rock when Sunwatcher hits the stage.  The first set begins at 8:30 p.m. with the second at 10.  For tickets, call 203-785-0468 or go to firehouse12.com.  To learn more about Jeff Lederer and his music, go to www.littleimusic.com. 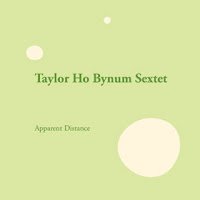 Firehouse 12 is also excited about its latest CD release, "Apparent Distance" by the Taylor Ho Bynum Sextet.  Cornetist Bynum created the 43-minute long 4-part Suite with support from Chamber Music America New Jazz Works and the Doris Duke Charitable Foundation.  Recorded at the Firehouse in New Haven (where Bynum now resides with his wife, the dancer/choreographer/teacher Rachel Bernsen), the music is, at turns, bluesy, hard-edged, "in-the-pocket", conversational, raucous and exciting.  Written for his "working" sextet of Bill Lowe (bass trombone), Jim Hobbs (alto saxophone), Mary Halvorson (electric guitar), Ken Filiano (bass) and long-time friend Tomas Fujiwara, the "Suite" opens with "Shift"; Bynum starts the piece with one of his signature statements, moving rapidly through phrases, stopping short to smear notes or squeal like a teapot. Lowe and Hobbs join in for a 3-part discussion that is ballad-like in structure that leads directly into "Strike", a rapid-motion rhythmic piece built off the propulsive drumming of Fujiwara, the pulsating bass of Filiano and the furious strumming of Halvorson. Hobbs, Bynum's cohort in The Fully Celebrated Orchestra, takes the first solo, building to a hyper-climax.  Everyone stops for Bill Lowe's tuba solo, a growling, multi-phonics filled, statement that allows Filaino's bowed bass to join in with the sax and cornet quietly keening in the background. The longest section (at nearly 21 minutes), "Source" opens with an understated guitar solo before Bynum steps up and joins Halvorson in a dialog. Later in the piece, Hobbs' alto solo ignites the rhythm section into creating a fiery conversation.  The final section, "Layer", moves through various sonic landscapes, ending in a funereal march led by highly amplified and distorted guitar lines and martial drumming.

I was lucky enough to see and hear the Bynum Sextet play this music several times before they committed it to CD.  Though much of it notated, there's room for the musicians to "speak their piece" within the framework of the composition.  "Apparent Distance" is Taylor Ho Bynum's most complete work; his influences (Bill Dixon, Anthony Braxton, Lester Bowie) have been absorbed and what the listener hears is fresh, exciting and forward-looking.  To find out more, go to taylorhobynum.com.

Over the past decade, I have heard a lot about and read even more about the Curtis Brothers. The Hartford, Connecticut, natives have been turning heads since their teenage years and time spent at Jackie McLean's Artist Collective and the Greater Hartford Academy of the Performing Arts. Their 2009 recording, "Blood.Spirit.Land.Water.Freedom", displayed pianist Zaccai's burgeoning composing talent and ability to infuse the pieces with both jazz and contemporary Latin influences.  Bassist Luques has worked with a slew of jazz artists, from Gary Burton to Dave Valentin to Christian Scott as well as trumpeter Brian Lynch, saxophonist Donald Harrison and drummer Ralph Peterson.

The latter 3 appear on "Completion of Proof" (Truth Revolution Records), the Brothers' 3rd CD and most fully realized program. Zaccai composed and arranged the entire album and it's his propulsive piano mixed with Luques' rock-solid bass lines and Peterson's highly-active drumming that is the heart of this music. The majority of the pieces are up-tempo, replete with strong melodies and arrangement that allow each soloist to dig in. It's Lynch one hears first on the opening track, "Protestor", and he works well against the rhythmic tidal wave beneath him.  Alto saxophonist Harrison actually stokes the fire higher and one can hear Peterson react with his "conversational" drums.  Zaccai goes next and he, too, spars with Peterson - the results are exhilarating.  The mid-section of the CD is dedicated to the 3-part "Manifest Destiny Suite" - joining the rhythm section and Lynch are alto saxophonist Joe Ford, tenor saxophonist Jimmy Greene, bata player Pedro Martinez (2 tracks) and percussionist Rogerio Boccato (1 track).  This is not music for the faint of heart.  "The Wrath" builds off the strong percussion and McCoy Tyner-like chords to include strong solos and great interaction. "Mass Manipulation" is more thoughtful, Lynch's lyrical lines over the cascading saxophones, rippling piano, the counterpoint from the bass and shimmering percussion.  Here, the arrangement has the saxophones playing echoing lines that lead into Greene's forceful statement and a strong bass solo. The title track blends Latin rhythms, be-bop horn lines and hard-bop drive into a heady plunge into the politics of occupation.  Zaccai's piano solo is a dazzling blend of rapid-single note runs that push Peterson into driving even harder.  "Sol Within" starts softly but gets louder on the strength of Reinaldo De Jesus pushing the tempo on the Barriles de Bomba (drums made from the wood of rum barrels.)  Lynch and Zaccai both take fine solos, the latter creating an exciting interaction with the drummers.


One can clearly hear on "Completion of Proof" that The Curtis Brothers are not only carrying on the jazz tradition but adding fresh ideas into the ongoing fusion that is jazz.  They take no shortcuts but play with vigor, honesty and the purest of intentions - creating a better world through musical interactions. To find out more, go to curtisbrothersmusic.com.
Posted by Richard B. Kamins at 9:21 AM