Rare Concert + Reviews of Music by 1 Duo, 2 Trios and a Quartet

If you are a person who appreciates musicians that can create works informed by gospel music, by classical music, by blues, by jazz and free improvisation, then do not miss the pianist/organist/vocalist/composer Amina Claudine Myers Trio Friday September 30 at Firehouse 12, 45 Crown Street in New Haven.   Ms. Myers first came to critical notice in the early 1960s when she moved to Chicago and played in the bands of hard-bop greats Sonny Stitt and Gene Aamons.  After meeting pianist/composer Muhal Richard Abrams, she joined the AACM (Association for the Advancement of Creative Musicians) and began developing her own music.  Her 1980 recording, "Amina Claudine Myers Salutes Bessie Smith" (Leo Records), remains one of her finest works. She's performed and recorded with Lester Bowie (his "The 5TH Power" release on Black Saint is also a stunner), Charlie Haden, the Art Ensemble of Chicago, David Murray and many others.

Joining her in the recording studio/performance space will be acoustic bass guitarist Jerome Harris and drummer Reggie Nicholson, both impressive musicians. They'll play 2 sets, 8:30 and 10 p.m.  For more information, go to firehouse12.com or call 203-785-0468.

We reviewers are supposed to be a hearty crowd and low-key appreciators of the jazz world but my wife came running when I shouted "O my!  What a treat!"  No, not food nor a paycheck but this splendid duo CD from pianist Joel Forrester and soprano saxophonist Phillip Johnston.  "Live at the Hillside Club" (Asynchronous Records" features 12 delightful tracks recorded in the Berkeley, California, arts venue.  Messrs Forrester and Johnson were on tour promoting a new CD by their long-running Microscopic Septet.  They have been friends and collaborators since 1974 - even though the Micros broke up for 15 or so years and Johnston moved to Australia, the band's music never went out of favor (some critics always "keep the faith.")

They first met when Johnston heard Forrester playing a Thelonious Monk and it was musical love at first hearing. The CD contains 4 Monk tunes, 7 by Forrester and "Splat", a solo piece by Johnston.  There are many "sweet" moments including the lovely and blues-drenched "Pannonica" and "Your Little Dog", a heart-felt tribute to a family pet.  Johnston's soprano playing is often sublime (never moreso than on "Did You Ever Want to Cry?") yet he "swings" congenially on "Well You Needn't."  Forrester's piano work is informed by Monk but he's no imitator plus he's got a "huge" left hand - when he hits the "stride" on "Evidence", the room vibrates.

Even if you've never sprung for a Microscopic Septet recording (infidel!!), "Live at the Hillside Club" is...well.. it's a treat (and low in calories as well.)  To find out more, go to www.joelforrester.com and/or www.phillipjohnston.com.

The trio of Jean Michel Pilc (piano), Francois Moutin (bass) and Ari Hoenig (drums) have been a working unit for 15 years and, in modern jazz terms, that's a lifetime.  When they got together in March of 2011 to record "Threedom" (Motéma Music), they literally walked into Peter Karl Studios, sat down and played.  No set list and no original pieces by band members - of the 18 tracks, 9 are group improvisations and the other half are either "popular" standards or jazz standards.

As a listener, I approached the CD in a similar fashion.  I did not look at the tracks listing (until I got surprised by funky take of "Giant Steps" followed by the sweetly abstract take of "Afro Blue"), just popped the CD into the player and let it flow.  You should do the same.  While there is much here to like, the average listener probably won't sit still to take in the entirety of this exceptional program.  In his own way, Hoenig puts on a clinic - his work is splendid, from the intermittent rubbing brushes on both "Birth" and  "Lily" to the snapping snare work on "I'm Beginning to See the Light" to the conversational high-hat on "Slow." In many trio settings, the bass and drums alternate being the bottom -  that happens here at times but Moutin is ever-so-musical throughout the program.  Pilc shines as well with his post-bop flourishes on "Confirmation" or his mysterious abstractions on "You and the Night and the Music."  His playing on "Birth" shows the influence of Erik Satie; no wasted notes, no added single-note dashes, just a piece filled with wonder (the mood actually carries over to the next track, "Slow."

A similar spirit inhabits "Hearts Wide Open" (Le Chant du Monde Records), the new CD from Israeli-born guitarist Gilad Hekselman.  While the guitarist penned all the tunes, one can hear that the music is played by a band that knows each other well and plays to each other's strengths.  With a rhythm section of Joe Martin (bass) and Marcus Gilmore (drums), Hekselman has the freedom to move in any direction he chooses.  Add the tenor saxophone of Mark Turner (on 4 tracks) and the music soars even higher.  I like what the soloists do but it's the work of Martin and Gilmore that shines.  The movement that Gilmore creates really pushes the guitarist on the uptempo pieces.  Listen to their musical conversation on "One More Song", how Hekselman continues to rise up over the insistent drums. And pay attention to Martin; he not only supports the other players but adds his own counterpoint to the piece.  The quartet eases into "Brooze", a "modern blues piece with a strong melody, sparse but fitting guitar chords and forceful drumming.  Turner's tenor is often in the higher registers and he ambles through his solo yet provides enough fire to incite the guitarist's solo.  Martin and Gilmore lock down the slippery beat on "The Bucket Kicker", giving Hekselman the freedom to follow his melodic whims through a solo that displays fire and wit. The quiet elegance of "Will You Let It?", with its folk-like melody, is a showcase for Gilmore's explosive drum work - he does not overwhelm the piece but gives the piece an appealing edginess.

When you return to "Hearts Wide Open" a second and third time, concentrate on the melodic richness.  Just about every track has a strong theme and the fine rhythm section helps to make each piece stand out.  Yes, the group can (and does) improvise impressively but the brilliance and ultimate success of the CD lies in the fine musical architecture Gilad Hekselman creates.  To find out more, go to www.giladhekselman.com.  To hear the group (sans Mark Turner) in action, go to www.npr.org/2011/09/19/140607358/gilad-hekselman-wide-open-reaction. The CD is scheduled to be released in October of this year. 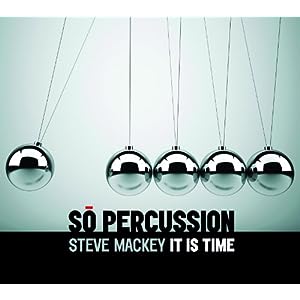 Speaking of fun, Sō Percussion has just the most delightful time creating the various sounds on "It Is Time" (Canteloupe Music).  The quartet - Eric Beach, Josh Quillen, Adam Sliwinski, and Jason Treuting - came out of the Yale School of Music 12 years ago with a sound like no other.  Yes, the group's sound can be traced to the pioneer work of Steve Reich but they have also the mined the fertile musical veins of John Cage, Paul Lansky and David Lang. They write their own pieces as well.

Here, Steve Mackey gives Sō quite a sonic palette to play with;  everything from wine bottles to metronomes to pump organs to steel drums to alarm clocks is thrown into the mix.  Amazingly with all the toys and drums, the work never sounds cluttered. In fact, it's quite playful which is not surprising seeing as the composition was inspired by the composer's young son.  There are plenty of melodic lines to entice the most skeptical listener.  The rhythms often have an African feel but that does not permeate the music.  There is an ebb and flow to the work as well as an appealing lightness of "being." Overall, it's a very hopeful program.  There's a DVD that comes with the CD release - it, too, is fun, a bit serious but still fun.

To find out more, go to www.sopercussion.com.
Posted by Richard B. Kamins at 9:40 PM