Brass Bonanza (Part 2, including Aaron plays with 2 and 15)

The aptly-titled "Conversational Music" (self-released) is the documentation of 2 sessions that trombonist Julian Priester and drummer Aaron Alexander recorded in 2007.  The 15 tracks, most under 4 minutes (with 4 exceptions), do not immediately jump out at the listener but, if you let them seep into your consciousness, you'll find much to savor.  The elder Priester, 72 at the time of this recording, still has a lovely, full, tone and there are moments when he plays solo that take your breath away("A Rose for Beatrice ((for Bea Schott))" and "Ode to Lucius Harper").  Alexander, approximately 3 decades younger than his musical partner, never overplays or drowns out Priester. Enjoy how they "dance" together on "Wex", how they "high-step" on the energetic "Gerald Stephen" and "Bugala, Bugala" and gently amble through the pretty ballad that opens the program, "Ariella Carmen."  One can hear the influence of Klezmer music in the rhythms on several of Alexander's compositions.  There are references to other "world" musics, such as the striking (honestly, no pun intended) solo percussion piece "Cymbalinese" and the abstract "Ginggin, Bongbong" (with a touch of gamelan in the percussion as well as impressive percussive effects from the trombonist.)

"Conversational Music" is a subtle delight, the work of 2 friends who truly enjoy playing together.  The fact that they had not performed together in 15 years only adds to the palpable joy emanating from the music.  For more information, go to www.aaronalexander.com. 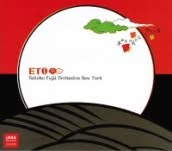 Alexander is in the drummer's seat for the latest from Satoko Fujii Orchestra New York.  Ms. Fujii, who is nothing if not prolific (2 other CDs have been released at the same time), has 4 different large ensembles, 3 based in her native Japan (Tokyo, Nagoya, and Kobe) but her New York aggregation is the one she has composed the most music for - "Eto" (Libra Music) is the 8th release from the 15 piece group.  Best I can tell, the title of the CD translate to "Ummm..." - that's a good way to describe the program in that the longest piece, the 14-part "Eto Suite", is a fairly
indescribable.

Ms. Fujii, like Duke Ellington, writes for her musicians, writes to their strengths and uses as broad a pallet as both Duke and Billy Strayhorn.  The opening track, "The North Wind and The Sun" has big sweeps in sound, from throbbing drums to whispering trumpet.  There are 6 soloists and each gets his own background - Herb Robertson (trumpet) plays over a dirge while Andy Laster (baritone saxophone) gets a section that has a quick give-and-take and a short, boppish, rhythm.  Ellery Eskelin (tenor saxophone) takes a hearty solo over Stomu Takeishi's strumming electric bass lines.  Ms. Fujii's husband, trumpeter Natsuki Tamura, takes the piece out with what sounds like a squealing teapot.  "The Eto Suite" is based on the Chinese zodiac;  there is an "Overture"and "Epilogue" and, in between, 12 short pieces, each one named after the animal in the zodiac and assigned to a soloist.  Examples include Joey Sellers (trombone) as "Ox", with a lovely melody and fine harmonies from the reeds and brass. Tamura's hissing/sputtering trumpet is "Snake" (with a Black Sabbath-like "heavy" rhythm section and forceful reeds. The alto saxophone of Briggan Krauss is "Boar" and this one shakes his head, roars, and shouts over the rampaging drums of Alexander and shouting brass.

The final 2 tracks on the program, "Pressure Cooker" and "Stroll", both contain great section writing, with the former playing the reeds off the brass while Alexander and Takeishi really push the proceedings, especially under trombonist Joe Fielder's solo. Frank London (trumpet) goes from furious to muted in the span of 30 seconds.  The latter track opens with Chris Speed (clarinet) and Herb Robertson musically chattering at each other before the rest of the group comes in on throbbing drums.  There is a handsome melody played by the reeds and brass which sounds influenced by Japanese folk music before trombonist Curtis Hasselbring takes a rambling yet forceful solo.

Ms. Fujii's piano remains in the background throughout the CD but her creativity is front and center.  Her ability to create such intense music that never blares, where each voice gets its due and where the sections have such fascinating melodic and harmonic variations to play is so impressive. Like the large ensemble writing of her contemporaries John Hollenbeck, Maria Schneider and Jim McNeely, Satoko Fujii makes music that is her own.

Listen to Jason Crane talk with Ms. Fujii and Natsuki Tamara on "The Jazz Session" by clicking here - you should also go to www.satokofujii.com to discover the many facets of her talent. 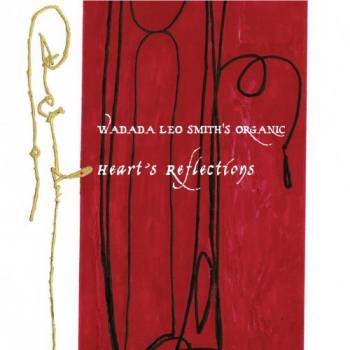 Wadada Leo Smith continues to make music that defies categories.  "Heart's Reflections" (Cuneiform Records) features a 14-member ensemble that includes 4 guitarists, 2 bassists, 2 saxophonists, piano, violin, the mighty as well as subtle percussion of Pheroan ak Laff and 2 people on laptops.  How best to describe the music?  There are long stretches of music that have the feel of Miles Davis circa "Big Fun", the sound replete with chunky rhythm guitars, funky bass lines, pounding drums, Smith's electronically distorted trumpet filling the sound spectrum and more.  But there are also pieces that move in unexpected directions, such as the 11-part title track subtitled "Splendors of Light and Purification (for Shaykh Abu-al-Hasan al-Shadhih.")  Ranging from rhythmic romps, such as "The Majestic Way" to musical meditations such "Spiritual Wayfarers", the different voices sometimes speak as distinct soloists, other times in group settings.  Most impressive are the multiple contributions of Angelica Sanchez (acoustic piano, Wurlitzer electric piano) and the creative interplay of bassists John Lindberg and Skulli Sverrisson. It is also good to hear the guitar work of producer Michael Jackson who turned many an ear when he arrived on the scene in the 1970s.

The program is book-ended with 2 long pieces, both dedicated to contemporaries of Smith who have passed on.  "Don Cherry's Electric Sonic Garden (for Don Cherry)" rides atop the hard-edged funky drumwork of ak Laff while "Leroy Jenkins's Air Steps (for Leroy Jenkins)" is a multi-sectioned work with stunning guitar work from Brandon Ross, the fiery violin playing of Stephanie Cheng Smith, and the leader truly digging into the ferocious groove laid down by ak Laff. Later in the piece, the trumpeter takes a long solo that is heartfelt and quite prayer-like.

Like Louis Armstrong, Miles Davis and Dave Douglas, Wadada Leo Smith sounds like himself in all musical situations. One can get lost is his clarion-call trumpet as well as his forays into electronics while his episodic compositions and intelligent arrangements offer much to the listener who desires a challenge - yet there are also moments that soothe and careess the ears.  To find out more, go to www.wadadaleosmith.com.
Posted by Richard B. Kamins at 10:01 PM