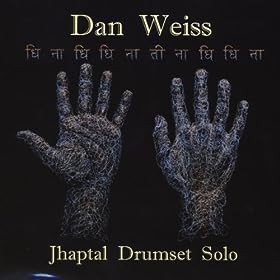 Percussionist Dan Weiss, who has performed and/or recorded with saxophonist David Binney, guitarist Rez Abbasi, saxophonist Rudresh Mahanthappa and bassist Eivind Opsvik (to name but 4), not only has mastered the trap set but also the tabla drums.  For his second set of compositions for drumset, "Jhaptal Drumset Solo" (Chhandayan Publication), Weiss again enlists guitarist Miles Okazaki to play the repeated melody line (in the style of the Indian tamboura but a melodic drone not one tone) while he plays the 36 different pieces for tabla on his drums.  The project will be of great interest to drummers and less so to the average listener.  I find it quite peaceful (even when Weiss is really "wailing") but one really has to be "in the mood." It is fascinating how he transfers the tabla lines to the snare and the subtle shifts in the rhythmic patterns.  For more information, go to www.danweiss.net.

Though the covers bear a similarity and the music features an excellent drummer (in this instance Obed Calvaire), the new CD by trumpeter-composer Sean Jones, "No Need For Words" (Mack Avenue) is contemporary music strong on interplay, melodic variations and excitement.  With a core band of Calvaire, Orrin Evans (piano, electronic keys), Brian Hogans (alto saxophone, electronics) and Luques Curtis (bass), Jones continues to move forward.  "Look and See" opens the program in a high-powered fashion with Calvaire really pushing the tempo. His accents have a hard edge and he's not afraid to crack down hard on his snare.  Evans is stalwart throughout, whether negotiating his way through the hard-bop rhythms of "Touch and Go", opening the pretty ballad "Momma" with a gospel-tinged unaccompanied statement or creating a keyboard maelstrom on "Love's Fury."  The last piece would be out of place on a Living Colour CD, with its noisy background and Calvaire's percussive onslaught (guest guitarist Matt Stevens adds "wailing" sounds to the tune while percussionist Kahlil Kwame Bell stokes the percussive fire.)  Jones' mellow muted trumpet adds a mellow "midnight" touch to the title track, a fairly quiet homage to a romantic liaison.  Evans' light touch, the solo that grows from just a few well-placed notes, and fine background work that supplies Jones and Hogan with an easy cushion, is delicious to hear.  The final track, "Forgiveness (Release)", also has a gospel feel, amplified here by the presence of Corey Henry's Hammond organ. Hogans' solo is short but very emotionally powerful and, when he and Jones rise high above the insistent rhythm section in the last several minutes of the piece, the listener is carried away by their musical testimony.  The quiet coda brings the program to a most satisfying close.

"No Need For Words" is Sean Jones' 6th CD as a leader and one can truly hear how he has developed as a composer, arranger and bandleader. From his debut in 2004, one could tell he was a very good musician but his growth has been impressive. This CD is audible proof of that - to find out more, go to www.seanjonesmusic.com. 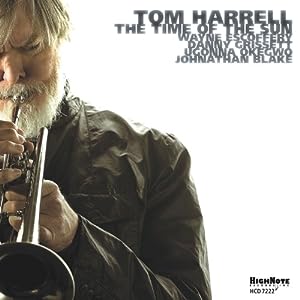 Tom Harrell is well into his 5th decade as a performer, having graduated from Stamford University in 1969 to step right into the Stan Kenton Band. He is not only a fine musician but also an excellent (and, somewhat, underrated) composer.  He has led a big band, composed music for trumpet and piano and created symphonic arrangements for vocalist Elizabeth Kontomanou. His growing discography has many strong entries.

Since 2006, he has led a quintet featuring Wayne Escoffery (tenor saxophone), Danny Grissett (piano, Fender Rhodes), Ugonna Okegwo (bass) and the human dynamo that is Johnathan Blake (drums). "The Time of the Sun" (HighNote) is the group's 4th CD and it's as good as the previous 3.  Why?  First and foremost, this is a working group, one that Harrell knows extremely well and writes to their individual strengths.  Escoffery, who is also listed as one of the producers, adds heft and fire to the sound, playing off the more mellow edges of the leader.  Listen to him wail above Blake and Grissett's burbling Rhodes on "Ridin'" - he follows a long, rather fiery, solo from Harrell (who really has a great time riding the percussive tidal wave), starting slowly, then really digging in to the groove. "Estuary"is another in a series of lovely melodies that Harrell dresses in mellow Brazilian rhythmic patterns.  Grissett's spare embellishments beneath the solo opens up during his spot with handsome single-note runs that rise like mist off a lake. Escoffery's solo is, understandably, a bit stronger yet the way he moves into the higher register of the tenor without force is a treat. Blake creates a "modern" groove for the riff-driven "Dream Text", a piece that has a melody line that resembles some by the Becker-Fagen duo aka Steely Dan. Grissett's Rhodes' chords emphasize the Dan connection but, pay attention to the fine flugelhorn solo because it's one of Harrell's best on record. Throughout the CD, Ugonna Okegwo is the unsung hero as he really holds the beat down and allows Blake to embellish what the soloists are creating.

Tom Harrell, like Wayne Shorter, Charles Lloyd, and Herbie Hancock, is both a fine composer and strong soloist. Like those 3 modern "masters", he is not a slave to any one style so his music always sounds fresh.  The 65-year old Harrell surrounds himself with younger players (bassist Okegwo turns 50 next year while the others are only in their mid-50s), musicians who are leaders as well and who are dedicated making this music come alive.  And, believe me, it truly does. (I almost forgot to mention the solar "sounds" that open the CD - very interesting way to set the sonic table.) To find out more, go to www.tomharrell.com.
Posted by Richard B. Kamins at 6:59 PM