There seems to be another backlog of review copies on my desk - not complaining, just need to sit down and tell you about them.  I'm trying something different this time in that I'm using a rating system. In honor of Spring Training and the upcoming baseball season, underneath the review, you'll see single, double, triple or home run - I'm too nice a reviewer to accuse someone of striking out (though people tell me I can be "too kind.") 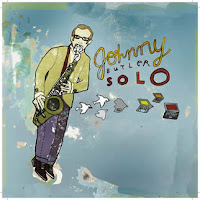 Solo - Johnny Butler (Johnny Butler Jazz) - Don't much about Mr. Butler or his music (he plays with an electric 5-some known as Scurvy) is a fascinating experience. One saxophone and a looping system, this EP (just over 24 minutes) was recorded live without overdubs in various studios and 1 track from NYC's Otto's Shrunked Head Tiki Bar & Lounge.
The 4 tracks range from an elegiac work (the long soft tones of "Cathedral") to gospel-tinged ("Katrina", which features a melodic fragment that sounds like "Cool, Cool Water") to the rhythmical and sonic  experiment that is "Glitch" to the mournful "Eulogy" (composed after George W. Bush's re-election, written for a fallen soldier that the composer did not know but had read about in the paper.) The last piece is reminiscent of Joe Zawinul's "In A Silent Way" in its long, contemplative, phrases.  This music works because Butler doesn't try to overwhelm the listener with too much sound.  The melodies are well-drawn - even the funky "Glitch", with its riff-driven structure, has a satisfying circular melody line. Rating: triple (points for audacity and invention.)
To find out more about this man and his music, go to www.johnnybutler.com.

Curiosity - John Vanore & Abstract Truth (Acoustical Concepts) - Here's an interesting that's been sitting unreleased for 19 years.  Trumpeter/composer/arranger Vanore, based in Philadelphia and an alumnus of the Woody Herman Band, created a book for a 13-piece band including 5 trumpets, 2 trombones, a french horn, 2 saxophones, piano, bass and drums.  The title track literally burst out of the speakers, flying atop Joe Nero's flashy, splashy, drum work. The ensemble takes its name from Oliver Nelson's most famous Impulse recording, not so bluesy as mainstream.  He composes strong melodies, the boppish "Misdemeanor" with its Latin influences as well as the lovely ballad, "Return", arranged for a quartet of muted trumpet (Vanore), piano, bass and drums.  Frank Foster's pretty "Simone" shows off the intelligent brass arrangement and features a hearty tenor sax solo from Mike Falcone, who also contributed the McCoy Tyner-like "Dream Dancing", its fine melody rising out of the saxophones. Can't forget the contributions of pianist Ron Thomas, whose solo and ensemble work is impressive.
One must assume the vagaries of the record business kept this lively session under wraps since 1991.  It will finally be released in April of this year and, if you like high-flying brass and strong arrangements, this disk will satisfy your curiosity.  Rating: triple! 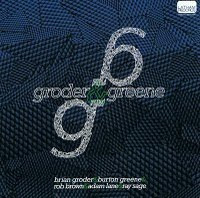 Groder & Greene - Brian Groder, Burton Greene, Rob Brown, Adam Lane, and Ray Sage (Latham Records) - Trumpeter/composer Brian Groder has played with artists such as saxophonist Billy Harper, guitarist Rez Abbasi, Joe Cocker, in house bands at clubs in Atlantic City, is in the trumpet section of the John Vanore CD reviewed above and recorded his last CD with Sam Rivers.  That 2006 release, "Torque", received great critical acclaim and deservedly so, for its rich textures, smart soloing and strong compositions. This CD is mostly "collective works", with only one composition and, due to the fine musicianship the quintet makes it work.  The pieces are fairly long (all but one over 7 minutes) yet there are relatively few moments when the energy flags.  Alto saxophonist Brown is a fine creative player, with an innate ability to blend funk and fire, melody and sound.  Bassist Lane, like the rest a strong composer, is solid here with thick tones mingling with rapid-fire riffs.  I've not heard drummer Ray Sage before but his playing is, at turns, sympathetic propulsive and fiery.  Pianist Burton Greene has been involved with "avant-garde" music since the 1960s but also plays classical, klezmer and more. His style is definitely his own, quite rhythmical, not so much harmonic as melodically fragmented. Upon initial listen, one might feel his solos meander a bit but, when you listen closer, you can tell Greene is reacting to and interacting with the other musicians. Groder has a clear tone, great attack, and solos with authority.  My issue with the program is that it's too long (75 minutes) and, while each track has something to commend it, there is too much music for one sitting (watching and hearing "instant compositions" can be different.)  To that end, this is a solid double.  For more information, go to www.briangroder.com. 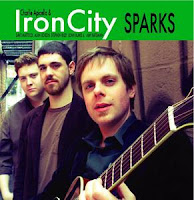 Sparks - Charlie Apicella & Iron City (CArlo Music Records) - Iron City is what one might fondly called a "bar band."  With a burbling organ, crisp guitar, funky drums, and a repertoire that mines soulful pop and jazz music, there are plenty of sparks.  Apicella's guitar work hearkens back to Grant Green, Wes Montgomery, early George Benson and he's a thoughtful, economical, soloist.  Tenor saxophonist Stephen Riley adds his smoky tenor on 5 of the 8 tracks while John Blake adds a killer violin solo to Don Covay's "Sookie, Sookie."  Amy Bateman's violin work on the original "Sweet and Sounded" is lively. There's even a sensuous romp through Michael Jackson's "Billie Jean." Yet, it's the intuitive interplay of the guitarist and Dave Mattock's B-3 organ (great foot work throughout) that gives the music its energy. Drummer Alan Korzin rounds out the group, a solid percussionist who holds down the rhythm section and doesn't push too hard.
"Sparks" is pleasing but not essential music, the sort of program that works well in a live setting but loses a bit when put on disk.  To get a taste, go to www.ironcityjazz.com.  Rating: double.
Posted by Richard B. Kamins at 10:25 AM