Saxophonist, composer, and educator Adam Larson, born in Normal, IL, now lives and works in Kansas City at the University of Missouri/KC.  After graduating from the Manhattan School of Music (Bachelor's and Master's degrees), he stayed in New York City leading his own ensembles and recording five albums for labels such as Inner Circle Music, Ropeadope Records, and on his own label. They showed him as a fine soloist and a good writer –– he also played a slew of gigs as a sideman with various leaders. 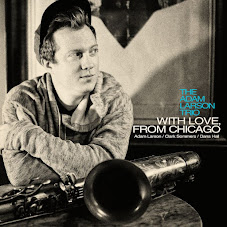 Larson makes his debut on Outside In Music leading a trio that features bassist Clark Sommers and drummer Dana Hall.  "With Love From Chicago" contains 10 pieces, three by the leader, four by bassist Sommers, and one each by Thelonious Monk, Chicago-based tenor saxophonist John Wojciechowski, and J. Russel Robinson.  What stands on initial listenings is how "tight" and "loose" the group interactions are, how delightfully melodic bassist Sommers can be, how powerful drummer Hall (plus he can swing mightily), and how comfortable the leader is being challenged by his rhythm section.  The album opens with Larson's "Angolan Babysitter" –– Hall's polyrhythmic attack pushes the saxophonist to play with abandon but make sure to listen to how Sommers bounces his melodic phrases off the drums.  Sommers' bluesy "The Time You Forgot You Knew" has a handsome melody with strong counterpoint from the composer all underpinned by the drummer's headlong push forward.

The Trio does a sprightly reading of Monk's "We See", playing with the time signature, breaking up the melody, playing with the piece ways that the composer would probably enjoy. J. Russel Robinson's "Portrait of Jenny" (a hit for the Nat "King" Cole Orchestra in 1949) is an oft-recorded standard; here, the Trio plays the tune oh-so-slowly with Hall's brushes and Sommers melodic bass lines supporting the heart-felt performance of the melody.
"With Love From Chicago" is one of those musical experiences that would sound great in a club but, thanks to engineer Ken Christianson at Pro Musica in Chicago, the music leaps out of the speakers and into the room. At times under headphones, it feels like you're in the midst of the recording studio between the drums and bass –– their music hits you in the chest.  The saxophonist responds by absorbing the "hit" and pouring its intensity into his solo forays. This is the first trio recording Adam Larson has released; his exciting thematic explorations and his powerful musicianship plus the joyful, intense, musical, rhythmical playing of Clark Sommers and Dana Hall makes one hope this is the first of many collaborations!
For more information, go to www.adamlarsonjazz.com.
Hear the opening track:
Pianist, composer, and educator Pete Malinverni, a native of Niagara Falls, New York, moved southeast to NYC in the 1980s where he is the midst of a long and very busy career. He has played alongside the last drummer Mel Lewis, saxophonists Joe Lovano and  Steve Wilson, and vocalist Karen Allyson (among others).  The pianist has issued 16 albums as a leader plus appeared on many more. He's also plays in religious settings at the Devoe Street Baptist Church in Brooklyn (Minister of Music for eighteen years), the Westchester Reform Temple in Scarsdale, NY (Pianist and Conductor) and the Pound Ridge Community Church (Director of Music. He is now the Chair of Jazz Studies at Purchase College/ State University of New York. 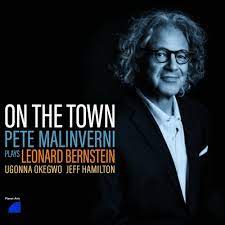 The pianist's latest album is "On The Town –– Pete Malinverni Plays the Music of Leonard Bernstein" (Planet Arts Recordings) and it's a delight from start to finish.  Malinverni first met the Maestro when the pianist had a solo gig at Bradley's in New York City and Bernstein (1918-90) walked in. Malinverni started playing the composer's "Lucky To Be Me" from the 194e4 musical "On The Town".  Bernstein was thrilled and struck up a conversation which tickled the younger musician so much. Still, it took nearly 30 years for Malinverni to play a program dedicated to the composer's music.  he did just that in 2018 as part of Bernstein's Centennial Birthday celebration for a program that featured a larger ensemble with four reeds.  For "On The Town", the pianist is playing with one of his closest associates, bassist Ugonna Okegwo, as well as drummer Jeff Hamilton.
The 10-song program features nine Bernstein piece plus Malinverni's "A Night on The Town" that closes the album.  The pianist picked songs associated with the composer's as well his own adapted home, New York City. Therefore, it should come as no surprise that the album's opener is "New York, New York" from the joyous "On The Town".  Okegwo and Hamilton swing with a purpose while Malinverni romps through the melody like a pair of sailors on shore leave.  There's a lovely version of "Somewhere" which, after the handsome solo piano opening, takes on a bluesy persona.  The happy-go-lucky feel of "I Feel Pretty" not only highlights the melody but also plays up the girlish enthusiasm of Maria who sings the tune in "West Side Story". Note the fine contrapuntal bass lines and the delightful swing of the drums.  Hamilton states the melody (and some) in the opening moments of "Cool" and then the trio romps forward.  There's a feel of Paul Desmond's feel of "Take Five" throughout the trio's rendition of "Some Other Time" (from "On The Town") and more blues in that 1944 show's heartfelt ballad "Lonely Town".
Throughout the album, one gets to bask in the glow of the sounds from pianist Pete Malinverni. Even when creating a solo, he creates melodic variations on the music of Leonard Bernstein.  The pianist's original at the end of the program may remind some listener of the trio music of Herbie Nichols but you also traces of the person Malinverni is celebrating.  "On The Town" will make you tap your feet, smile widely, and even sing along and that's very "cool".
For more information, go to www.petemalinverni.com.
Hear "New York, New York":
Braithwaite & Katz · Pete Malinverni - New York New York

Bassist and composer Luke Stewart, who splits his time between Washington, D.C. and New York City, is one of the busiest creative musicians currently catching the attention of critics and listeners around the US and the world. He leads various groups including the Exposure Quintet and is an integral member of Invisible Entanglements as well as Heroes Are Gang Leaders plus he's worked with saxophonist James Brandon Lewis, Moor Mother, and guitarist Anthony Pirog.  His latest project, Luke Stewart's Silt Trio, features drummer Chad Taylor and tenor saxophonist Brian Settles. 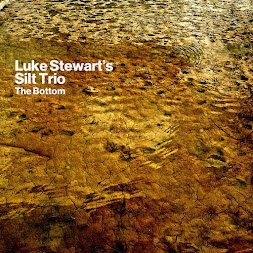 The trio's debut album, "The Bottom" (Cuneiform Records), may remind some of the work saxophonist/ flutist Henry Threadgill created with bassist Fred Hopkins and drummer Steve McCall in trio Air.  Not so much in the playing styles of the musicians but in how the trio approaches the music as a three-way conversation, how melodies arise from rhythmic patterns, and how solos develop from inside the music. The opening "Reminiscence" is hypnotic minimalism at its sweetest; built off of Taylor's repetitive pattern played on the mbira, Stewart's bass lines bounce off that pattern while Settles enters playing a melody of long tones in the higher (alto) range of his tenor.  Other pieces develop slowly, especially in the cases of "Angles" and "Circles", both group improvisation. The former tune, the longest on the program at 11:39, rises up out of a short melodic saxophone phrase which gives way to Stewart's bowed bass alongside Taylor's chattering drum. The piece moves slowly forward until it finally falls into a rhythm with less than 90 seconds to go.  "Circles" is just the opposite; a fiery romp that does not let up for a second until right it comes to a close at 3:04. 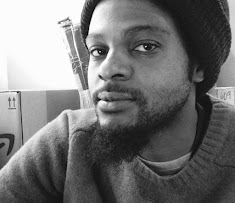 Taylor and Stewart lock in on "Roots", creating hypnotic and powerful waves of rhythm for Settles to ride atop. The driving rhythm is infectious but never overwhelms the more sublime tenor sax sounds. Yet, the performance keeps driving forward even as the music slows to its finish.
"The Bottom" closes on a bluesy "Dream House". its easy-rolling tempo created by Taylor's tap-dancing brushes.  Settles initially plays in a whimsical style (apropos of the rhythm) but opens up as his solo unwinds. Pay attention to Stewart's powerful contrapuntal lines which feed off both the sax and drums as well as his melodic solo supported by the gentle shuffling drums.
With the creation of his Silt Trio and the release of "The Bottom", bassist, composer, and conceptualist Luke Stewart shows yet another side to his ever-maturing explorations into Black Creative Music.  He approached the album as he would a live set; you should as well. Sit back, listen deeply, and enjoy the ride.
For more information, go to https://thelukestewart.com/About-1.  To hear more and to purchase the album, go to https://cuneiformrecords.bandcamp.com/album/the-bottom.
Here's a taste of "Roots": 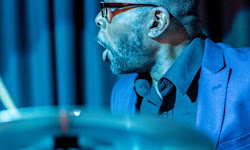 Drummer Taru Alexander is the son of tenor saxophonist Roland Alexander (1935-2006) who, thanks to his father, has been playing music since he was three years old. The younger Alexander had a slew of mentors, studying with drummers such as Walter Perkins and Andre Strobert at the age of nine. He joined his father's band at 13, studied at the La Guardia Music & Art High School with Justin DiCioccio (later of the Manhattan School of Music), and made his recording debut on Soul Note Records (at the age of 16) with the Fred Ho Afro-Asian Ensemble.  The drummer went on to play with pianist Rodney Kendrick, trumpeter Roy Hargrove, saxophonists Michael Marcus, Salim Washington, and Kenny Garrett, and many more. 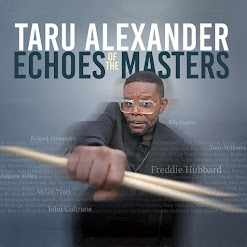 "Echoes of the Masters" (Sunnyside Records) looks to be Taru Alexander's second recording as a leader. He's organized a top-notch quartet including James Hurt (piano), Antoine Roney (tenor saxophone), Rahsaan Carter (acoustic bass), and, on one track, vocalist Hanka G.  Ms. G (who leads a quartet that features Alexander on drums) provides lyrics and her powerful voice to the Thelonious Monk/ Coleman Hawkins classic "I Mean You"; the band builds off her energetic style, pushed by the leader to create short, sweet, and succinct solos. Not surprisingly, there are two pieces by the senior Alexander including the exuberant "Change Up" that opens the six-song program and "Kojo Time" whose opening notes sound like "reveille".  The latter tune features a powerful statement from Roney pushed by the thunderous drums and Carter's splendid dancing bass lines. Hurt follows, riding the waves from beneath him to create a stunning solo.  The bassist and then the drummer solo next –– the piece never loses its steam as both players dig deeply. 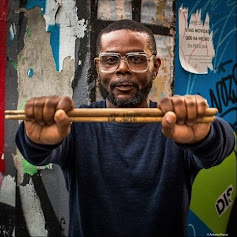 Roney shines again on the quartet's dancing take of McCoy Tyner's "Peresina", the polyrhythmic approach of the leader really pushing the soloist.  Alexander is quite active but never intrusive reminding this listener of Billy Higgins, Jeff "Tain" Watts, and Rudy Royston.  His understanding of dynamic tension shines throughout the album but none more exemplary than on the high octane drive of "Deception". From the pen of bassist Buster Williams, the rhythm section sets a furious pace and both Roney and Hurt respond positively.
Wayne Shorter's "Pinocchio" closes the program. First recorded by Miles Davis for his "Nefertiti" album, pianist Hurt opens the track with a short, introspective, solo before the rest of the band jumps in with a pace akin to "Deception".  Pay close attention to how Alexander converses with the soloists, egging them onward with his powerful, enthusiastic, percussion.
Recorded in July of 2020 (in the first full wave of the pandemic), "Echoes of the Masters" is a brave musical shout-out to the healing power of music. While the program times out at under 36 minutes, the results are quite satisfying and makes one hope that this is the beginning of a fruitful period for drummer/ bandleader Taru Alexander.
For more information, go to www.tarualexander.com.  You can listen to and purchase the album by going to https://sunnysiderecords.bandcamp.com/album/echoes-of-the-masters.
Here's "Deception" (turn it up loud!):
Richard B. Kamins at 8:24 AM