The Companionship and Intimacy of The Trio 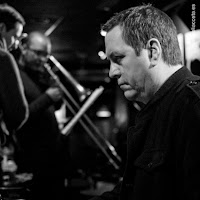 Pianist, composer, and interpreter Russ Lossing has had a fascinating career, one that now spans three + decades. He has worked with so many contemporary musicians, ranging from drummer Billy Hart to saxophonist Dave Liebman to guitarist John Abercrombie to vocalist Kendra Shank to cornetist Kirk Knuffke and beyond.  There are really good reasons for his seemingly steady employment but the most notable is that Lossing is a thoughtful and creative pianist who truly immerses himself in every musical situation and gives his all.  As a leader, he's recorded albums for Hat Art, Fresh Sounds New Talent, Clean Feed, SteepleChase Records, and Sunnyside, many in a trio setting as well as several solo recordings. 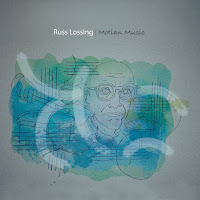 What you might not know is that, as a young man, he studied with the avant-garde composer John Cage and what I did not remember until reading the liner notes of his new recording, "Motian Music" (Sunnyside), was his long and close relationship with drummer and composer Paul Motian. The drummer would invite him up to his New York City apartment to help work on his compositions plus recorded several excellent albums as a sideman with the pianist.  This tribute is a follow-up to Lossing's 2012 solo exploration of the late Motian's music "Drum Music" (also on Sunnyside).  For the new album, Lossing works alongside his rhythm section of the past two decades, bassist Masa Kamaguchi and drummer Billy Mintz.

If you paid any attention to the music of Paul Motian since his ECM days (his debut as a leader, "Conception Vessel", came out in 1973) is that many of his pieces embraced melody and not always rhythm as one might expect of a drummer.  "Motian Music" opens with "Asia", a lovely ballad first recorded by the drummer in 1978. One can hear the influences of American folk music as well as the melodic explorations of Keith Jarrett who the drummer first started working with in 1966.  This tune stretches out easily, opening and closing with quiet solo piano.

The intimacy of the music is underscored by the fact that the trio recorded in the same room and that each piece was recorded in one take. That can only happen if there is great trust among the participants as well as an intimate knowledge of the material. Listen as the trio wends its way through "Jack of Clubs", swings heartily on "Fiasco" and "Dance", and gently moves through "Introduction" (a piece from 1985's "It Should Have Happened Here", the first trio effort by Motian, guitarist Bill Frisell, and saxophonist Joe Lovano).  Kamaguchi has a deep bass sound and a great melodic sense while Mintz plays in the tradition of Motian, never overdoing anything, at times quiet as can be, and with excellent work on the cymbals.

"Motian Music" closes with the whisper-soft "Psalm" a piece so quiet at the outset one has to lean into the speakers. Soon, you can make out a melody from the piano as the bass plays a slow counter-point. The drums and cymbals color the piece as the music floats forward. The sounds seem to hang in the air, like early morning clouds on a Spring morning awaiting the sunrise.  A glorious ending to a splendid album of music. Russ Lossing's love and respect for Paul Motian the man and composer shines through every track - the listener is the beneficiary and, honestly, in these days of uncertainty and daily unkindness, one needs this music.

For more information, go to www.russlossing.com.  (The album will be released on February 22).

Here's an uptempo track to whet your appetite

Over the course of four albums, the Joe Policastro Trio - Policastro (bass), Dave Miller (electric guitar), and Mikel Patrick Avery (drums, percussion) - has proven itsefs as adept translators of many different styles of music, from their 2013 debut where the Trio (albeit with a different guitarist and drummer) danced its way through Leonard Bernstein's "West Side Story" to its delightful interpretations of popular music that one can hear on its more recent  efforts. 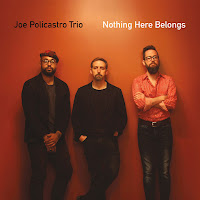 Album #4 (and the third release by the current trio since June of 2016) is "Nothing Here Belongs" (JeruJazz) - the nine-song program features six Policastro originals and three unique covers including a fascinating remake of "The Wandering Sea", first recorded in 1963 by Santo & Johnny (who are best known for 1959's "Sleep Walk").  Miller, who is also currently working with saxophonist Greg Ward's Rogue Parade, blends a country music feel into his guitar sound while Avery (whose creative music credentials include working alongside cornetist Rob Mazurek and bassist Joshua Abrams) keeps a steady, uncomplicated, yet urgent beat.

I grew up musically in the 1960s when trios such as Cream and the Jimi Hendrix Experience defined the "power trio" (in those days, that meant three musicians and a wall of Marshall amplifiers).  Over the years, I found the trios led by John Abercrombie, Jim Hall, Bill Frisell, Jeff Parker, and several others very appealing. The rhythm section is so integral to the success of the music and the lead guitarist needs to balance melodic, harmonic, and rhythmic duties.  That is also what is so appealing with the JPTrio.  Yes, the leader stands out as the chief composer here yet, without the interaction and intelligence of Miller and Avery, the music would not shine.  What the listeners get on "Nothing Here Belongs" is a band that likes to take chances without blowing your ears off. As they have done on previous recordings, the music moves from "swing" rhythms to blues to folk-influenced pieces to rock to jazz (even a touch of "surf" guitar.) The trio has no fear - they tackle Talking Heads "This Must Be The Place (Naive Melody)" and really capture the emotion inherent in the piece.  They also get "down & dirty" on the bassist's "Bloodshot" yet listen to Miller's guitar moving through various styles.   Policastro's "Plain Song" is a fascinating and handsome melody that suggests Frisell's country side with a funky touch.  Yet, there is an intensity that pushes the piece forward, especially when Miller goes into his solo.  The leader solos on most tracks - that's good because he's quite a melodic player. He also enjoys playing counterpoint to Miller on many of the tracks. Avery is so supportive; he rarely steps out but the drums are a force throughout.

The Joe Policastro Trio is blessed with a 3-day-a-week (Sunday through Tuesday) steady gig at Pops for Champagne, North State Street in Chicago.  That regular schedule (3 sets a night) allows the band to continually work on material, tighten it up, revisit older pieces, play with arrangements. "Nothing Here Belongs" is enjoyable from start-to-finish and I recommend you listen several times to understand just how good this music and the JPTrio is.

For more information, go to www.thejptrio.com.

Here's the band in the studio: