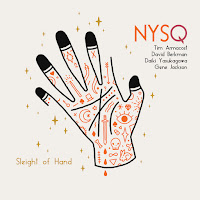 "Sleight of Hand" is the sixth album from the New York Standards Quartet (NYSQ), a quartet formed in 2006 by David Berkman (piano), Tim Armacost (tenor and soprano saxophones), and Gene Jackson (drums).  For this CD, their third for Whirlwind Recordings, they welcome back bassist Daiki Yasukagawa for his third album with the band.

As the group's name implies, most of their material comes from either the Great American Songbook or from classic jazz composers, such as Thelonious Monk, Duke Ellington, or Hank Mobley (all of whom are represented on this album).  And, as they have done on all their recording and on their numerous gigs (in the United States, Europe, and Asia), these musicians approach the songs with fresh ears and ideas.

NYSQ loves to swing. "Soul Eyes" (Mal Waldron) jumps from the get-go, Armacost's tenor leading the way.  Check out the rhythm section - they are cooking up as storm with Jackson leading the way, Yasukagawa laying down a stunning walking bass line, and Berkman providing the percussive chords in the background.  After the tenor reaches the end of his improvisational journey, the pianist takes his own joyful romp over the active rhythm section.  The pianist imparts a "rent party" feel to his short but sweet opening to Monk's "Ask Me Now."  Jackson plays with the rhythms, giving them a bit more bounce while the bassist plays delightfully melodic lines beside him. Yasukagawa's muscular bass lines lead the band into Mobley's "This I Dig Of You" - when the rest of the group jumps, the piece takes off in a big hurry with a powerful swing and smart musicality. There is a Charlie Parker feel to the melody line of Berkman's "Sleight of Hand" (played by both piano and tenor); it's so much fun to hear how much fun the band is having playing together.

The ballads on the program also stand out.  "In a Sentimental Mood", a piece that has, arguably, been recorded thousands of time, is emotionally strong.  The splashing cymbals and impressionistic piano support the tenor as it moves gently though the melody with just the right amount of improvised commentary at the end of lines.  Berkman paints a little darker shade of framing around Jule Styne's "I Fall In Love Too Easily" before Armacost, on soprano here, alternately dances through or caresses the melody. Halfway through the piece, Jackson and Yasukagawa kick up their heels with the piece really picking up steam. Check out the blazing version of "Lover Man" that closes the disc for a lesson on how a drummer can motivate soloists.  There is a gentle swing to "Detour Ahead" (composed in the 1940s by Herb Ellis, John Frigo, and Lou Carter), the quiet opening leading to Armacost (on tenor) reading the plaintive melody as Jackson's brushes deftly tap dance underneath.

When you listen to as much music as I do, every once in a while it's nice to be entertained.  That is exactly what the NYSQ do with the music on "Sleight of Hand" - they entertain.  The Quartet does not "dumb down" the music or resort to worn-out cliches. They don't worry about being either too simple or too complicated, too "avant-garde" or too "straight-ahead." They play and do so magnificently.  Jump in with both ears and this music will make you smile nice and wide!

For more information, go to nysq.org.  You can also check them out at www.whirlwindrecordings.com/new-york-standards-quartet-nysq/.