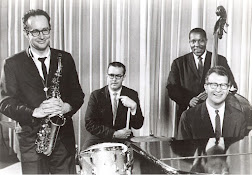 There was a time in the United States during the early years of Rock & Roll when the occasional instrumental would enter the Billboard "singles" charts.  Imagine the surprise of many radio listeners in the Spring of 1961 when "Take Five", a Paul Desmond composition from the Dave Brubeck Quartet's 1959 Columbia Records album "Time Out" leapt into the Top 40.  Pianist Brubeck, alto saxophonist Desmond, bassist Eugene Wright, and drummer Joe Morello were already traveling the world as well as experimenting with odd time signatures before they recorded "Time Out" but that was the first album that showcases the group's prowess over an entire program.   The powers-that-be at Columbia Records edited the 5-minute album track down to under three (truncating the famous drum solo) and the song, played in 5/4 time yet feeling like a waltz, became a big hit. 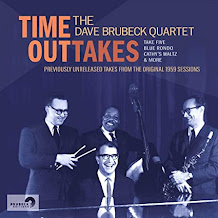 2020 is the 100th birth anniversary of Brubeck while 1961 will be the 60th anniversary of the Top 40 appearance of "Take Five."  To commemorate both milestones, the Brubeck Family has authorized the release of "Time OutTakes" (Brubeck Editions)––the eight tracks, all previously unissued, include two musical tracks not on the original album plus alternate takes of five songs that were as well as a 4-minute+ cut of "studio banter" of the group members with producer Teo Macero. The revelation here is "Take Five". Recorded at the end of the first frustrating day in the studio, the song is taken at a quicker tempo and Morello's drum solo is "heavier", neither as subtle nor melodic as the final album track recorded six days later.  The original album's other major highlight (for many) "Blue Rondo A La Turk", is not substantially different than the "final" take––the extended piano solo illustrates Dave Brubeck could play blues piano very nicely not to forget Desmond's own sweet solo over the bass and drums. 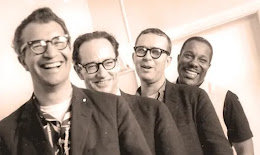 The lively Brubeck tune "I'm In a Dancing Mood" is a treat, a piece with Morello's dancing drums that the Quartet often played in person but left off the 1959 album. It's easy to hear the various time changes through the piece with the drummer often leading the way.  "Watusi Jam" is a trio piece (sans Desmond); the track features an extended drum solo, very elemental (one can really hear the African roots of drumming). If it was considered a "warm-up" for the evening recording session, this track illustrates that this group of musicians were always working on new ideas.
"Time OutTakes" serves as both a reminder of how the Dave Brubeck Quartet was one of the rare jazz ensembles to reach many different audiences and how much the four members of the group enjoyed each other's company and talents.  Historically important? Yes! Fun?  Very much so!  A welcome addition to the Brubeck discography.
For more information, go to www.davebrubeck.com/time-outtakes.
Enjoy the lively opening track:
I so rarely review "Holiday" albums but I just received a delightful recording that is spirited without being sarcastic. 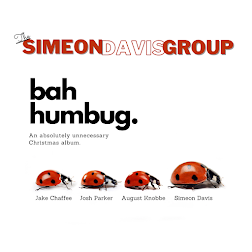 Out of nowhere.....really Denton, Texas, comes the Simeon Davis Group and its debut recording, "Bah Humbug: An Absolutely Unnecessary Christmas Album" (self-released).  Self-deprecating title aside, this is actually a delightful collection of 11 songs associated with the December holiday, many of them classics plus others from the European folk tradition.  Besides the leader on alto saxophone, the quartet includes Jake Chafee (electric and acoustic bass), August Knobbe (acoustic and electric piano), and Joshua Parker (drums).  They approach the pieces with an eye on honoring the influences including musicians such as Art Blakey, James Brown, The Bad Plus, John Coltrane, and others.  The band calls how they create the pieces as "derangements"; fair enough, but this music is hardly "crazy."  Great fun, however. 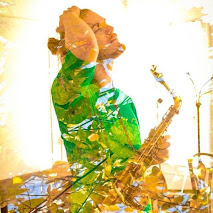 The album kicks off with a funky take of "Let It Snow" before jumping into a be-bop take of "Santa Claus Is Coming to Town."  The former has a delightful kick while the latter absolutely jumps from the get-go.  Kudos to Knobbe and the leader for their "hot" solos on "Santa Claus...".   Vocalist Rachel Azbell adds her husky alto to a "cool" reading of "God Rest Ye Merry Gentlemen".  Her pleasing scat vocal leads directly into a fine solo from Davis.  Elsewhere, we get a spicy "Deck The Halls" which has traces of the Dave Brubeck Quartet, of Sonny Rollins "St. Thomas"  as well as the Jamaican feel of Monty Alexander.  Parker's hand drumming stands out as does the delightful alto solo. The album closes with "We Wish You a Merry Christmas"––you can hear the song's English folk roots and revel how, during the body of the piece, the quartet opens the music up, playing with the tempo, the original melody, and more.

There's one track that Davis recorded two years ago with a different ensemble; "You're a Mean One, Mr. Grinch" packs quite a punch.  The lead vocal, performed by Ken Ballard (who also plays keyboards) is shadowed by Callandra Youngelson and pushed forward by the active rhythm section of
Kyle Dugger (drums) and Alex Hodge (electric bass). The combination of electric piano and the vibraphone of Destin Wernicke makes for a pleasing background.  The performance has different textures than the rest of the program yet is not out of place.
No, the Simeon Davis Group has not created the musical equivalent of a Holiday stocking full of coal. Instead, "Bah Humbug: An Absolutely Unnecessary Christmas Album" should bring a smile to those who enjoy music that takes chances by playing with tradition but does so in the spirit of creativity and fun.  A delight-filled present!
For more information and to purchase the album, go to  https://simeondavisgroup.bandcamp.com/album/bah-humbug-an-absolutely-unnecessary-christmas-album.
Here's a taste:
Posted by Richard B. Kamins at 6:10 PM