Trumpeter and composer Jason Palmer continues to go from strength to strength.  Over the past decade, he's produced 10 fine albums for Steeplechase Records with one for Whirlwind Recordings as well.  Palmer has also recorded and performed with tenor saxophonist Noah Preminger for six albums over the five years.  Last year, Giant Step Arts issued "Rhyme and Reason", a splendid quartet session with tenor saxophonist Mark Turner, drummer Kendrick Scott, and bassist Matt Brewer recorded live at The Jazz Gallery in New York City. Both Turner and Scott are longtime associates with the trumpeter having appeared on his second Steeplechase album, 2011's "Here Today." 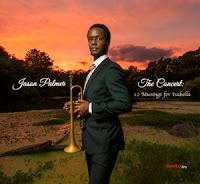 They are both back for his latest Giant Step Arts venture "The Concert: 12 Musings for Isabella"––joining them are bassist Edward Perez (who appeared on the 2011 CD) and vibraphonist Joel Ross.  The new double-CD pays tribute to 10 paintings and two pieces of ornamental art that were stolen (and have never been recovered) in the March 1990 robbery of the Isabella Stewart Gardner Museum in Boston, MA (in fact, the album was released on the 30th anniversary of the event - March 18).  For his blog, Palmer wrote an extensive piece on the program and it's well worth reading even if you do not listen to the music; of course, the writing helps even more if you listen to the pieces.  Like his previous Giant Step album, this was recorded live, this time at the Harold S. Vanderbilt Penthouse at the Intercontinental New York Barclay.

The program begins with "A Lady and Gentleman in Black" (the image to the left); everything that is impressive about the album is laid out within five minutes, from the brilliant drum to the melodic, percussive, bass lines to the crisp, clear, trumpet to the handsome, post-bop tenor sax.  The critical element, besides the excellent writing, is the Joel Ross, the sound of this vibes, how he "colors' the music, his counterpoint, interactions with Scott, and his deceptively inventive solos.  Label owner and co-photographer Jimmy Katz engineered the session and mixed it with Dave Darlington––they expertly capture the quintet's sounds so you can hear all the different voices clearly.  Only one of the 12 tracks is under eight minutes long with seven running more than 11 minutes.  Nevertheless, it's such a pleasure to hear this intelligent music that one finds listening to one disk in one sitting is hardly a chore and to both time well spent.

Listening to the skittish melody line of "The Concert" (Vermeer painting to the left) and noticing how inventive yet quiet Scott (brushes) and Perez (counterpoint) are during the long vibraphone solo is such a treat.  The slow opening section of "Landscape With an Obelisk" (painted by Govert Flinck in 1638) features a short yet delightful drum solo before the band kicks the piece into a much higher gear. "A French Imperial Eagle Finial" (one of two pieces for ornamental art) has quite the formal opening for trumpet and tenor sax but the body of the piece dances atop impressive bass playing and Scott's inventive drum playing.

While the Gardner Museum may still hope to retrieve these stolen masterpieces, this album offers the audience the opportunity to spend two hours+ in the company of five masters.  Jason Palmer was obviously inspired by these paintings to create his own musical canvasses and allow his friends to add their own touches to the works.  If you have had the privilege to hear the trumpeter in concert, you know he never relies on cliches or effects during his solos or his composing.  One could say the same about the playing of Mark Turner and Kendrick Scott plus the intelligent listening and responding of Edward Perez as well as how young Joel Ross (24) is on his way to a long creative career.  "The Concert: 12 Musings for Isabella" is a real delight!

For more information, go to www.jasonpalmermusic.com.  For his blog, go to jasonpalmerjazz.wordpress.com. 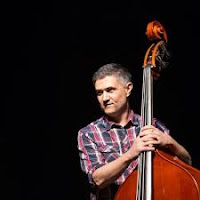 Bassist and composer Peter Slavov already had a busy career as a teenage musician in his native Bulgaria when he came to the United States and the Berklee School of music in 1998.  After graduation, he moved to New York City and within two years, was working with Joe Lovano, Quincy Jones, Kevin Mahogany, and others.  The bassist works in Lovano's Quartet and Nonet plus in US Five band. He's also recorded with saxophonists Patrick Cornelius and Uri Gurvich, pianist Alfredo Rodriguez, and drummer Francisco Mela. Slavov never seemed to have time or the inclination to create his own music; after his father (drummer Peter Slavov Senior) died in 2008, a long period of thinking, composing, and arranging began.  The recording sessions began in early 2017 and continued in its own pace until September 2019.  The results can now be heard on "Little Stories", Slavov Jr.'s self-released album and dedicated to the memory and inspiration of his father. 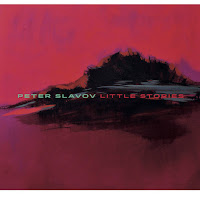 As you can see by the personnel listed below, there were a lot of people involved in bring the music to life.  Yet, the program feels organic, organized in a sensible fashion so that one can hear all the various influences on the bassist's life and career without imitation. The string quartet intro to "Gone", with the composer's bass lines as counterpoint, opens to a gentle piano melody that pushes forward on the power of the rhythm section and the delicate string arrangement; pianist Nitzan Gavrieli is the focal point and his work is delightful. John Ellis's reed presence is quite impressive on the five tracks on which he plays, none more so than "Bye", a song composed about the last time Slavov's waved goodbye to his son. It's emotional without being sappy while the interplay of Ellis (tenor sax), the bassist, pianist Gavrielli, and drummer Diego Ramirez is lovely. Mi Kim adds her wordless vocals to the Brazilian-inspired "History of Beauty" and "Ghost", her ethereal sound rising in tandem with the acoustic guitar (Marcio Philomena) and then weaving around the active bass lines on the former track. For the latter, her voice sets the mood, picked by Gavrielli's excellent piano solo (note the fine bass counterpoint and active drumming), and joining in with Ellis's alto sax.

There are many different moods on the album.  "Small Little Things" has a funky rhythm and a lively sound darkened a bit by the woody bass clarinet sounds of Mark Small. His interactions with the rhythm section are delightful. Ellis's rich tenor sounds leads the rhythm section into the bluesy "Photos", yet another tune about memories composed right after the bassist moved to the US.  The lovely, medium-tempo, ballad "A.M." features the breathy tenor sax of Matt Marantz (who creates quite a strong solo in the later part of the tune) plus more excellent piano work.

The album closes with "Elegy", a solo bass piece (with overdubbed arco and pizzicato)––composed for a friend who recently died, the music focusses on how melodic a soloist Slavov can be. The piece is not very long but still powerful....and truly hopeful and healing.

"Little Stories" is certainly not small music nor is it loud or annoying. Instead, this program, conceived and composed by Peter Slavov, soothes as much as it excites, makes one think on the stories from our own lives and how being apart from loved ones is never easy. The blend of sounds, of strings and reeds plus piano and vocals, makes for good listening any time.

For more information, go to www.peterslavov.com.