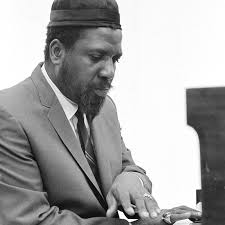 I can't claim the sobriquet "Thelonious The Onliest" for my own creation (there are numerous references to where it came from) but it is certainly a fitting description.  Thelonious Sphere Monk (1917-1982) first came to critical notice in the mid-1940s during the birth of bebop and stayed popular through the 1960s.  The native of Rocky Mount, North Carolina, created a unique style with references to the "rent party" piano of James P. Johnson, the rollicking stye of Thomas "Fats" Waller, and others but, really, nobody sounded like Monk. His splintered lines and fractured rhythms stand beside his fascinating melodies as a touchstone for pianists and other instrumentalists over the past seven decades and there is no reason to think that influence will ever dissipate. He played and recorded in many settings, from solo to trio to quartet to large ensembles yet his musical style never wavered.  Songs such as "'Round Midnight", "Mistersioso", "Crepuscule With Nellie", "Well You Needn't" and so many more, show up on set lists every night in clubs and on stages from Chicago to Shanghai, New York City to New South Wales with musicians continually trying to decode his compositions. 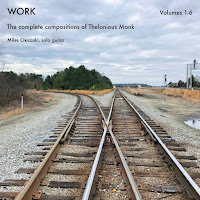 2017 was Monk's "Centennial Year" and 2018 is shaping up to be the year where artists are making recordings of Monk's oeuvre.. Before the end of December, there will be three albums on the market.  First out of the gate in mid-August was "Work: The Complete Compositions of Thelonious Monk", a solo gem from guitarist Miles Okazaki.  The guitarist, who has worked and/or recorded with Jane Monheit, Steve Coleman, and Jonathan Finlayson plus many more, started the project in early 2017 and discovered he needed to learn a slew of the songs before he recorded.  The album is only a digital form, available through Bandcamp, but Okazaki's liner notes (found on his website at www.milesokazaki.com/albums/work-2018/) tells the tale of how he came to record this project and why, what guitar he used, and about the importance of fellow guitarist Liberty Ellman in bringing this project to fruition. 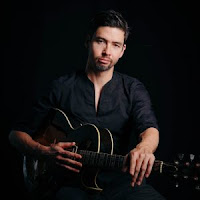 If you are a long-time fan of the man and his music, it's a delight to hear what Okazaki does with the composition.  It's important to note what he doesn't do, including any overdubbing, changing melodies or even key signatures, never utilizing different guitars, just his trusting Gibson Charlie Christian archtop guitar.  What he does do is allow the listener to soak in each and every melody as well as expose the public to less often recorded Monk tunes ("North of the Sun", "Stuffy Turkey", and "A Merrier Christmas"). There is no shortage of rhythm on the album and the guitarist's approach truly brings out the influence of the blues on Monk. Plus, dig the bossa nova influence on "Bye-Ya", the flamenco-like lines of the title track, and the emotionally strong take of "'Round Midnight."    There are moments you might think you're hearing Mary Halvorson or Howard Roberts but comparisons disappear after two or three listenings.

You can purchase "Work" as one large digital file or as six separate files of approximately 50 minutes.  Whatever you choose to do, Miles Okazaki will, at turns, charm you, make you laugh, and become wistful.  All that's there is the music of Thelonious Monk - just listen!

In the summer of 2017, pianist Frank Kimbrough was invited to perform in a Monk Centennial program to take place later that year at The Jazz Standard in New York City. He assembled a band that featured multi-reed master Scott Robinson, bassist Rufus Reid, and drummer Billy Drummond.  After the concert, a long-time friend suggested that Kimbrough and company record the entire Thelonious Monk songbook. The pianist felt it was possible and, with the help of another good friend plus the head of Sunnyside Records François Zalacain, the project was put in motion.  The band (minus Robinson) played 15 songs in April 2018 one night at Jazz at Kitano's in NYC and then 15 more the next night (with Robinson). The ensemble them headed to engineer Matt Balistaris's Maggie's Farm recording studio and, over the span of six days (May 22-24 and May 28-30), recorded 68 tunes (Kimbrough returned in June to record the two piano solos). 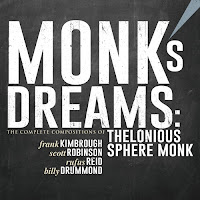 The result, to be released by Sunnyside on November 23, is titled "Monk's Dreams: The Complete Compositions of Thelonious Sphere Monk" - the album comes as an entire six-album set and each CD has a subtitle. The music is delightful throughout not just for the interactions of this fine group but also for the fact that Robinson is featured on tenor and bass saxophones, trumpet, echo cornet (a cornet with a fourth valve and a detachable second bell), bass clarinet, and contrabass sarrusophone! Once the listener gets over the sound of the lower reeds, you hear just how masterful Robinson is and how he can swing on absolutely every instrument he plays.  He even plays trumpet and tenor sax on one track ("Thelonious"). It's no gimmick - it adds to the joyous sounds emanating from the speakers.

The quartet does not mess around with the songs, no radical departures but also no rote repetition of the originals. Besides the two solo pianist pieces, there is a splendid piano-tenor sax duo on "Something In Blue" where the stride piano influence on the composer comes shining through. also, dig the bass - bass saxophone duo on "Reflections" for just how sweet both instruments sound and work together to tell Monk's story.  Kudos to all involved, from the four musicians to the excellent work of Balistaris to engineer, edit, and mix.  The sound is so fine and clear, the low notes of the contrabass sarrusophone and bass saxophone rumble in your gut, Reid's class bass work stands out, Drummond's cymbals shimmer at the sides of the spectrum, and the piano tones ringing out.

I have had the opportunity to live with this music for the past month so, listening to four or five tracks each time I sit down (more on several occasions), and, if you buy "Monk's Dreams", you'll want to do the same (even though bingeing seems to be the "in thing").  I recommend you do purchase this album (as I do with the Miles Okazaki digital album) - you'll come away with an even greater appreciation of Thelonious Monk and be blown away by the brilliant musicianship!

For more information, go to home.earthlink.net/~fkimbrough/.

I did mention that there three recordings that will be released before the close of 2018. The last one to reach the public is the work of pianist Jed Distler - go here to read more.
Posted by Richard B. Kamins at 10:26 PM