Someone asked me recently how I keep up with the all the music that he and I talk about.  I responded "I spend a lot of time in my car and, instead of listening to the news, I listen to music. When some album really catches my ear, I bring it inside, listen on better speakers, really paying attention and then, time willing, write about it."

Here are two such attentions grabbers. 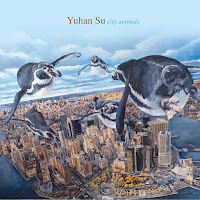 While Yuhan Su is a new name to me, "City Animals" (Sunnyside Records) is her third CD as a leader - the first two were issued o Inner Circle Music and are well worth exploring. The vibraphonist and composer came to the United States in 2008 from her native Taiwan to study at Berklee College in Boston, MA, and has lived here ever since.  Her Quintet includes Matt Holman (trumpet, flugelhorn), Alex LoRe (alto saxophone), Petros Klampanis (bass), and Nathan Ellman-Bell (drums), all of whom (save for LoRe) appeared on her 2016 disc, "A Room of One's Own."  Her music is composed with these musicians in mind and both albums sound as if the material was played live numerous times before entering the studio.

This is definitely 21st Century music.  The rhythm section is very active, pushing the music forward while one can hear elements of many different styles of music.  Ms. Su spreads the solos around but  does not say away from the spotlight.  On the aptly-titled "Feet Dance", her exciting solo, who accompanies dancers as they create their work, gives way to a powerful turn from LoRe, all the while the bass throbs and the drums bounce joyfully underneath.  The title track has a rollicking call-and-response with the vibes and alto playing a line and Holman's trumpet responds.  I am a fan on clear tone and great sense of the power of his instrument. yet, he can be gentle and highly melodic - "Tutu & D" is a prime example of that aspect of his work. His phrases move over the melodic bass counterpoint, the vibes adding color while the drums scurry and the cymbals swish in support. 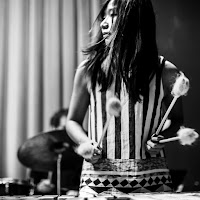 There are so many moments to enjoy on this album.  The trio of vibes, trumpet, and saxophone into to "Viaje" during which the musicians play over and under each other's lines before the bass and drums give the song its direction stands out (the duo of sax and trumpet after the theme section is powerful).  The three-part, 18 minute-plus suite "Kuafu" (inspired by a figure from Chinese mythology) moves in multiple direction over its course. Part 1, "Rising", has a powerful forward motion with equally powerful solos from LoRe, Holman, and Ms. Su.  Part II, "Starry, Starry Night", after its rubato beginning, turns into a handsome ballad (be sure to listen to the excellent bass work of Klampanis).  The last section, "Parallel Chasing", is, if possible, even more urgent than the opening movement of the Suite - here, it's Ellman-Bell's super drumming that will catch your ears on initial listening.

"City Animal" has much to offer the passionate listener.  Hard to sit still as this band kicks in and the solos stand out throughout the program. If you listen to her 2016 effort "A Room of One's Own" and then this fine album, you'll hear that Yuhan Su is not only an excellent instrumentalist but has matured into a fine composer whose music has depth, intelligence, wit, and power.  Listen closely - you should find much to enjoy!

For more information, go to www.yuhansu.com. 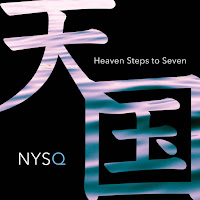 Since it's inception in 2006, NYSQ (New York Standards Quartet) has revolved the axis of David Berkman (piano), Tim Armacost (tenor saxophone, soprano saxophone), and Gene Jackson (drums). "Heaven Steps to Seven" is the group's fourth album for Whirlwind Recordings) and its first with bassist Ugonna Okwego.  The bassist has worked with the band before but has never recorded with them.  The band sees no need to change its modus operandi, its repertoire including songs from Broadway, from be-bop, post-bop, and more. What these four musicians do better than many who explore a similar milieu is to really explore, to deconstruct and reconstruct, making the most well-known pieces sound brand-new! 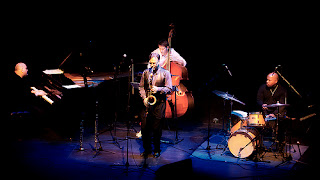 Listen to the first three tracks on this album.  They take Leonard Bernstein's "Tonight" (from "West Side Story") and caress the melody in the opening section (note Okwego's excellent bass work) - then, they kick into a higher gear still respecting the melody but pushing the heck out of the tune.  Armacost introduces "Cheryl", a classic Charlie Parker tune, and when the bas and drums, note how Jackson plays the melody as well.  When Berkman enters, the energy level kicks up another notch with the quartet seemingly reaching a climax. But, wait, it's just they step aside and make room for a delightful bass solo. Okwego then drops into a 4-note bass line and the rest of the group returns; yet now, the songs has a funky groove over which the pianist produces a rollicking solo.  "Peace", the classic Horace Silver tune, is a lovely ballad.  Notice how Jackson and Okwego play anything but in a standard manner underneath the handsome tenor and lyrical piano solos. 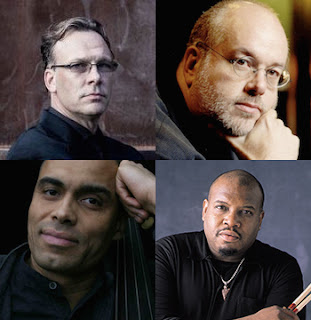 One is tempted to highlight each one of the eight tracks but, if you are a fan of NYSQ, you know to expect the unexpected.  Enjoy the artistry of Bud Powell's exquisite ballad "I'll Keep Loving You" and the pair of tunes from the pen of Cole Porter.  Every member of NYSQ is a master musician, each with a great respect for the tradition, each understanding they needn't play a piece note-for-note to show it respect but to expand on its ideas and let the listener in on the complexity as well as the enjoyment of the explorations.

If you have never heard NYSQ, you can start with "Heaven Steps to Seven" but - be warned - it'll be hard not to check out the rest of their excellent albums.  They play with great fire, with gentleness, wit, and always sound happy to be together.  Can't beat that.

For more information, go to www.nysq.org.

Here's the Quartet's splendid take of the Charlie Parker tune: