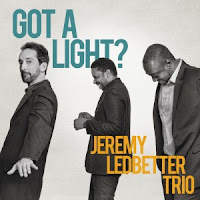 After studying in Toronto, Ontario, pianist-composer Jeremy Ledbetter spent over a decade on the road working with artists such as Mighty Sparrow, Hermeto Pascoal, Jane Bunnett, and Andy Narrell (to name but 4). He's also the longtime musical director for the calypso star David Rudder.  Ledbetter also leads the Canadian group CaneFire, one of the nation's best known Caribbean/ Latin jazz ensembles.

"Got a Light?" (ALMA Records) is his debut as a leader. With the splendid drumming of Larnell Lewis (Snarky Puppy) and the handsomely thick electric bass sound of Rich Brown, this music jumps right along. Ledbetter is a two-fisted pianist with a fine blend of percussive and melodic elements.  The nine tracks - eight originals plus the Tragically Hip's "Gift Shop" (recorded one week after the passing of the group's front man Gord Downie) - have great power thanks to the talents and big ears of the participants. 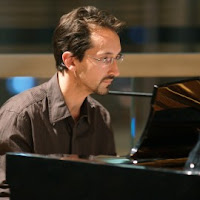 There are many different musical dishes to digest on this album.  The Latin Jazz side of Ledbetter shines brightly on several tracks including the dramatic "About Climbing Mountains".  The booming piano chords and the powerful drums move the piece forward while Brown's bass dances around.  If anything, "The Pepper Drinker" is even more startling with its quick jumps in intensity and rapid-fire rhythms.  Brown's solo is jaw-dropping yet listen to how Ledbetter and Lewis help push him forward.

There is a softer side. Vocalist Eliana Cuevas joins the trio for "Her New Wings" (the leader switching to electric piano and leads the vocals in by playing the melody on melodica). The blend of her voice with the melodica is lovely plus there is a smart use of vocal overdubs to enhance the sound.  The rhythm section sits out "Suspirito" with batá drummer Reimundo Sosa joining Ledbetter for the quiet performance.

The album closes with a solo piano piece, the gentle, gospel-infused, "The Tightrope Walker." In various places on the album, one can hear the influence of Bruce Hornsby on Ledbetter's melodic and rhythmic choices. Let this music wash over you. The Jeremy Ledbetter Trio will shake the rafters but also give you moments of peace in a crowded day.  "Got a Light?" grabs the listener from the opening note, not only because this is not your traditional piano trio but really because the music is quite enjoyable.

For more information, go to www.jeremyledbetter.com.

Take a look and listen to the Trio: 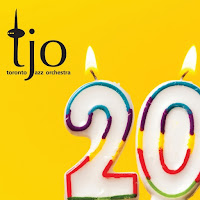 To celebrate its 20th Anniversary as a unit , the Toronto Jazz Orchestra (TJO) has issued its fourth album, the 18-piece ensemble's first release in nine years.  Led by its Artistic Director and chief composer Josh Grossman, the ensemble celebrates its existence and diversity with a eight piece program (including the four part "4 PN" dedicated to the 95-year old composer, bandleader, and clarinet player Phil Nimmons).

Grossman shows his versatility right from the start.  A sweetly melodic introduction opens to a funky/Latin groove as "Georgie and Rose" dance across the speakers. Soprano saxophonist Chris Roberts and trombonist Christian Overton step out for delightful solos powered by the delightful rhythms of drummer Ben Ball and percussionist Luis Orbegoso.  "Brad's Prudence" is a smart reworking of The Beatles' "Dear Prudence", the assemble trombones playing the melody as the trumpets and saxophones provide color commentary.

The afore-mentioned "4 PN" opens with "The Land of 2 and 4", a pleasing cut that swings along with the clarinets rising above the reeds and brass. There's a touch of Gil Evans in the smart arrangement behind the trumpet solo. Moving on to "Under a Restful Tree", the music takes on a modern feel, thanks to the adventurous drumming of Ball - note the melody played by the trumpet and clarinet in unison.  "Birdsong" follows, the trilling clarinet opening unexpectedly leading to a lovely trombone melody and a ballad presentation. The suite ends in a funky groove with "Flat 10 Strikes Again", the ensemble riding atop the delightful electric bass work of Mark Godfrey. 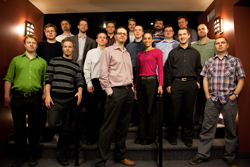 The album closes with two very different tracks.  "Reflections" is a passionate ballad that reflects the influence of Maria Schneider, especially in the section parts. "Blob", on the other hand, is a barn-burner with wailing guitar, pounding drums, and powerful solos.  It only quiets down near the end for the bass solo which gives away to a booming reprise of the opening.

Two decades - 20 years - is a good long time in the life of a modern big band.  While they may only have four albums, Josh Grossman has kept the TJO busy with several side projects.  "20" is a celebration and, hopefully, a harbinger of more to come.

For more information, go to www.thetjo.com.

Listen to Josh Grossman talk about the band and the recording: 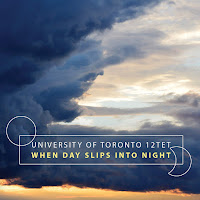 The University of Toronto 12Tet is an ensemble made of students, both undergraduate and grad students, enrolled in the university's music program. Led by trombonist, composer and arranger Terry Promane, the group plays music especially arranged and composed for the participants.  With 11 musicians and vocalist Brooklyn Bohach, the 12Tet has a new album "When Day Slips Into Night" (U of T Jazz) - the disk comes 18 months after its previous album "Trillium Falls" (my review here). The program includes a totally new lineup from the previous disk but Promane again creates an album that features standards, an original work (by current tenor saxophone John Nicholson), and a surprise in the addition of "(Ocean) Bloom", a Radiohead piece from its "The King of Limbs" album rearranged by Hans Zimmer for the BBC series "Blue Planet."

The "standards" include Juan Tizol's "Perdido", Tom Harrell's lovely "Sail Away", and Cedar Walton's boppish "Bolivia."  The musicians have a delightful time on the last tune listed, bouncing atop Evan Gratham's spongy bass lines.  Alto saxophonist Brandon Tse delivers a lively solo over the rhythm section before the reeds and brass restate the theme. Tse returns to take the tune out. The Harrell composition has a light Brazilian feel with an arrangement that has the theme shared by the brass and guitar plus fine harmonies from the reeds.  The ensemble's drummer Keegan Eskritt supplied the arrangement for "Perdido" and supplies the poly-rhythmic feel that pervades the piece.  It's an intelligent updating of the original that honors the melody while giving the music a more modern feel. 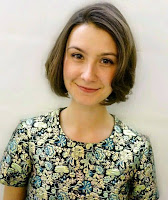 Ms. Bohach is not on every track yet is a major component of the ensemble's sound.  Her wordless vocals on Nicholson's "Eventide" adds depth to the melody on the opening (in the style of Norma Winstone, especially when blended with the trumpets).  She's much more prominent on "Isaya", a piece composed by vocalist Ineke van Doorn and Marc van Vugt's for the latter's Big Bizarre Habit group.  Ms. Bohach dances easily through the melody, scatting pleasingly after guitarist Julian Clegg's fine solo.  She takes a quieter approach on "(Ocean) Bloom", giving the ballad a prayer-like feel. The arrangement, by trumpeter Michael Henley, keeps the mystery of the original but has a cleaner sound. The album closes with "Tanz Onhe Antwort (Dance Without Answers" - composed by German saxophonist Klaus Gesing - is also a ballad. Arranged by Promane, the melody is caressed by Ms. Bohach (both with lyrics and her wordless flight with the brass after pianist Noah Franche-Nolan's impressive piano solo.

"When Day Slips Into Night" not only highlights the young musicians who are part of the programs at the University of Toronto but also illuminates the vision of Terry Promane has for this odd-sized large ensemble.  Everyone plays well, Brooklyn Bohach stands out without stealing the spotlight (the arrangements always posit her as one of the band), and the material covers a large swath of the jazz ouevre.  Like their 2017 release, The U of T 12Tet keeps your attention throughout by making memorable music throughout.

The ensemble has no true website but you can buy the albums and listen to excerpts on both iTunes and Amazon.