It was 49 weeks ago (give-or-take) that saxophonist Mike Casey (alto and tenor) brought his Trio to The Side Door Jazz Club in Old Lyme to record his debut album.  Joining him onstage was bassist Matt Dwonszyk and drummer Corey Garcia, his "regular unit' for the past three years. The two sets included originals from the saxophonist and drummer plus pieces by "classic" saxophonists Ornette Coleman, John Coltrane, and Jackie McLean (who founded the Institute at the Hartt School of the University of Hartford where Casey studied with Abraham Burton, Rene McLean and Steve Davis, among others). 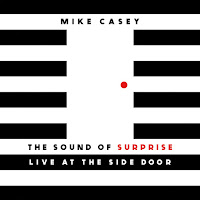 The album, "The Sound of Surprise: Live at The Side Door" (self-released) comes out on February 7 and the Trio celebrates its release this Friday (2/03) at the very venue where they recorded.  The recording is quite "hot" with the bass and drums on equal sonic footing as the saxophone.  It's obvious this is a working band as one can tell these musicians are conversing, challenging, and supporting each other throughout the performance.  Dwonszyk stands out as quite a melodic player when he solos as well as laying down a solid bottom for his cohorts to build upon.  Garcia is impressive as well; the African rhythms he sets up on the opening track, "Hydraulics" (which the drummer composed), brings to mind Art Blakey's powerful work with his Jazz Messengers. The leader shines as well, with solos that not only push against the sounds produced by the bass and drums but also ride on their flow. Casey's alto solo on McLean's "Little Melonae" is a gem; at one point, his interaction with Dwonszyk features a smart bit of counterpoint amidst the "walking" bass lines. Another highlight is the original "Dagobah", with the tenor suggesting Coltrane as the rhythm section roils below.

Casey has been busy over the last year, not only working on producing the album (crowd-funded) but teaching, playing with the Trio and working with other ensembles.  I like the fact that his debut is a live album, the Trio did not try for perfection in the studio, opting instead to illustrate how a "live" show gives a truer representation of a working group.

The Mike Casey Trio hits the stage at 8:30 p.m. For tickets to the show and more, go to thesidedoorjazz.com.  To learn more about Mr. Casey and get links to purchase the album, go to www.mikecaseyjazz.com.

Give a listen to "Hydraulics":

I would be tempted to stay overnight at The Old Lyme Inn (which houses The Side Door) because on Saturday, tenor saxophonist and composer J.D. Allen will perform with his Trio. Although neither the venue's website or Mr. Allen's site lists the personnel, he usually plays with bassist Gregg August and drummer Rudy Royston.  Their latest album together, "Americana: Musings on Jazz and Blues" (Savant Records), was issued in May of last year to great critical acclaim, the latest in a series of recordings that posit Allen as one of the finer contemporary composers and musicians.  His pieces, rooted in the blues, are quite melodic, have flowing rhythms, his sound hearkening back to the approaches of John Coltrane and Sonny Rollins without imitating either player (or anyone else, for that fact).

Here's a taste of the Trio's latest recording to get you in the spirit: