More Music for Giving Thanks (2) 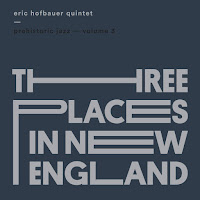 Two years ago, guitarist, composer, and arranger Eric Hofbauer released two fascinating CDs with his Quintet under the monickers of "Prehistoric Jazz Volumes 1 and 2 (released on his Creative Nation Music label). The first was a reimagining of Igor Stravinsky's "The Rite of Spring" and the second a journey into Olivier Messiaen's "Quartet for the End of Time." The splendid ensemble - Jerry Sabatini (trumpet), Todd Brunel (Bb clarinet, bass clarinet), Junko Fujiwara (cello), and Curt Newton (drums and percussion) - took hold of the material and, thanks to the inventive arrangements and despite the title of the project, made listeners hear the material with new ears. Also important to the overall project were David Adler's impressive liner notes. 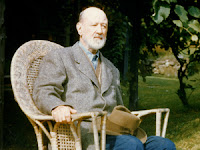 The team is back, including Adler, for "Volume 3."  This time, the Quintet tackles the quintessential American composer Charles Ives  (pictured left) and his "Three Places in New England."  Ives, well-known for his insertion of hymns, marching band tunes, and dissonant melodies in the midst of his symphonies, does not have a huge catalog like Aaron Copland or Leonard Bernstein and he continually worked on pieces - Ives started sketching out "Three Places..." in 1903, did the main work between 1911-14 and finished revisions in 1929. 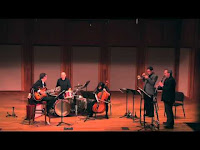 What Hofbauer has done here is create an atmosphere that takes Ives's piece through various stages of jazz. One hears a touch of early New Orleans, Duke Ellington's "jungle music", swing, bop and more, doubling the piece from its 20-minute structure with the additions of solos and group-within-the-Quintet interaction.  The real joy is how well this approach works. All the musicians are stalwarts.  The crisp electro-acoustic sound of Hofbauer, the classically inspired tones of Sabatini's trumpet, the round sounds and "hot" swing of Brunel's clarinet, and the drive plus the colors that Newton produces.  Extra credit should go to Ms. Fujiwara as both her arco and pizzicato work are par excellence (she "walks" a bass line with the fluidity of Ron Carter and Christian McBride).  Just listen how the Quintet creates an amazing amount of musical heat (while maintaining a fine sense of humor) on "Putnam's Camp, Redding Connecticut" yet also allows for Ives's melodies and "quotes" to be heard.  Guitarist Bill Frisell recorded "The "St. Gauden's" in Boston Common", the composer's tribute to the sculpture dedicated to the first African American  regiment to fight in the Civil War.  While Frisell's 1993 version was fairly short, Hofbauer stretches this performance to 17 minutes, going in so many different directions. 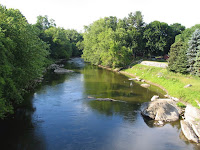 By the time the listener reaches the third and final track, "The Housatonic at Stockbridge", one is ready for this crazy blend of hymn and "free" playing that reaches a thunderous climax followed by a quiet guitar melody that takes the piece to its close.  The music does not seem finished, as if both Ives and Hofbauer could see a continuation of these studies.  No matter how you perceive the closing movement, this music is a striking piece of Americana. Charles Ives pushed the boundaries of classical music with his approach to orchestral and solo works (his songs also cover a great amount of territory and one can hear how they influenced composers like Aaron Copland and Randy Newman).  Eric Hofbauer and Quintet also push boundaries, make you hear American music in different ways, illustrating the fusion of styles that compelled Ives and the multitude of curious jazz and classical performers and composers throughout the 20th Century to the present day.  "Three Places in New England" is quite an aural treat - enjoy the journey. 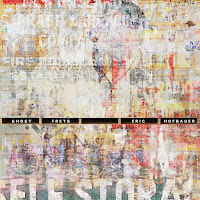 Earlier this Autumn, guitarist Hofbauer digitally released "Ghost Frets" (Creative Nation Music), an 11-track solo guitar album dedicated to his late musical partner, guitarist Garrison Fewell (1953-2015).  Over the years, the two musicians had a built a bond based on exploring music from all genres and styles. Though they only released one album together - 2007's "The Lady of Khartoum" - the duo spent a lot of time playing together.  That sense of openness and play is quite audible on the new recording, an eclectic blend of improvisations, two pieces by Fewell, and one track each from Thelonious Monk ("Let's Cool One"), Eric Dolphy ("Out To Lunch"), Joe "King" Oliver ("Buddy Bolden's Blues"), George Harrison ("All Things Must Pass"), and Richard L. Butler and Timothy Butler of The Psychedelic Furs ("The Ghost In You"). 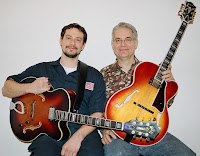 The eclectic choice of material plus the improvisations gives the listener plenty of choices to find their way.  Two of the first three tracks are come from Fewell, the pleasing swing of "Blues Update" and the fascinating "Ayleristic" with its blend of John Fahey, Robert Johnson, and Sandy Bull.  There's a sense of mystery to the latter track, a sense that Hofbauer is listening to his former partner's voice  telling him to dig deeper, into the emotional heart of the music.  This whole project has a sense of purpose; one gets a feeling these musical stories need to be told.  The depth of the audio is intense, the guitar sound flowing from the speakers or into earphones clean and clear.

Whether it's the slide guitar reading of the Harrison song (an impressionistic opening leads to a bluesy and intoxicated reading of the melody) or the traditional yet contemporary take on "Buddy Bolden's Blues", this music is engrossing.  Monk's tune has a pleasing swing and like that master's music, is filled with rhythmic surprises.  "The Ghost In You" has a fine melody and a lightness that lasts the entire piece. Not surprisingly, "Out to Lunch" displays the angularity and playfulness of the original.  The improvised pieces runs from the percussive "Masafir" (the guitarist creating the rhythm plucking the strings behind the bridge) to the playful rhythmic swing of "Scratchadelic" (listen and you'll understand the song's title) and on to the Monk-inspired "Meet @ Office, Midnight" (a bluesy ballad) to the album closer "A Sognare di Bergamo" (another ballad, this one with a Romantic classical feel).

"Ghost Frets" also includes liner notes from David Adler that are well worth checking out, especially for the explanation of the relationship Eric Hofbauer had with Garrison Fewell.  The album is a tribute but not in the traditional sense.  Yes, it celebrates the relationship of the two musicians but also celebrates the artist's connection to music.  Music this good has stories embedded in the notes and the performances, in the slide of the guitarist's fingers on the fret board, on the strength of the plucked notes and chords.  Each listener will find different ways into this music but, with patience and a sense of curiosity, each person will be rewarded.

For more information, go to erichofbauer.com.

Take a listen to the "King" Oliver tune - the album is available only through Bandcamp - click on "buy" below to do just that: