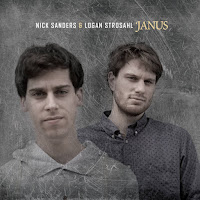 Pianist and composer Nick Sanders met saxophonist and composer Logan Strosahl 10 years ago when both were students at the New England Conservatory  of Music in Boston.  Sanders' Trio has issued two acclaimed CDs on Sunnyside Records and served as the rhythm section for Strosahl's 2015 debut for the label.

"Janus" (Sunnyside) finds the duo in a playful mode playing program that includes classical works from 14th Century France, a work each from Thelonious Monk and Hoagy Carmichael, the standard "Old Folks", pieces from Messiaen and Couperin, plus several originals.  Both musicians keep melody foremost even on up-tempo pieces such as "Be-Bop Tune", an original credited to both of them.  Strosahl's title composition finds him swinging a la Lee Konitz as Sander's struts below him. The Monk tune, "Thelonious", also jumps with glee with Sanders backing work a mash-up of various 20th Century styles, from boogie to swing to mainstream and on.  The tenor solo rises up from the melody and takes off on a sprightly romp.

"Mazurka", also composed by the saxophonist, is an off-center waltz, plenty of stops and starts plus a splendid melody that both musicians play.  Strosahl overdubs alto and tenor for the opening section of "Rose, Liz, Printemps, Verdure" composed by Guillaume  de Machaut, a medieval composer and poet from France.  The interplay of piano and saxophone, especially in the closing minute as they both move through the melody contrapuntally, is such a delight.  Messiaen's "Selections from Vingt Regards Sur L'Enfant Jesus" is darker yet more expansive, Strosahl's tenor solo, gruff at times and sweet at others, moves through the thick piano chords.

"Stardust" features a "floating" piano accompaniment to Strosahl's breathy tenor, sounding like both Coleman Hawkins and Ben Webster. The solos are so gentle, hewing close to the melody, with genuine emotion as opposed to schmaltz.  That leads into the album closer, the delightful "Les Amusemens" from François Couperin. The lovely baroque melody (the composer wrote in the late 17th and early decades of the 18th Centuries) has an intoxicating forward motion and the musicians play it with grace.

"Janus" is an album that reminds one that good music is ageless and that musicians who approach with open minds and ears (and plenty of talent) can make it sound new again.  Nick Sanders and Logan Strosahl are that kind of musicians and this album does feel fresh and alive.  Buy a copy for yourself and give this recording as a gift because the music is so compelling and joyous.

Here's a link to the album page: 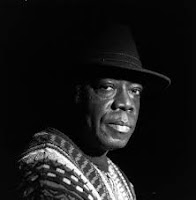 As one of those listeners who came to age in the post-John Coltrane era and the early years of the AACM, one would hear a number of recordings featuring drums and saxophones.  Andrew Cyrille (born 1939) was right in the midst of that musical revolution working and recording with fellow drummer Milford Graves, with vibraphonist Walt Dickerson and, most notably, pianist Cecil Taylor.  It's easy to hear Mr. Cyrille as a descendant of Max Roach although his most famous teacher was the great "Philly" Joe Jones.  Both Jones and Roach were "story-telling" drummers, musicians who could most certainly keep time but also added so much to the thematic sections of songs and beneath the soloists. 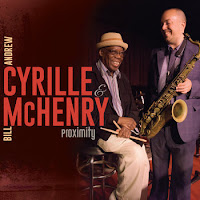 The drummer and composer, who turns 77 in November, remains busy not only with his own groups but also as a member of Trio 3, an ensemble with Oliver Lake and bassist Reggie Workman.  He has two albums this month, one with his Quartet on ECM and "Proximity" (Sunnyside), an adventurous duo recording with tenor saxophonist Bill McHenry.  The date grew out of a June 2014 Village Vanguard gig featuring McHenry's Quartet - the drummer and the leader played one night as a duo and had such a great time (as did the audience) that they went into the studio 5 months later.  The results will remind older aficionados of those halcyon days of the 1970s and serve to educate younger listeners to the power of two.

Four of the 11 tracks are improvisations, two (including the title track) are Cyrille originals, and there is one each from drummer Don Moye and pianist Muhal Richard Abrams.  Both men play with poise, joy, fire, and create a program that resonates.  McHenry, 33 years younger than his musical partner, is one of those musicians who fits into almost any musical setting.  His solos have a wonderful logic, even as they dance around the rhythms.  He never forces anything and, when you pay attention, one hears a big, full, tone but a light attack.  As for Mr. Cyrille, he never wastes a sound or a beat.  His time is impeccable, he both leads and follows, he can be forceful as well as make the listener lean forward to hear his sounds.

Without going into specific songs, you should just start at the beginning and listen all the way through.  There is plenty of music, strong melodies, spicy solos, and splendid dialogues throughout.  Andrew Cyrille and Bill McHenry create musical magicians and "Proxmity" is a treat for sore ears.

Here is a link to the title track: sunnysidezone.com/track/proximity. 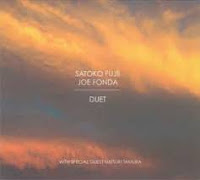 If ever an album needed a video of the performance, "Duet" by pianist Satoko Fuji and bassist Joe Fonda (Long Song Records) is one. Not that the music the duo performs is not strong on its own but it would be enhanced by watching the musicians playing and interacting.  Personally, I have seen Mr. Fonda play numerous times  and there are few people I have seen who are as "one with their instrument" as he.  If you listen closely to this recording, you can hear him breathe and occasionally sing.

This is a recording of the first time Ms. Fujii and the bassist ever met and played together.  They certainly knew each other's works and sense of adventure so it comes as little surprise that this performance goes in so many directions and never loses it's focus.  The first cut, "Paul Bley", is 37:32 seconds of powerful music, with both musicians really digging in, pushing each other to go deeper, to take musical chances - the closing moments are simply beautiful.  The second track, "JSN", adds the pianist's husband Natsuki Tamura on amplified trumpet to the duo.  Also totally improvised, it's a meditative piece, moving out of its rubato interaction of trumpet and bass into a poetic piano melody supported by the full bass tones.  The trumpeter plays quiet bells in the background and slowly the intensity rises with the insistent piano pushing the others to raise the volume.  Later on, Ms. Fujii plays inside the piano as her husband creates a sonic storm and Mr. Fonda moves to flute. The piece fades out at just over 11 minutes.

Satoko Fujii and Joe Fonda meet for the first time yet their mature and and adventuresome musical interactions sound as if they have been together on the bandstand for decades. Because both musicians have long careers creating challenging and rewarding performances, they trust each other to be "free" and honest.  For more information, go to www.longsongrecords.com.