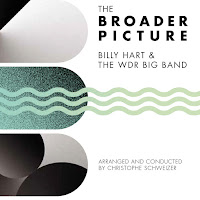 Billy "Jabali" Hart, drummer and composer extraordinaire, turns 76 this November and remains one of the busiest musicians in the world. He leads his own Quartet, is a member of The Cookers, reunited with Dave Leibman every now and then in Quest, records and plays with numerous artists plus keeps up a busy teaching schedule.  Over the decades, he has toured and recorded with Miles Davis, Eddie Harris, Herbie Hancock, Stan Getz, Shirley Horn, and a host of others musicians famous or on their way up.

Mr. Hart, according to numerous sources, has only recorded with a big band once (Mingus Dynastry) and did record as a member of Lee Konitz's Nonet but never his own music. Until now, that is.

The Swiss-born Christophe Schweizer, trombonist, composer, and arranger, first played with the drummer when he first came to study in New York City in the early 1990s. Schweizer decided it was time that Mr. Hart have his music played with a big band and not just any big band but the WDR Big Band. Based in Köln, Germany, the WDR came into existence in the late 1940s as Germany was beginning to rebuild itself and the radio was the main source of news and entertainment. First as an off-shoot of the NWDR Band based in Hamburg, the Köln band started to as a "dance band" with as many as 35 musicians, including a full string section. It was not until 1982 that the WDR became the jazz big band we know today.  The ensemble keeps a busy performing schedule, hasa very popular Facebook page (replete with live concert footage - go to www.facebook.com/wdrbigband/ - and is one of the most accomplished groups in the world (Album personnel listed below.)

The new album, "The Broader Picture" (ENJA/Yellowbird), is nearly 80 minutes long although it feels like half that length. The program features eight originals chosen from Mr. Hart's growing repertoire played an 18-piece band that includes the composer at the drums.  Schweizer's arrangements often keep the drums front and center while the sections react to and "color" Mr. Hart's contributions.  Surprisingly, the opening track "Teule's Redemption" (first recorded with Quest and then on "Oceans of Time" (1997 - Arabesque Records) and now on the new album by The Cookers, begins with an unaccompanied bass solo (John Goldsby) - he's soon joined by his rhythm section partner and, little by little, the sections come in. The early part of the piece sounds as if the big band is tuning up or, actually, "revving its engines" ready to let loose.

If you do not know the music the drummer has created over the decades, this album is a wonderful overview.  The handsome media-tempoed ballad "Layla-Joy" was first recorded on Mr. Hart's exciting 1977 debut as a leader ("Enhance" on the A&M/Horizon label) while the bouncy "Naaj" and powerful "Reneda" come from his second release, 1988's "Rah" (on the Gramavision label). These versions have a contemporary feel with arrangements that open to fine solos with sectional writing that may remind some of Gil Evans, Bob Brookmeyer, and Jim McNeely.  There is no clutter even when the music "roars" which one hears on the opening track, on "Tolli's Dance", and the afore-mentioned "Reneda."  Echoes of Maria Schneider's atmospheric sound move through the lovely "Lullaby For Imke", especially during the splendid alto flute solo of Johan Hörlen.

There is no need to analyze each and every track. Suffice to say, if you like modern big band music, "The Broader Picture" will satisfy your needs.  If you are a fan of Billy Hart and wonder what his music would sound like if the palette was expanded, you will be quite pleased by how Christophe Schweizer has approached this music and how he employs the WDR Big Band.  In a year of superlative recordings, "The Broader Picture" stands out.  Give this music the time it deserves and demands; enjoyment will ensue!