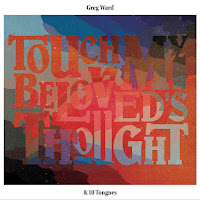 Alto saxophonist, composer and arranger Greg Ward, perhaps best known for his work with drummer Mike Reed's People, Places & Things band, has created a soundtrack for a new dance piece choreographed by Onye Ozuzu. The two artists, both based in Chicago, were invited to create a new, inter-disciplinary, work for the 2015 "Made In Chicago: World Class Jazz" series held in Millennium Park.  Role Schmidt, executive director of the Chicago performing arts center Link’s Hall, had heard "The Black Saint and The Sinner Lady", the 1963 classic from Charles Mingus, and thought the 39-minute piece would be perfect for a new adaptation  Once Ward heard the Mingus music, he felt that a new work created on the various musical concepts Mingus used would be better for his vision.  Although the earlier work features an 11-member ensemble, Ward wrote his music for 10 instruments.  Nevertheless, both pieces are written for dance (although the older work was not created for a specific dance troupe) and need the wider palette of sound.

The new work, titled "Touch My Beloved's Thoughts" (Greenleaf Music, is credited to Greg Ward & 10 Tongues. He's assembled a talented ensemble that features Tim Haldeman (tenor saxophone), Keefe Jackson (tenor and baritone saxes), Ben LaMar Gay (cornet), Russ Johnson (trumpet), Norman Palm (trombone), Christopher Davis (bass trombone) plus the rhythm section of Dennis Luxion (piano), Jason Roebke (bass) and Marcus Evans (drums). Both the choreographer and the composer are influenced by Mingus's choice of source material, his use of blues, folk music and world music (today, we might dub this music "Americana") and his fearless nature. "Black Saint..." shows the influence that Charlie Parker, Max Roach, and Dizzy Gillespie had on Mingus's composing (he admits so much in his copious liner notes) but one must also note the effect that Duke Ellington had on the bassist.

One should listen to "Touch My Beloved's Thoughts" all the way through each time.  One can marvel at the arrangements, how the composer/arranger shares the melody among the participants, how the solos naturally rise out of the music, how each musician's voice counts, and how the ensemble gels in front of a live audience (the music was recorded at Constellation in Chicago). You do not need to see the dancers to enjoy the way the songs connect.  Ward's alto soars on the opening cut, "Daybreak", yet he makes sure to step back to the ensemble so that the phrase that the reeds and brass play can lead in to "Singular Serenade", a handsome piano spotlight for Luxion (whose career includes recording and tours with trumpeter Chet Baker.) The pianist is also featured on the next track, "The Menacing Lean", an up-tempo bolero where he not only solos but has several interactions with the brass.

The blues is so very important to the music. Tracks such as "With All Your Sorrow, Sing a Song of Jubilance", with its heartfelt bass trombone solo from Davis (he carries the melody as well), the sweeping sectional work, powerful piano fills, and the gentle touch of the bass and drums. Ben LaMar Gay's muted cornet solo on "Dialogue of the Black Saint", which comes after Roebke's powerful bass solo and the heated opening theme, is wonderfully impressionistic; you can almost see the dancers bending and moving with his exciting work.

The program moves in many directions all the way, building to the powerful final track, "Gather Round, the Revolution Is At Hand" with its martial drumming, bouncy bass line, and excellent solos from Russ Johnson as well as Ward. The leader traverses over fascinating territory while also sharing variations of the melody with the piano and the other reeds plus the counterpoint of the brass and the powerful drumming of Evans (a longtime member of flutist Nicole Mitchell's Black Earth Ensemble). It's a stunning close to a splendid work of art.

Though this is only his third album as a leader and first with a large ensemble, Greg Ward shows a distinctive voice as a composer (also, he has written for dance troupes before). Yes, there's a Mingus connection to "Touch My Beloved's Thoughts" but, because Ward utilizes some similar approaches, this piece does not feel overly derivative. In fact, this music sounds quite fresh.

For more information, go to www.greenleafmusic.com/touch-my-beloveds-thought/.

Excerpts from Touch My Beloved's Heart from BraveSoul on Vimeo. 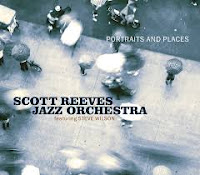 Scott Reeves, composer, arranger, flugelhorn and trombone player, is a Professor of Music on the faculty of the City College of New York. He's also worked with the big bands of Dave Liebman, Chico O'Farrill, Oliver Lake, and Bill Mobley. He has released four albums as a leader, all with ensembles of seven or less.  "Portraits and Places" (Origin Records) is how fifth recording and serves as an introduction to the Scott Reeves Jazz Orchestra, a 17-piece ensemble with five reeds, five trumpets or flugelhorns (Reeves plays alto flugelhorn), four trombones, plus piano, bass, and drums. Reeves wrote the bulk of the material in his time with the BMI Jazz Composer's Workshop, working with such fine arrangers as Manny Albam, Mike Abene, Jim McNeeley, and Mike Holober.

In the liner notes to the new album, Reeves gives thanks to most of the people listed above plus Duke Ellington, Kenny Werner, Bob Brookmeyer, David Baker, Gil Evans, and Thad Jones.  When you listen to this 8-song program, you'll hear many of this influences, especially Thad Jones. His 50-year old (and going strong today as The Vanguard Jazz Orchestra) ensemble that he started with drummer Mel Lewis was a proving ground for McNeely and Werner as well as a return to form for Brookmeyer.  In his music, Reeves has fun with the various sections of his Orchestra, writing melodies that often leap from one to another.  You'll hear that on "3 'n' 2", a barn-burner that serves as a showcase for the strong tenor sax work of Tim Armacost and the bright tone of Bill Mobley's trumpet.  But listen to the powerful drumming of Andy Watson (Jim Hall, Toshiko Akiyoshi), the chordal contributions of pianist Jim Ridl, and the foundational bass work of Todd Coolman.  The blues is a big part of this music.  The album opens with "The Soulful Mr. Williams" (composed of the late pianist James Williams), a medium-tempo stroll with references to "A Love Supreme" from the leader on his alto flugelhorn solo and in the chordal structure. Yet, listen to how sections call-and-response before Ridl's dancing piano solo.  The blues is also the powerful force behind the final track, the aptly-titled "Last Call."  Here, the solos go to the low tones of bass trombonist Max Seigel (Roy Hargrove Big Band, Lincoln Center Jazz Orchestra) and baritone saxophonist Terry Goss (NY Jazz 9) plus the plunger talents of trumpeter Seneca Black (LCJO).

The centerpiece of the recording is the three-part "L & T Suite."  Dedicated to Reeves' wife Janet (a pianist), the leader weaves in thematic quotes from different composers, three of whom, Igor Stravinsky, Aaron Copland and Bela Bartok, whose work was written for a ballet - the fourth influence is Leonard Bernstein whose thematic material is from his "Symphony no. 2." Each section does have great "movement", with "Wants to Dance" moving on the strength of Watson and featuring a stunning solo from alto saxophonist Steve Wilson. "#2" or "A Trombonist's Tale" is slower, has a gentle sway heard in the sectional work as well a delightful solo from Matt McDonald (trombone, of course). The final "movement" - "Hip Kitty" - belongs to the romping reeds, powerful brass, and the bluesy piano of Ridl.

Vocalist Sara Serpa appears on two tracks, the thoughtful yet uptempo "Osaka June" with fine solos from Wilson (soprano sax) and Ridl in the midst of glorious section writing.  Ms. Serpa's reedy voice is paired with the brass and it's a pleasing juxtaposition. She does get minute or so in front of the band but soon steps aside for the solos. Her soft voice stands on the pleasing arrangement of Antonio Carlos Jobim's "Aquas de Marco", singing unison with the flutes and, after the fine piano solo, is shadowed by the clarinets, returning near the end to help those flutes take the piece out.

"Portraits and Places" not only does the legacy of Thad Jones justice but continues to build upon it. If anything, the original compositions and arrangements of Scott Reeves have more structure, more of a role in the themes of the compositions, and, at many times during the album, a playful sweep and  a joy about them.  Open the windows and let this music fly.

For more information, go to www.creativejazz.com.

Here's a pictoral look at and a listen to a piece from the album's recording session: