It's been a busy several years for guitarist and composer Joel Harrison. The Washington D.C.-native has released a series of impressive albums, each different and each special.  For Sunnyside, he recorded a tribute to Paul Motian arranged for a string quintet and 2 guitars (2011), a septet recording with its roots in classical music (2012), and a recording with a 19-piece orchestra (2013). For Cuneiform, he released a quintet recording with trumpeter Cuong Vu, Italian bassist Lorenzo Feliciati, and drummer Dan Weiss (2012) plus a Blues-Rock guitar fest with bassist Michael Bates and drummer Jeremy "Bean" Clemons (2014).   Also in 2014, he released an album for the London-based Whirlwind Recordings label that paired the guitarist with sarod player Anumpam Shobhakar, keyboard virtuoso Gary Versace and Mr. Weiss on drums (plus guests). 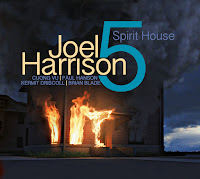 His second release for Whirlwind is titled "Spirit House"; the music features trumpeter Vu, Paul Hanson (acoustic and electric bassoon) plus the special rhythm section of Kermit Driscoll (acoustic and electric basses) and Brian Blade (drums, vocals). The album opens with "An Elephant In Igor's Yard", a noisy blend of bassoon, Vu's articulated trumpet lines and Harrison's hard-edged sound.  The work of the rhythm section stands out, with Driscoll's melodic electric bass lines flying around over the propulsive drums.  There's a sense of hope and wistfulness heard on the ballad "Johnny Broken Wing"  -after the long solo looped guitar intro with its hint at the melody, the bass and drum move in and the handsome melody takes center stage. The solemn trumpet-bassoon opening of "Some Thoughts on Kenny Kirkland", the pianist who passed in 1998, leads to Blade's vocal telling the composer's story of hearing Kirkland playing a solo on the radio. Harrison's solo wails and cries over the overdubbed brass and bassoon.  The other vocal track, "Look At Where You Are", features Harrison taking the lead and Blade supplying the harmony on lyric that celebrate a life now passed.  The long notes of the trumpet in the middle lead back to the vocal that now shares the sonic space with the moaning bassoon and harsh trumpet washes.

Much of this music is reflective with long melodies and thoughtful solos.  "Sacred Love" moves quickly forward on the driving drums but the melody is slow and measured.  Vu's solo, at the beginning, interacts with Harrison's guitar squalls before he moves on his own.  The guitar sound may remind one of Pete Cosey on Miles Davis's "On The Corner." Hanson's bassoon work runs the gamut, from hard-bop to classical to blues inflections.  He also creates interesting settings with his electronics.  How he weaves around the trumpet, guitar, bass and drums on the title track and rides atop Driscoll's active acoustic bass lines on "Old Friends", sounding like a baritone saxophone.   That latter track also includes a very funky drum solo before returning to the somber melody.

"Spirit House" was recorded in 2013 after the Quintet had toured the West Coast. The music is, at turns, solemn, playful, wistful, impressionistic but never boring.  Joel Harrison never lets technique get in the way of melody, even when the music takes a turn for the noisy (the close of the trumpet and bassoon solos on "Left Hook", for instance). Give a close listen and you will be pleased, even moved. 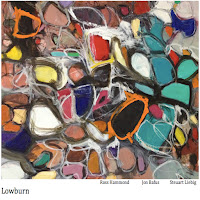 Several months back, I waxed on about guitarist Ross Hammond's acoustic recording "Flight" (review here). I noted that he's mostly known as an electric guitarist and he returns to an electrified mode for his new release knows as "Lowburn" (digital only, link below). The 2 tracks - "Basic Fundamentals" and "Making Friends Wherever We Go" - features the guitarist with the rhythm section of Jon Bafus (drums) and Steuart Liebig (electric bass) recorded live, the first track in March of this year while the latter was recorded last November.  The Trio entered the venue, plugged in, tuned up, and just played.  The results are raucous, hard-edged, rhythmically adventurous, and challenging for a casual listener.  However, if you turn it the music up loud and let it roar, you cannot help but be impressed with the musicians' energy (Bafus rarely lightens up...well, maybe for a minute or 2 on "Basic Fundamentals").

"Lowburn" fires on all cylinders for the better part of 65 minutes.  One hears allusions to Ornette Coleman's electric music, James "Blood" Ulmer as well, along with the more rock stylings of Hüsker Dü and other punk-rock bands, even a hint of the Nels Cline Singers.  This is fearless music that bows to few conventions.  It is, at times, exhausting for my aging ears but ultimately exhilarating.

To find out more and to purchase a digital download, go to rosshammond.bandcamp.com. 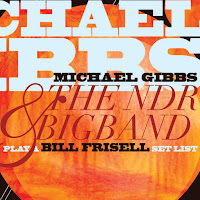 Composer and arranger Michael Gibbs, born in 1937 in Zimbabwe (when the country was known as Rhodesia), first came to the United States in 1959 to study at the Berklee School of Music in Boston. Before settling in Great Britain in 1964, he had studied at Tanglewood, the Boston Conservatory and the Lenox School of Music with the likes of the recently passed Gunther Schuller, Aaron Copland, George Russell and others. He went to work with Stan Getz, John McLaughlin, Pat Metheny, Joni Mitchell, Peter Gabriel, and a host of others in the pop, jazz and classical worlds.

Bill Frisell first met in Gibbs in 1975 in the guitarist's first year at Berklee (the arranger was artist-in-residence). When Frisell moved to Belgium in 1978, he subbed for Gibb's guitarist on a tour of the U.K. and met the bassist Eberhard Weber. The two musicians hit it off and Frisell made his first ECM recordings as a member of Weber's band. 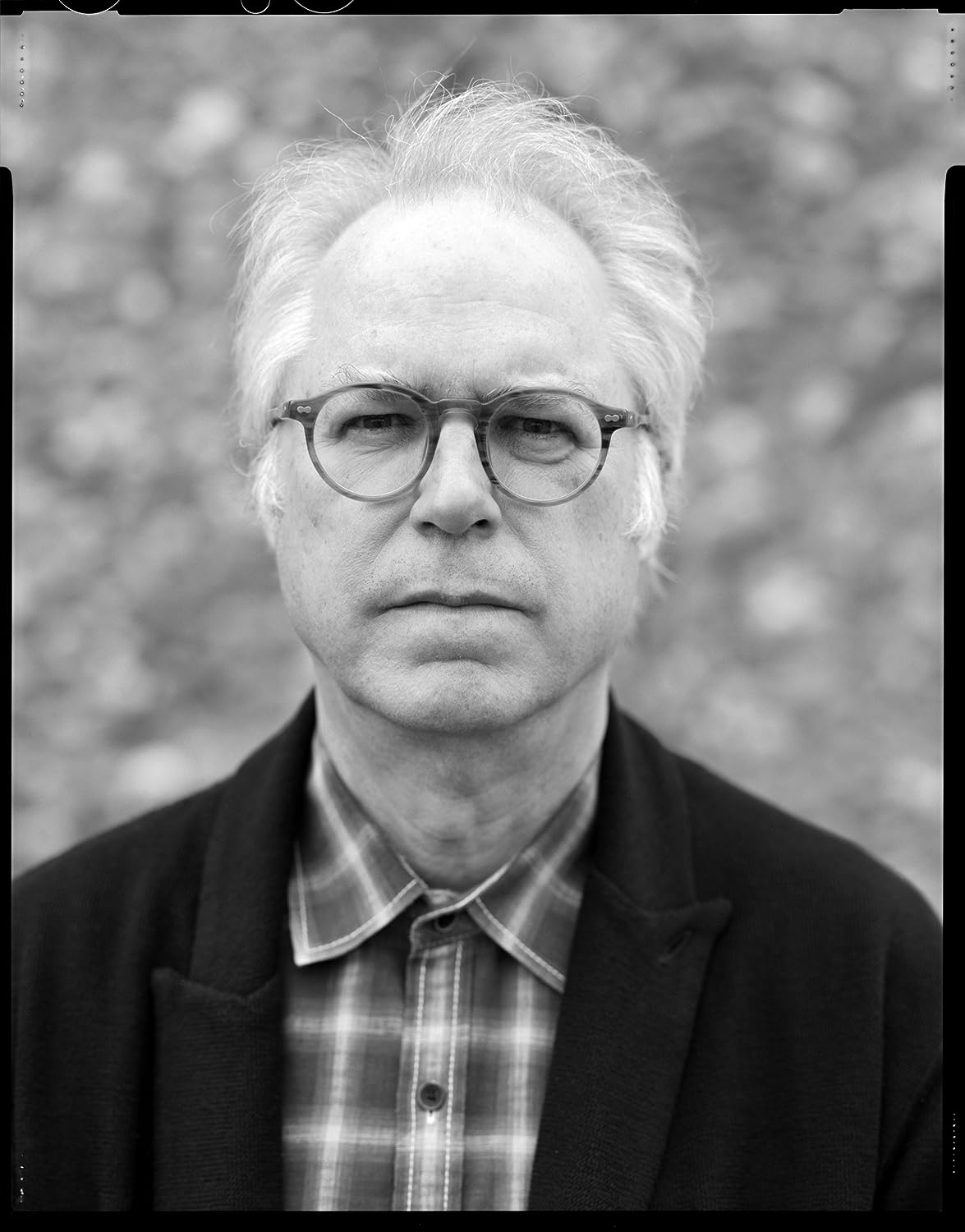 "Michael Gibbs & The NDR Big Band Plays A Bill Frisell Set List" (Cuneiform Records) is fascinating recording of Gibbs with one of his "recording" ensembles plus Frisell (pictured left) and drummer Jeff Ballard.  The program blends Frisell originals with pieces from Thelonious Monk (a guitar/drums duo on "Misterioso"), Gil Evans, Benny Goodman/Count Basie, Lee Konitz and John Lennon. Frisell and Ballard lead the band in on "You've Got To Hide Your Love Away", taking their time to introduce the melody. Soon, the brass and reed have taken the melody and the guitarist moves around them, playing counterpoint on the chorus.  Mr. Konitz's "Subconscious-Lee" is a delightful romp with the guitarist showing a touch of Les Paul in his swinging riffs.  And, does he ever swing on "Benny's Bugle", riding the riffs of the brass and popping percussion (Mario Doctor on bongos alongside Ballard.)   There's a touch of dissonance at the opening of Evans' "Las Vegas Tango" but one can hear the classic Miles Davis sound in the arrangement plus strong solos from pianist Vladyslav Sendecki, trombonist Klaus Heidenreich and Frisell (who really rises above the ensemble.)  The guitarist unleashes his "loops" on the second half of his compositional medley "On The Lookout/Far Away."  Gibbs captures Frisell's playful side on "Freddy's Step" the short track that closes the CD.  He opens the piece for alto saxophonists Fiete Felsch, Lutz Büchner, and Peter Bolte to get short solos (4 bars at most).  It's a treat, one that the audience at Überjazz Festival in Hamburg, Germany, really enjoys. Felsch returns on "Monica Jane" to produce a bluesy yet vibrant solo on one of Frisell's languid ballads, given a nice bit of swagger in the brass section.

Michael Gibbs and Bill Frisell back together, albeit for the first time since the late 1970s. Along with Jeff Ballard and the NDR Big Band, they produce a lot of pleasing sounds. Most of the uptempo piece are playful, the arrangements frame and support the pieces well, and Frisell's guitar work, while a bit tamped down at times, still shines on the majority of tracks.

For more information, go to cuneiformrecords.com/bandshtml/gibbs.html.

Here's a taste of the collaboration: