Independence Day 2015 is upon us and what better way to celebrate  than to honor America's contribution to the world of music, jazz.  The Side Door Jazz Club in Old Lyme brings in 2 masterful pianists leading 2 fine Trios.  Friday evening, Johnny O'Neal continues his comeback, recovering from a long and successful battle with H.I.V.  The pianist/vocalist, who hails from great music town of Detroit, MI, made his debut in New York City in the early 1980s, playing in Art Blakey's Jazz Messengers, Milt Jackson's group and with Clark Terry.  After being attacked in New York City, O'Neal moved out, spending many years on the road. In the midst of his illness, he played the role of Art Tatum in the biopic "Ray" (2004), a role he was well-suited for as O'Neal is a master at  the keys.

He has returned to live and perform in NYC. As you can see by the photo above, Johnny O'Neal also is a vocalist and a fine one at that. He's bringing bassist Luke Sellick and drummer Charles Goold (son of tenor saxophonist Ned Goold) along for the ride.  Expect to knocked by the Trio's virtuosity and Mr O'Neal's warm personality.


On Saturday night, the fireworks will be coming out of the piano when the Aaron Goldberg Trio comes to The Side Door. Mr. Goldberg has a great career as both a sideman and a leader, working with the likes of Joshua Redman, Freddie Hubbard and Nicolas Payton while releasing 5 CDs as a leader.  His latest disk, "The Now", was issued this past January on Sunnyside Records and features the pianist/composer with bassist Reuben Rogers and drummer exraordinaire Eric Harland.  Goldberg is such a fine melodic player but also has an adventurous side.

For the gig in Old Lyme, the rhythm section includes bassist Matt Penman (SF Jazz Collective, James Farm) and drummer Mark Whitfield, Jr (son of guitarist Mark Whitfield). Doors open at 7:30 p.m. and the Trio takes the stage at 8:30.  For ticket information and reservations, go to thesidedoorjazz.com or call 860-434-0886.  To learn more about Aaron Goldberg, go to www.aarongoldberg.com.

Here's a track from the new CD:

Bassist Joe Fonda will be at The Buttonwood Tree in Middletown on Friday July 3rd, serving as the rhythm section for The Nu Band, a quartet that also features alto saxophonist Mark Whitecage, trumpeter Charles Heberer, and special guest Erhard Hirt (guitar). The ensemble, formed in 1999 by Whitecage and drummer Lou Grassi, uses composition as a springboard for interactive collaborations and solos.

For this performance, there is no drummer listed so the music should have more of a chamber feel. However, if you know Joe Fonda, he can lay down some pretty serious rhythms. To find out out more about Nu, go to joefonda.com/the-nu-band. For more information about the gig, go to www.buttonwood.org. One caveat - The City of Middletown Fireworks Festival takes place on the evening of July 3, so build in extra time to get to the venue. Over his career, which now hands nearly 3 decades, trumpeter, composer and conceptualist Dave Douglas has not been averse to taking risks. He has recorded in trio, quartet and quintet settings, worked with strings, with a brass quartet plus drums, interpreted the music of Joni Mitchell, Mary Lou Williams and Wayne Shorter as well as gospel and Americana, plus built of body of compositions whose quality rivals that of any composer in the creative music idiom.

He's recorded with electronic instruments before (for example, 2003's "Freak In") and taken political stands (2001's "Witness").  For his new CD, "High Risk" (Greeneaf Records), he matches his angular trumpet work and thoughtful compositions with the exciting rhythm section of Mark Guiliana (drums, electronics drums) and Jonathan Maron (electric bass, synth bass) plus adds the electronic manipulations of DJ Shigeto (aka Mark Saginaw) to create a most fascinating program.  The album is "dedicated to the entire community of people working towards global climate action" and the final track, "Cardinals", was "written in the wake of the events in Ferguson, Missouri in 2014." 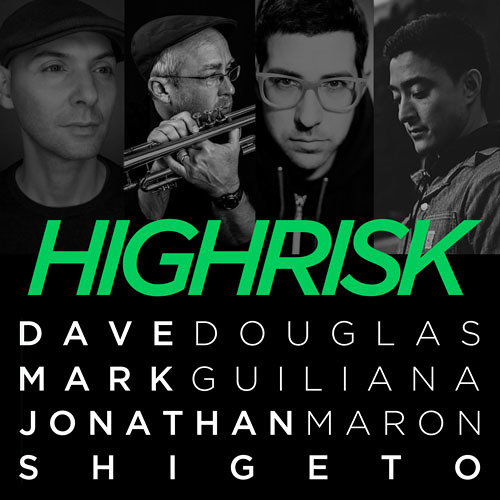 From the outset, the music gets and keeps one's attention, with the sparkling work of Giuliana and deep notes from Maron (Groove Collective, Josh Roseman, Maxwell) pushing the music forward.  The somber trumpet melody of "Molten Sunset" is colored by the bubbling synth figures surrounding it and the amazing snare work below.  The bluesy funk of "Etiquette" sound like the backdrop of a Tom Waits piece but Douglas's trumpet leans more towards the funky side.  The title track is an atmospheric ballad with Maron's thick tones shadowing the trumpet melody - listen to the bass counterpoint and the percussion attack during the leader's driving solo. The afore-mentioned "Cardinals" opens with throbbing percussion, moaning synths and a lively bass melody. The trumpet enters, playing a elegiac melody.  The pace stays steady even as the snare drum enters and then departs.  Douglas stays in an introspective mode throughout and, with the wash of synths around him, the music has the air of a moist summer's night moving into a cloud-streaked morning sky.

"High Risk" is powerful music, especially in the light of its dedication and inspiration.  Dave Douglas and his cohorts do not play it safe and one imagines this music opens up even more in live performances. Music continues to address political and social issues(as artists have for centuries) and that helps to give this album extra depth.  For more information, go to www.greenleafmusic.com/davedouglas/.