Listen to the music of Henry Threadgill from 40 years ago, when the trio known as Air made its first recording.  His saxophone and flute, the majestic bass of Fred Hopkins (1947-1999) and the brilliant percussion of Steve McCall (1933-1989) sounded like few other trios (compare their recordings to the work Sonny Rollins created in the 1950s) - the evidence of Threadgill's Chicago upbringing can be heard in the occasional hints of blues that enter the pieces but the freedom, the unexpected twists that don't sound dated or forced even today, their intuitive interactions (both live and on record) excited many people willing to travel down the trails they blazed.

Threadgill formed Zooid at the turn of the 21st Century building the sextet/quintet around the incredible tuba work of Jose Davila and the expressive guitar of Liberty Ellman.  By the time of the group second Pi recording "This Brings Us To, Vol 1." (2009), drummer Elliot Humberto Kavee joined the ensemble with cellist Christopher Hoffman coming the 6th member (original cellist Dana Leong was on the band's initial release but left before #2.)

"In For a Penny, In For a Pound" is the new Pi release and, with the departure of bassist Stomu Takeishi, the group is once more a quintet. The 2-CD set features 6 tracks with each disc starting with a short track (the first disk is the title track, subtitled "opening" while the second disk starts with "Off The Prompt Box" subtitled "exordium", meaning "the beginning.") The other 4 tracks are much longer, episodic compositions dedicated to the different instruments (with the exception of the reeds) in which the quintet breaks into smaller formations at various times.  Threadgill is fine voce throughout, his squiggly alto lines or colorful flute playing (he plays both concert and bass flutes) weaving in and out of the sound spectrum.  "Ceroepic (for drums and percussion)" opens with the impressive melodic interaction, the alto sax in the lead, Davila playing counterpoint while both the guitar and cello plays the foundational bass lines.  Kavee's drums people the work forward as the solos unwind, first Threadgill then Hoffman.  After the fine cello solo, the piece and heads off into quiet territory, with just cello, guitar and percussion in the mix. After several several changes in direction, Threadgill's flute takes the lead for a turn before handing off to Davila, now on trombone.  Despite the subtitle, there is never a drum solo in the spotlight although Kavee is crucial to the movement in several sections. Meanwhile the following cut, "Unoepic (for cello)" does start with the instrument the piece is named for but soon everyone joins in.

Meanwhile, this music features all the elements we have come to expect in Threadgill's music.  Rhythms that push but do not represent any particular "style", solos that grow right out of the melodies and great interactions.  On "...Prompt Box", listen to how each musician plays rhythm especially and notice how the leader steps out after the opening theme, not to return. The interaction of guitar and cello at the onset of the last cut, "Unoepic (for guitar)", sets the stage for several duo dialogues (alto sax and drums, cello and drums) yet, over the course on nearly 18 minutes, there are moments when the musicians solo over drums, tuba and guitar or guitar, cello and drums and so forth. Threadgill's alto erupts out of a drum solo, exchanging phrases with cello and guitar, then stepping out for a thoughtful and somewhat abstract solo.

At 80 minutes, "In For a Penny, In For a Pound" is much to digest and would not fit easily on one disk.  That said, this suite is most certainly interconnected, with themes moving in and out of separate tracks. While there are solos throughout, the rhythm section does not just "comp" or simply keep "time" but are vitally important to the movement and direction of each piece.  When you listen, pay attention to what Liberty Ellman, Christopher Hoffmann and Jose Davila are playing when the there are solos. Melodies and rhythms intermingle, all while the music continues to move forward.  On the CD jacket, Henry Threadgill gives "my endearing thanks and respect" to both Sonny Rollins and Ornette Coleman, musicians, soloists, bandleaders and composers who paved the way for his vision and his music.  Yet, we can be thankful that there is no one like Henry Threadgill. At 71, he's going strong (his work with Wadada Leo Smith and Jack DeJohnette on new recordings is wonderful), seeming to grow stronger with every recording and every ensemble.  For more information, go to www.pirecordings.com/artist/henry_threadgill. Composer and pianist Kris Davis, over the past 12 years since her debut CD appeared on Fresh Sound New Talent ("Life Span"), has grown in ways one might not have expected.  Her solo piano recordings reveal an artist always searching for new ways to express herself, the Trio dates find her and rhythm section avoiding cliches, and her work with Ingrid Laubrock and Tyshawn Sorey in Paradoxical Frog is indescribably audacious.  Her arrangements for Tony Malaby's 2011 recording "Novela" (where she worked with 4 reeds, 3 brass, drums and piano, set the stage for her new project "Infrasound" an octet that features 4 clarinetists (Ben Goldberg, Oscar Noriega, Joachim Badenhorst, and Andrew Bishop), guitarist Nate Radley, organist Gary Versace, drummer Jim Black, and her piano. There is a video on Ms. Davis' website that tells the story behind the group and recording (watch it here)  - the octet had not worked together as a unit until the night before its first gig and went into the recording studio the day after the gig! That written, her new recording - "Save Your Breath" (Clean Feed Records) -  is a tribute to the talent of the musicians, to her arrangements, to her music that allows the ensemble to explore textures and rhythms, to the way silence and noise are a part of the mix and to how the lower reeds (bass clarinets and contrabass clarinets) are utilized.  Opening with "Union Forever", which slowly moves towards a melody not unlike the chorus of "The Battle Cry Of Freedom" but not before introducing all the musicians.  Black is often the spark plug, punching and jabbing, goosing the band forward.  After the band drops out, a lonely clarinet plays above tolling piano chords. Davis' arrangement also has the organ moving in and out the mix, Versace's burbling lines adding a different flavor to the music.  Is that accordion on the introduction of "Always Leave Them (Wanting More)", it's ethereal high notes drifting above the piano and increasingly powerful drums. Radley's guitar serves a similar purpose to the accordion, weaving in and out of the sounds from the reeds and the powerful piano chords. Slowly, the piece builds with the drums and piano in a fiery interchange while the clarinets keen quietly.  Suddenly, the piece falls into a soulful rhythm for Noriega's powerful solo. "Whirly Swirly", which first appeared on Ms. Davis' 2014 Trio CD "Waiting For You To Grow", is a vehicle for Radley's hard-edged solo, over a bass line from Versace and rampaging drums.  The piece stops on a dime and becomes extremely quiet, organ swirls and clarinet phrases nearly inaudible unless you sit still.  When the band returns, Badenhorst's roaring clarinet is front-and-center over a chordal pattern not unlike a Black Sabbath tune. 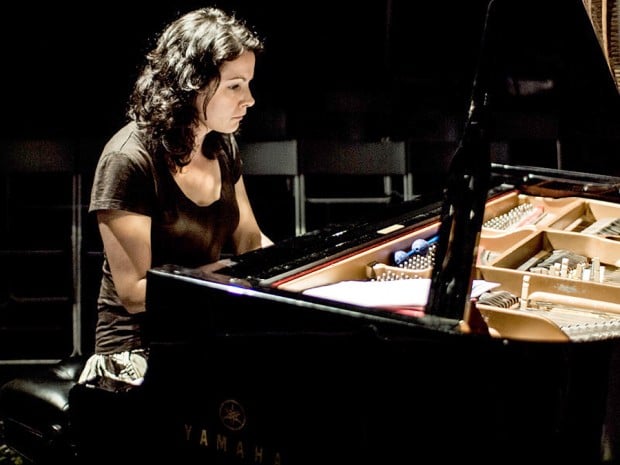 The title song closes the program. The longest track (14:50), the sound rarely rises above a whisper, the instrumentalists stepping up and then fading out. Yet it's not an afterthought or an epilogue.  Look at the cover photo - the music describes what to must be like to be underwater, to be standing on the ocean floor connected to the world above by ropes, breathing air from a tank, the only sounds being your breathing and whatever is going on in your mind.  Each voice in the ensemble contributes to this adventure and it's makes for absorbing listening.

"Save Your Breath" has moments of great beauty and harsh noises ("The Ghost of Your Previous Fuckup" offers much of the latter without ignoring the former), often moving with great force and determination.  Considering the time the octet had to rehearse, perform, and record, this is incredibly fine music.  I can imagine how pieces could get stronger with more performances (alas, only 2 European dates on Ms. Davis' website) but this recording is mighty good.  For more information, go to www.krisdavis.net.

Here's a taste of this fine recording: