The Power of Positive Music 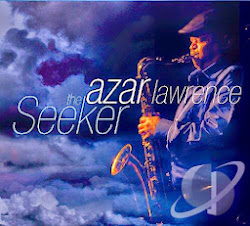 Listening to the opening minutes of the new Azar Lawrence CD, "The Seeker" (Sunnyside Records), brings back vivid memories of listening to McCoy Tyner in the mid-1970s.  It was Tyner's post-Coltrane recordings ("Sahara" - which featured Sonny Fortune, "Enlightenment" and "Sama Layuca" both with Lawrence) that showed me that Black American Music could have the same power, if not more, than the music I grew up listening, especially The Rolling Stones and The Who). Hearing Lawrence's tenor wailing over the forceful piano chords of Benito Gonzalez and the percussion storm created by Jeff "Tain" Watts as "Gandhi" flowed out of the speakers gave me goosebumps. Lawrence, who worked with drummer Elvin Jones before and after his years with Tyner, also worked with Miles Davis, Earth, Wind & Fire, Frank Zappa, and The Cookers (among many others), always displayed a full-throated tenor saxophone style and it's in full force on this "Live" recording (December 2011 at The Jazz Standard in New York City.) Joining him on the front line is trumpeter Nicholas Payton while Essiet Okon Essiet rounds out the rhythm section.  Payton gets to let loose as well as show a bluesy style on tracks such as "Lost Tribes of Lemuria" and "One More Time" (a piece that calms down after Lawrence's opening blast).  "Venus Rising" blends funk and swing, allowing for solos that roar (Lawrence) and "lay back" (Payton), never flagging in intensity or losing its dancing feel.

Lawrence's soprano saxophone appears on only 1 cut and that's the title track.  Building up from the solid piano chords, Lawrence takes the listener on a journey that rocks and swings.  After Watts kicks up a storm beneath the sax, Payton steps in and begins a journey of his own while the drummer responds to the powerful phrases emanating from the trumpet.  Pianist Gonzalez takes a bluesy turn that shows the Tyner influence (Essiet's bass lines are active and attractive.)

There is quite a resemblance to John Coltrane's mid-1960s music on "Rain Ballad."  Lawrence is the only soloist, prodded forward by the power of his melodic lines and the fervent work of the rhythm section.  Watts' drums play counterpoint while Essiet's line are harmonically rich.

Azar Lawrence never disappeared from the music scene, playing jazz and fusion jazz - in recent years, he has worked with pianist Gonzalez as well as drummer Franklin Kiermyer. "The Seeker" shows he's lost none of the power that appealed to listeners in the mid-1970s. If anything, his playing seems even stronger these days.  For more information, go to azarlawrence.com. Drummer, composer and producer Ralph Peterson, grew up listening to funk and r'n'b; when he first entered Rutgers Univerity, he was better known as a trumpet player.  Meeting and studying with Michael Carvin convince Peterson the drums would be his focus and he was playing with pianist Walter Bishop's Trio plus in Art Blakey's 2-drummer big band while still a college student.  After graduation, he played with OTB (Out of the Blue), a quintet that Blue Note Records organized that also featured, at various stages of its 9-year existence, saxophonists Kenny Garrett and Steve Wilson, pianist Renee Rosnes and bassist Robert Hurst.  During that time, Peterson began recording for Blue Note in different settings including a trio with Geri Allen, a Quintet, and introducing his Fo'Tet. He went on to record excellent CDs for Gerry Teekens at Criss Cross and for the German Intuition label before starting the Onyx Music Label.

"ALIVE at Firehouse 12 Vol 2: Fo' n Mo'" is the 4th release on the label.  Recorded in December of 2013, the drummer blends his youthful Fo'Tet - Felix Peikli (clarinets), Joseph Doubleday (vibraphone) and the uncredited (on my edition) Alex Claffy (bass) - with guests Eguie Castrillo (percussion) and Steve Wilson (soprano saxophone).  The fire displayed by the group on tracks such as "Humpty Dumpty" (a Chick Corea composition from his 1978 "Mad Hatter" album) and Bud Powell's "Celia" gets one's blood roiling.  On the latter track, Peikli absolutely flies over the strong percussion duo of Castrillo and Peterson. That exciting music is tempered a long, evocative, reading of Billy Strayhorn's "Chelsea Bridge" that puts the spotlight on Wilson's magical soprano work, Doubleday's ringing vibes and the powerful bass of Claffy.  Castrillo's unaccompanied congas open Peterson's handsome medium-tempo ballad/bossa nova "The Tears I Cannot Hide" which, after the entire band plays through the fine melody, leads to a hardy bass solo and soaring clarinet statement.  The six musicians dance through a joyful performance of Stevie Wonder's "Overjoyed" - the blend of soprano sax and clarinet makes the melody lines stand out.

The leader's powerful work stands out throughout the recording yet Peterson has learned to temper his enthusiasm so that the melody stands out.  His solo that opens "Surrender" is impressive in an understated way; even as he sets the pace for the band, the drummer is serving the songs. Peterson has always been a muscular drummer, loud even on ballads (at times). Now, he is a mentor, bringing young talent to the fore, giving them a solid education on and off the bandstand, lessons they will pass on as they develop into leaders and educators.  While this music has plenty of solos over its 74 minutes, the listener will/should pay as much attention to the work of the rhythm section, to the melodies, the harmonies and how the musicians give their all on each and every song.

Ralph Peterson makes music that is "Alive", alive with possibilities and ideas.  The sound on this CD, captured by Firehouse 12 owner Nick Lloyd and venue manager Carl Testa, is brilliant, especially the sound of the drums (no surprise), the percussion and the vibraphone.  The New Haven venue is quickly becoming a favorite for "live" recordings, with releases over the past few years from Marcus Strickland, Wayne Escoffery, Armen Donelian and Taylor Ho Bynum.  It's also a great room for the audience, allowing close proximity to the creative process.

For more information about this and other Ralph Peterson recordings, go to www.ralphpetersonmusic.com.
Posted by Richard B. Kamins at 8:55 PM