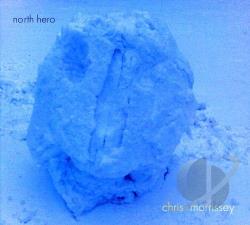 As a good percentage of the continental United States continues to suffer from excess heat (with and without excess humidity), the temptation to stare at the picture above is hard to resist.

Bassist/composer Chris Morrissey, a native of Minnesota (quite familiar with the scene on the CD cover) and now resident of Brooklyn, NY, is a busy musician, playing alternative rock with his band Taurus (he's also the lead vocalist), working with a diverse list of artists from vocalist Gretchen Parlato to country-rock-blues performer Ben Kweller to singer-songwriter Mason Jennings to violinist/singer Andrew Bird.  He also leads a Quartet/Quintet that plays his original compositions that reside in that wonderfully eclectic fusion area of jazz, rock, and Black American music.  "North Hero", his second CD for Sunnyside Records (the first, "The Morning World" was issued in 2009), finds him in the company of Aaron Parks (piano), Mike Lewis (tenor saxophone) and Mark Guiliana (drums) with The Bad Plus drummer Dave King as producer.

Well, you can take the bassist out of Minnesota but, judging by the opening track of the recording, "The Spirit of Chanhassen", you cannot take Minnesota out of the bassist.  Chanhassen is a town of (approximately 23,500) that is actually in 2 counties (Carver and Hennepin) and sits 50 miles southeast of Lake Minnetonka.  Parks' spirited piano intro (an energetic blues figure) sets up the theme played by Lewis (co-founder of Happy Apple) and the quartet is off to the races.  The bassist, who composed all 8 tracks, works with Guiliana to build the foundation of the piece, creating a solid sound for the saxophonist to solo over.  Lewis and Parks play the melody line on "Minor Silverstein" in a higher register so that the blend of tenor and piano has a flute-like quality. Whereas the first track has a "jump-blues" feel to the attack, this track has a drum beat that sounds influenced by The Police.

Pieces such as "Midland, Texas Picnic Area" and "Hands Crystals Anderson" are as playful as their titles, the former a high-powered romp driven by a "racing" walking bass line and high-powered percussion.  The latter track has a sprightly feel, thanks to the hard 4/4 beat in the rhythm section - the pianist and saxophonist take more of a minimalistic approach and the tension between the groove and front line makes the piece stand out.

The pair of ballads, "One Worn Mile" and "Lullaby For Twins", also stand out. The first tune has a strong blues-gospel feel, a melody that unfolds slowly and a splendid piano solo.  "...Twins" opens with a trance-like piano figure that leads to the opening theme played by bass and piano.  That melody line is sweet, also slow to unfold yet one is carried along on the gentle current of the notes.

The program closes with "Electric Blanket", an episodic up-tempo waltz that makes the most of Lewis's airy tones atop Parks' rolling triplets.  Guiliana stands out here, with his fine cymbal work and expressive rhythmic attack.

"North Hero", for all its chill on the front and back cover, is music to savor any time of the year.  Chris Morrissey does not need to show his technical prowess to make a positive impression on the listener. Good band, strong songs, short but striking solos; this all adds up to an enjoyable audio experience.  For more information, go to www.chris-morrissey.com.
Posted by Richard B. Kamins at 5:08 PM