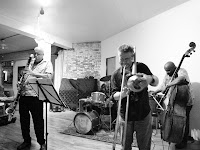 This coming weekend is an exciting one for jazz fans who live in the New Haven area as there are 2 concerts on consecutive nights guaranteed to whet one's appetite.

On Friday night (April 8), Firehouse 12, 45 Crown Street in New Haven, continues its Spring 2011 Concert Series with a visit from the Ullmann/Swell Quartet.  Originally formed in 2004, the four-some is known for its intense music, intelligent improvisations and creative interplay. The front line of Gebhard Ullmann (saxophones, clarinets) and Steve Swell (trombone) works extremely well together; both great soloists, they often intertwine their lines to create thorny and handsome aural landscapes.  The veteran rhythm section, bassist Hill Greene and drummer Barry Altschul, can be both propulsive and fiery, whisper-soft yet forceful.  Over the years, the group has issued 3 CDs but its best milieu is the live concert.

To find out more about the band, go to www.gebhard-ullmann.com.  To order ticketsor for more information, call 203-785-0468 or go to www.firehouse12.com. 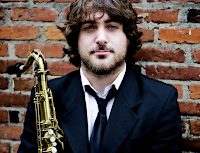 Earlier this year, the 24-year old tenor saxophonist, a Connecticut native, issued his 2nd CD as a leader, the exquisite sounding "Before the Rain" (Palmetto Records.)  Featuring the sensitive accompaniment of pianist Frank Kimbrough, bassist John Hebert and drummer Matt Wilson, the  program consists, mostly, of ballads yet is never plodding or overtly pretty.

Kimbrough will be at the piano for the New Haven date (he is, arguably, one of today's finest pianists playing creative music) as will the splendid and irrepressible percussionist\Wilson (another modern master) but filling the bass chair will be Matt Clohesy (known for his work with Darcy James Argue's Secret Society and guitarist Torben Waldorff.)

For more information about Noah, go to www.noahpreminger.com.  To find out more about the concert and to purchase tickets, go to www.jazzhaven.org or call 203-469-9020.

The first time I heard the World Saxophone Quartet was a 1977 recording, the group's first, "Point of No Return: Live At Moers" ( Moers Music).  Noisy, raucous, intense music, I was initially put off by the challenges the music posed.  Then came the group's Black Saint debut, 1979's "Steppin' With the World Saxophone Quartet" and its funky and free title track.  The roles seemed better defined;  Julius Hemphill, Oliver Lake, David Murray and Hamiet Bluiett were like 4 brothers (but not like Woody Herman's "Four Brothers" from the 1940s), sparring, blowing hard, digging deeply into the blues and not only playing the history of Mr. Sax's instrument but creating new languages for the various reeds they played.

Then, I saw them in concert. Dressed in tuxedos, they brought the house down with their infectious take on "free" music.  Bluiett's baritone shook the wall while Murray's momentous tenor lines created fire in one's chest.  Hemphill, who would leave the WSQ in 1989 (and pass away 6 years later), and Lake worked through the melodies and voicings, creating solos that wailed, keened and often soared through the hall.

Bluiett and Murray are still at it and the Quartet has a new CD.  "Yes We Can" (Jazzwerkstatt) is a live recording from March 2009 and a concert in Berlin, Germany.  Filling out the group is James Carter (who's been with the WSQ on and off since 1995) and New Orleans-based alto saxophonist and educator Kidd Jordan.  It was Jordan who first brought the original group together in the Crescent City in the mid-70s.

The title track, composed by Murray, celebrates the recent (at that time) election and inauguration of Barack Obama.  A lively piece, with a sweet melody line that leads into a long exciting solo section before closing with variations on "Hail to the Chief" and other patriotic tunes.  Bluiett's "Hattie Wall", the official theme song of the WSQ, opens and close the program, the horns moving together and separately to create a bluesy dance that occasionally erupts into short, electrifying, solo sections. The low notes on the baritone can still shake the speakers. Jordan's "The River Niger" opens with each player working on a melodic fragment before moving into a handsome melody that moves sensuously along atop the rich baritone line. Murray's "The God of Pain" is a richly realized ballad that echoes works by Duke Ellington and Billy Strayhorn; the long, unaccompanied tenor solo moves way up into the stratosphere and leads into the faster yet still melodic "The Angel of Pain." - the music moves "out" and the rhythm is implied but the intertwined lines are rich with ideas. All but Jordan play clarinet on Bluiett's long and heartfelt ballad "The Guessing Game."  The work has a symphonic quality, touching on the blues that informs much of the composer's music.

"Yes We Can"  is a positive statement on many levels, not only a political slogan but a clarion call for the 21st Century as well as a resounding vote of assurance that the World Saxophone Quartet is still creative, still moving forward.  Amazingly, the band does not have a website but go to http://hamietbluiett.com to find out more.
Posted by Richard B. Kamins at 5:01 PM