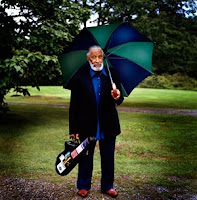 There have been a slew of tributes to Theodore Walter "Sonny" Rollins as the great tenor saxophonist turns 80 on September 7, 2010.  Over the past week, Marc Myers, of the blog JazzWax, has dedicated 2 long columns to Mr. Rollins, including one in which he travels through Rollins' Harlem neighborhood where he grew up (the major part of the article was printed in the weekend edition of the Wall Street Journal (read that here, then finish it at Myers' blog here.)

One of the great perfectionists in creative music, Mr. Rollins has confounded critics and reviewers with what some have called lack-luster groups and sub-par recordings.  But, his live shows usually transcends the bands and give viewers/listeners a glimpse of a great soloist who continues to push forward, practicing every day so that he can continue to make music on the highest level.  Go to his web site - www.sonnyrollins.com -  and watch the videos of Bret Primack's interviews.  Fascinating stuff. Long may he play. 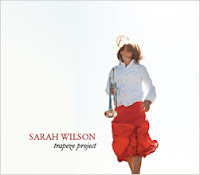 Trapeze Project - Sarah Wilson (Brass Tonic Records) - Trumpeter/composer/vocalist Wilson has created a CD with music that has influences from around the world played by a band that makes her pieces sound fresh and enticing.  Joining the San Francisco Bay area native and agian a resident (after a decade on the East Coast) is pianist Myra Melford, clarinetist Ben Goldberg, acoustic bass guitarist Jerome Harris and drummer Scott Amendola (all leaders on their own.)

The program commences with "Blessing", an up-tempo piece that sounds as if it came from the pen of South African pianist Abdullah Ibrahim with its bouncy rhythms and unison melody (and a pleasing counterpoint from the trumpet.)  Several pieces, including "She Stands In a Room" and "From The River" remind this listener of the sweet yet melancholy works of Robin Holcomb (abetted by Goldberg's woody clarinet tones.)  Ms. Melford's blues roots are apparent on the high-strutting opening section of "At Zebulon" and throughout the funeral-march blues/"second line" of "To New Orleans" that closes the program. I love the simplicity in much of what Ms. Melford adds to several of these songs, strengthening the mood instead of displaying her impressive "chops." She and Goldberg play around each other on "In Resonance Light Takes Place", her most impressionistic section on the CD. Earlier in 2010, Ms. Melford was part of drummer Allison Miller's trio on "Boom Tic Boom", showing her versatility and striking work in a group setting.  Amendola is the right drummer for this music; he is propulsive, raucous, sensitive, supportive and quite musical.  His floor-tom work on "Fall Has Arrived" gives the work its gravitas, allowing Harris to move around in counterpoint to Goldberg's melodic and solo work.  The bassist's round notes stand out on many tracks, including his work with Ms, Melford's percussive piano on "Possibility."

Despite the fact she is the leader (and wrote 11 of the 12 tracks), Ms. Wilson does not solo or even play trumpet on every track.  She has a crisp attack, fairly bright tone, but does not go in for long flights of notes or breathless solos. Her muted trumpet solo on "In Resonance Light Takes Place" is made of short, staccato, phrases and little rhythmic riffs. Her vocal work is often unadorned, rarely straying away from melody, even overdubbing a wordless vocal onto "She Stands In a Room."  Ms. Wilson takes the Joy Division hit from 1980, "Love Will Tear Us Apart", slowing it down, allowing the song to breathe - the minimalist piano is stark compared to the flurry of notes from Goldberg.

"Trapeze Project" will please adventurous listeners, at times tickling your ears or soothing them and, once in a while, even presenting challenging sounds.  Both the rewards and joys are plentiful on this most impressive recording.  For more information, go to www.sarahwilsonmusic.com.
Posted by Richard B. Kamins at 10:31 PM