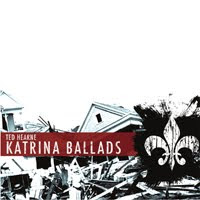 Katrina Ballads - Ted Hearne (New Amsterdam Records) - This week, New Orleans, Biloxi and other communities in the Gulf Coast area commemorate the 5th Anniversary of Hurricane Katrina. To this day, the towns and cities have been slow to recover and, when you add to that the horrific oil spill of 2010, some wonder if it will be decades and not just several more years before an sense of normalcy descends upon the region.

2 years ago this week, New Amsterdam Records issued a digital-only recording of composer/vocalist Ted Hearne's "Katrina Ballads." (my Hartford Courant review is here.) On August 31 of this year, the label releases the CD. With texts taken from television and radio interviews as well as newspaper articles, the piece served as a powerful reminder of how bad the government, local, regional and national, reacted to the catastrophe. The music combines elements of modern classical music, jazz, rock music, and opera (but no "rhythm and blues") and is a punch to the stomach of those who care for their fellow man.  Setting to music President Bush's compliment to Michael Brown of FEMA "Brownie You're Doin' A Heck of a Job" is both humorous and a caustic reminder of the ineptitude that characterized the Federal Government's original reactions to the hurricane.  There is a stunning orchestration of the Anderson Cooper interview with Louisiana Senator Mary Landrieu; it highlights the reporter's on-the-ground visions with the politician's tiptoeing around the subject of why facilities have not been set up to deal with the dead and the dying, never mind those who are healthy yet without food, water or power. The music surrounding Cooper (whose work was stellar during the tragic days and weeks following the storm) is dark, angular and foreboding while, for Senator Landrieu, the music is sweet and harmonically rich. The "Barbara Bush" piece blends the New Orleans musical influences of Louis Moreau Gottschalk and the classical side of Randy Newman with the former First Lady's insensitive comments.

The score, orchestrated for 11 musicians and 5 vocalists, never overpowers the words, instead placing them upfront, continually in the face of the listener.  The 2 instrumental "Interludes" are short yet also contain the anger, frustration and sadness that the other pieces convey.  Because the images we saw during the days of late August and September 2005 are still in our minds (thanks to the work of many documentarians, including Spike Lee and, more recently, Tavis Smiley), the "Katrina Ballads" rings loud and so true. For more information on this superb work, go to www.katrinaballads.com or www.newamsterdamrecords.com.

Ted Hearne, 28 years old, graduated from the Manhattan School of Music and Yale School of Music, where he studied composition with Julia Wolfe, Nils Viegland, Aaron Jay Kernis, Martin Bresnick, and David Lang. He's worked with numerous orchestras and chamber ensembles and is the Artistic Director of "Yes is a World", a nonprofit organization working to promote peace and social change through musical diversity and the collaboration of young artists.
Posted by Richard B. Kamins at 10:25 PM